9Barista Ushers In a New Generation of Actual Stovetop Espresso 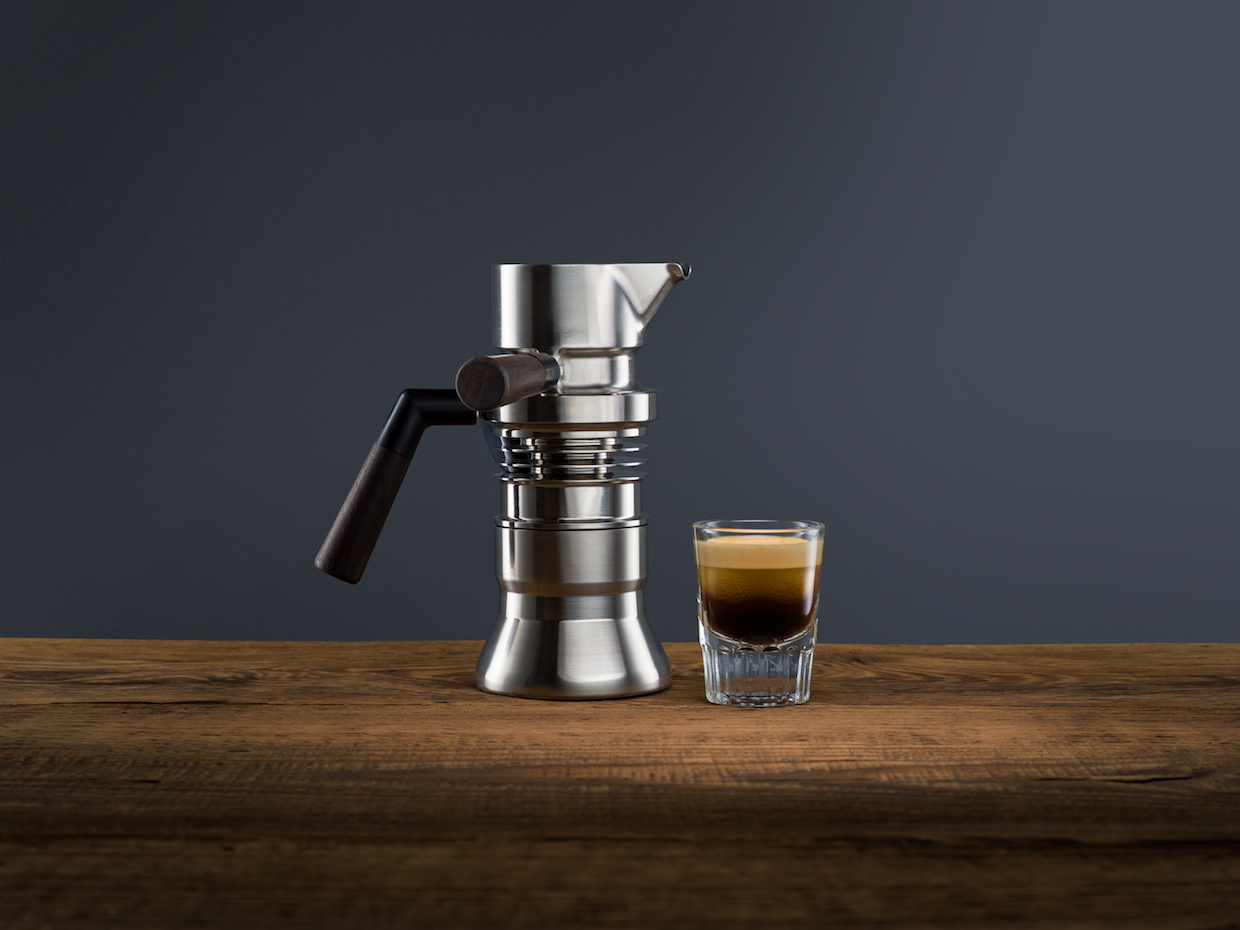 Image of the 9Barista stovetop espresso brewer. All photos courtesy of 9Barista.

For generations, the classic Italian stovetop moka pot has often been referred to as an “espresso maker,” though traditional espresso aficionados tend to scoff at the designation.

Building upon the domestic-friendly promise of the little steam brewers is the 9Barista brewer, which has emerged from the United Kingdom. Bearing some resemblance to a classic moka pot, the 9Barista introduces a dual-boiler design that actually yields an espresso akin to what’s made on commercial coffee bars, according to its makers.

Invented by Cambridge-based jet engineer Will Playford, the 9Barista features a high-pressure boiler on the bottom that, when heated to accumulate precisely 9 bars of pressure, sends super-heated water through a calibrated spring-loaded valve into a heat-exchanger coiled inside a second, upper boiler.

The upper boiler is not pressurized, and freely allows steam to escape through a little exhaust chimney on one side.

“That’s key to what is unique — and patented — about 9Barista,” Playford told Daily Coffee News. “The upper boiler uses the property that boiling water open to the air must be at 100°C, at sea level.”

Playford said users can warm their espresso cups over the steam chimney if they want. Meanwhile, after passing through the central coil where it drops from 179°C (354.2°F) to 100ºC (212°F), the water then passes through a third chamber in which another heat-exchanger, this one of a cool-looking exterior fin design, further dissipates the heat down to an ideal 93°C (199.4°F) before at last the water completes its journey upward through a finely ground, 53-mm bed of tamped coffee.

The device is physically split into three parts. At the bottom is the lower boiler that the user fills with water to a fill line, amounting to 120-ml. Next comes the middle assembly that contains the upper boiler and the fin heat exchanger, and when screwed down onto the lower part, automatically divides the water between the lower and upper boilers. 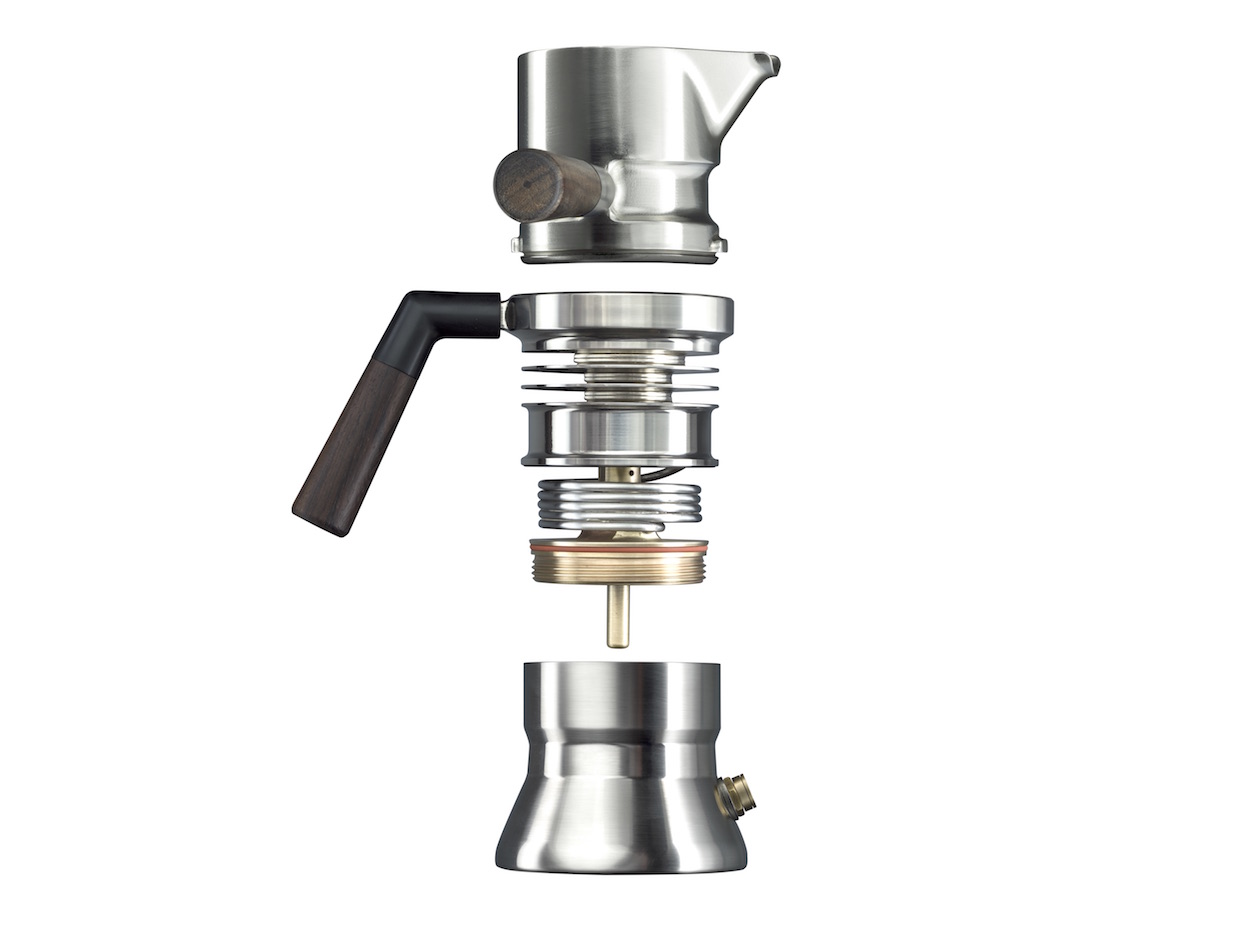 An exploded view of the 9Barista stovetop espresso brewer.

At the top is the top cup and portafilter. The user starts with this part inverted, with the cup upside down on the counter. The bottom of the cup is a 53-mm portafilter. The user grinds and tamps with the included tamper or any other fitting tamper. The ideal dose is roughly 20 grams, upon which a soft silicone “basket cap” is then inserted to keep the coffee bed suspended after the user flips it to screw it down onto the top of the 9Barista for brewing. Playford said that for properly finely ground doses, the cap turns out not to be really necessary, but they include it anyway.

With 9 bars of pressure driving water at precisely 199°F through the tightly tamped coffee, what’s purported to emerge is a rich, sweet and balanced 40-gram espresso, smothered in golden crema and ready to be poured off into a demitasse. Users need not watch the burner or make any adjustments for the system to perform identically every time, according to 9Barista.

“The pressure and temperature profile are fixed,” said Playford. “We wanted to keep the machine as simple and reliable as possible.”

The top cup, portafilter, fin heat exchanger, valve body and high pressure boiler are all cast in brass, and all seals are standard metric silicone O-rings. It is fitted with an additional boiler safety valve that opens at 12 bar, and is manufactured in the UK.

Playford studied jet engineering at the University of Cambridge prior to co-founding Cambridge Aerothermal, which develops high temperature measurement instrumentation for power and propulsion industries. Following an obsession with fine espresso, Playford spent five years designing the 9Barista prior to launching a successful Kickstarter campaign to the tune of £54,000+ (about $70,000 USD) earlier this year.

The first round of finished products has recently shipped to backers, with a second production run occurring now that has included slight tweaks based on user feedback and for manufacturing efficiencies. While no additional accessories or iterations are currently planned, Playford said that there are sketches in existence of a machine with a steam wand, “along with some other top secret, longer term schemes.”

Pre-orders for the second production run of the 9Barista, slated to ship by the end of this month, are open at the company website now for £295 (about $382 USD).