John McAfee on Quorum Sensing and His Coffee Company

Update (May 13): John McAfee contacted Daily Coffee News today to confirm that he launched  the roastery New River Coffee Company in Belize and carried on a supply relationship with a coffee bar called Sail Away Cafe in San Pedro. “I transformed the laboratory into a coffee roasting building, cornered the market for Belizean grown beans and started up,” McAfee told Daily Coffee News. “Our capacity was 2,000 pounds per day — a small business.”

One of the most bizarre stories currently making headlines in the specialty coffee world is that of how John McAfee, the infamous British-American anti-virus programmer, admitted drug smuggler and political refugee following the murder of his neighbor in Belize, came about starting a coffee company. 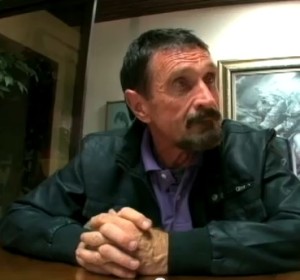 Equally bizarre is that the coffee company doesn’t seem to exist. In a recent online Q&A with the readers of Slashdot, McAfee discusses how his “New River Coffee Company” came about. He says:

I became interested in quorum sensing (the means of communication favored by bacteria) the instant I heard about the concept. I hired a young Phd who had written the definitive paper on the subject – a young woman named Allison Adonicio – and set up a lab in the jungle to research anti-quorum sensing properties of tropical plants. You can read all about it at quorumex.com. Against all odds, the woman turned out to be crazier than myself. After a year and a half, the fractured elements of her psyche reassembled themselves into an exact likeness of a snarling ferret and she self destructed. She destroyed all of our research results, destroyed our bacteria samples, erased the hard drives of our computers, destroyed our carefully collect plant samples and went home to Boston. I cogitated the situation for a brief period, said “Fuck it!” And went into the coffee business. Thus was formed the New River Coffee Company.

Of course, anything is within the realm of possibility when John McAfee is involved, but there doesn’t seem to be any evidence that the New River Coffee Company exists, either in his recent refugees of Portland or Guatemala, or anywhere else.

If you have any information about McAfee’s New River Coffee Company, contact us privately or leave a comment below.