A Chicago conservationist is hoping to divert tons of coffee grounds weekly from landfills through the use of what he is calling “nature’s little recyclers:” earthworms.

Ed Hubbard has launched an Indiegogo crowd funding campaign for the project, with a goal to raise $6,000, most of which would be used to collect and transport used grounds from participating coffee shops throughout downtown and the Near North areas. The headquarters for the composting of grounds would be The Plant, a downtown Chicago nonprofit urban agriculture center. 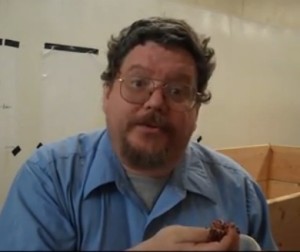 “Most of the six tons of coffee grounds used in Downtown Chicago alone on a daily basis is heading for a landfill,” Hubbard says in his campaign. “Since Cook County banned all new landfills five years ago, this is a huge pressure on the system. Worse yet, coffee grounds and other organic waste that decompose at a landfill create methane gas, a greenhouse gas twenty-five times worse than CO².”

The short-term goal? To collect grounds from 20-24 shops initially, and turn them into compost using “vermitechnology,” primarily with red worms and night crawlers.

“What earthworms produce is compost, which makes up part of what we call soil,” says Hubbard. “They create a very rich material called vermicastings, a.k.a. worm poop, and it is a highly concentrated form of natural fertilizer. This material contains 60 known nutrients, elements, and trace minerals needed for healthy plant life, combined with a beneficial microbial base to help your plants utilize this rich food. It is the most “luxurious” food your plants will have ever tasted.”