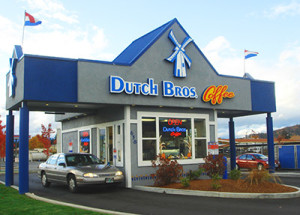 In a retail industry that has slim margins every step of the way, this kind of generosity seems a step above the rest.

The Eugene/Springfield-area locations of the Oregon-based drive through chain Dutch Bros. Coffee tomorrow, July 24, are offering all drinks for $2, and donating all money raised to the Lane County Chapter of American Cancer Society (ACS). The 15 stores raised $42,519 for the ACS last year, and the owners are shooting for $100,000 this year.

Husband-and-wife team Jonah and Brittany Boersma own seven of the 15 participating stores, while Chris Stewart owns the other eight. “It feels great to live in a community that supports a wonderful organization like the American Cancer Society Relay for Life,” says Stewart. The Eugene/Springfield Relay for Life event will take place July 26-27 at Willamette High School. with Dutch Bros. providing coffee service and donating the proceeds.

This is the eighth year Dutch Bros. has participated in the event. Click here for more on Dutch Bros., including locations.