One or more kind-hearted strangers in Canada have a serious case of Caffe Sospesso fever.

Three separate reports of incredible pay-it-forward coffee kindness have surfaced in Calgary, Ottawa and Edmonton, where unidentified patrons have prepaid for 500 coffees (worth $800+ dollars) at Tim Horton’s locations in each of the cities. The coffees then go to the next patrons who order coffee. 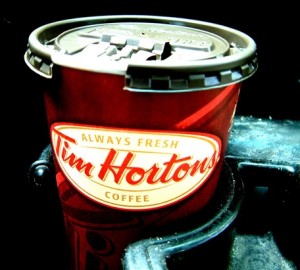 The trend began Monday in Edmonton, with a man asking the manager of a Tim Horton’s how many coffees they typically sell in a day. Here’s more from Yahoo News:

On Monday afternoon, a man in his mid-20s walked into a downtown Edmonton Tim Hortons and ordered a double-double and a Boston cream doughnut.

Then he asked the cashier how many coffees she typically sells in a day — and asked her to ring in an additional 500 large coffees.

“The manager asked him if he was going to drink all those coffees or was he going to give it to someone?” store manager Joanne Averion told the Canadian Press. “He said, ‘You have to give it to the next 500 customers.'”

The act was then repeated in other cities throughout the week. Here’s the latest report from Canada’s National Post:

None of the three strangers have yet been identified. An Ottawa man’s gesture was the latest, as he paid for $860 worth of coffee (about 500 large cups) Thursday morning at about 6:30 a.m. at the chain’s Terminal Avenue location.

An old tradition in Italy, Caffe Sospesso (suspended coffee) seemed to gain traction in coffee shops throughout the world earlier this year, after the practice inexplicably flared up in Bulgaria.

Not nearly to this scale, but I’ve had that happen at my cafe. The guy doing it referenced his time spent in Italy, too.