Two pioneers in the Hawaiian culinary and coffee worlds have teamed up to promote coffee from Ka‘u region of the big island, which has historically been known for sugar cane production. 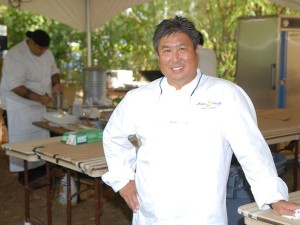 One of the co-founders of Hawaiian regional cuisine, restaurateur Alan Wong has been working with Honolulu-based Hawaii Coffee Company and its president, Jim Wayman, for two years to develop a line of Ka’u coffee from the Ka’u Coffee Mill, according to a recent Pacific Business News report:

Wayman said the initial launch of the coffee line cost the company about $150,000, which included about $100,000 to purchase the coffee from the Kau Coffee Mill, and about $50,000 to develop the packaging and product line. A seven-ounce bag of the coffee will retail for $4.99.

(more: Hawaii Coffee Farms For Sale, from Rustic to Luxurious)

Wayman for years has worked to promote Kona and other Hawaiian coffees, most recently providing a leading voice in attempts to get funding for borer infestations that have hurt production throughout Hawaii. Wayman told PBN that Ka’u currently has about 600 acres of coffee farmland, but that he sees the potential for 3,000 to 4,000 acres. Farmers have been growing coffee in Ka’u for more than 15 years, but only in recent years through events like the Ka’u Coffee Festival and appearances at SCAA competitions has the industry begun to build a name on quality.