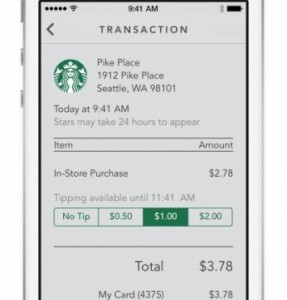 With untold bajillions of sales on a daily basis, Starbucks has arguably become the world’s biggest beta testing lab for quick-service POS operations.

The company recently announced new developments on this front, including two new features on its iPhone app: a tipping system and a “shake to pay” feature. The two updates are only available for Apple iOS and will be usable at some 7,000 company-operated U.S. stores beginning March 19.

The shake-to-pay feature simply allows users to call up their Starbucks rewards app by shaking their iPhone and bypassing any other app that may be active. In practical terms, this allows users to continue playing Candy Crush right until the moment they are asked to pay.

The tipping feature, meanwhile, seems unbelievably late in coming. It allows patrons to press a button to tip in denominations of $0.50, $1 or $2. Starbucks says it developed the feature since it was the most popular suggestion among consumers on at MyStarbucksIdea.com, an Starbucks-run consumer feedback feature. It is unfortunate that Starbucks waited for the pleas of its consumers to make digital tipping for baristas a reality. But better late than never.

Starbucks says nearly 10 million consumers use their mobile app, and some 11 percent of the company’s U.S. sales are through mobile devices.