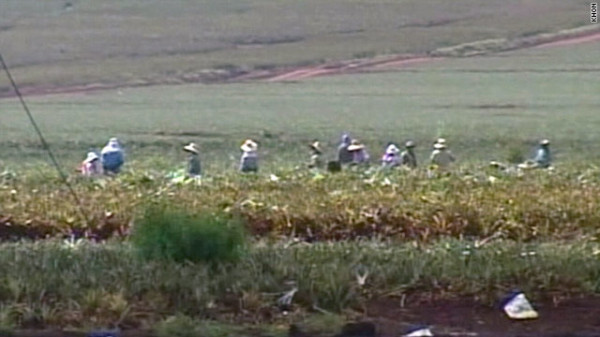 The farms were implicated in the three-year suit after working with California-based labor contractor Global Horizons, which remains a defendant in the suit along with Maui Pineapple Company. A District Court judge ruled last month that Global Horizons is “liable for the pattern or practice of harassing, discriminating, and retaliating against hundreds of Thai farm workers in the U.S. based on their national origin and race, in violation of federal anti-discrimination laws.”

Phirom Krinsoongnoen, one of the affected Thai farm workers, told the EEOC, “We worked and lived under terrible conditions, treated like animals in a cage. We were housed in an overcrowded place with a few rooms but many workers, and threatened almost daily. I am grateful that the EEOC is here to help people like me.”

The EEOC alleges that Thai farm workers were contracted through Global Horizons to work at the farms sometime between 2003 and 2007 under the H2-A temporary visa program, which requires farm workers to be provided food and housing aside from pay for work performed.

“Exorbitant recruitment fees placed the Thai workers into a situation of debt bondage early on,” the EEOC said in an announcement yesterday. “Workers were then subjected to varying degrees of the denial or delay of pay, monitoring movements and confiscating passports, production quotas that non-Thai workers need not adhere to, denial of adequate food and water, and unsanitary, overcrowded living conditions. Those who complained of the pattern or practice of discrimination and harassment were retaliated against, with many forced to quit or flee as a result.”