As part of the Hawaii Coffee Association’s (HCA) 19th Annual Conference and Trade Show, the public was invited to tour three award-winning Kona coffee farms on Sunday, July 20, 2014. The tour stopped at Kona Mountain Coffee, Arianna Farms ‘Ono Kona Coffee, and Buddha’s Cup, with a bonus stop at Kona Earth at the end.

Tour guide Gary Strawn, who owns Kona Earth, gave a brief history of Hawaiian coffee, which began in the 1800s with Guatemalan beans, now known locally as Kona typica, and has evolved to include a number of different varieties and hybrids. The average Kona coffee farm is about five acres, but the three farms featured on the tour were significantly larger.

Tour guide Gary Strawn gives the group an up close look at a coffee tree at Kona Mountain Coffee farm.

The first farm, Kona Mountain, currently produces coffee on about 70 acres. The farm took first place in the Kona district and fourth place in the statewide creative category during the HCA’s cupping competition this year. Kona Mountain’s farm manager, Mark Santiago, demonstrated how arabica coffee plants are grafted onto liberica root stocks to produce plants that are resistant to the nematodes that plague the area’s coffee farms while maintaining the exceptional taste one expects from Kona coffee.

Bob Wood, co-owner of Arianna Farms ‘Ono Kona Coffee, explains the farm’s processing methods and the reasoning behind them on the HCA tour of Kona coffee farms.

Arianna Farms manager Kraig Lee shows off a custom rake he built to dry coffee on the farm’s drying porch.

Sharon and Bob Wood of Arianna Farms ‘Ono Kona Coffee recently completed work on a new mill on the smaller of their two Kona coffee farms.

After taking a look at Kona Mountain’s processing equipment and drying porch, the tour moved to Arianna Farms ‘Ono Kona Coffee. Arianna Farms’ owners Sharon and Bob Wood — along with their teenage daughter, Arianna, for whom the business is named — operate two coffee farms in Kona. The tour group visited the smaller of the two, with 8.5 acres leased from Kamehameha Schools. Much of the farming land in Hawaii is leased from the school district, which was granted ownership of more than 365,000 acres of land in 1883 as part of a bequest from Princess Bernice Pauahi Bishop, the last royal descendant of the Kamehameha line. The larger of the Woods’ farms, which covers about 30 acres, is inaccessible by tour bus.

The Woods, who purchased their farm after falling in love with the island on their honeymoon during the 1990s, currently split their time between Hawaii and California, where Sharon works as a clinical psychologist and Bob an anesthesiologist. Not surprisingly, they take a scientific approach to farming, focusing heavily on experimentation, documentation and assessment in nearly every aspect of the operation. The group toured the farm’s new mill and Bob Wood discussed a number of different methods they’re testing to achieve cost and energy efficiency while producing consistently high-quality Kona coffee beans.

Buddha’s Cup owner Manny Ochoa shows visitors a vast array of plants on the driveway leading to his coffee farm and mill.

Buddha’s Cup owners Manny Ochoa and Sharon ?? welcome visitors with drinks, snacks and a shop. The farm is open for public tours seven days a week.

The mill at Buddha’s Cup Coffee in Kona, Hawaii.

The next stop was Buddha’s Cup. Farm manager Manny Ochoa met the tour bus at the foot of the farm’s long and winding driveway, then escorted us up the hill to the house and mill. Along the way, Ochoa regaled the group with tales of growing up raising cattle in Mexico and working as a logger in Oregon before moving into coffee farming in Kona. He also shared his extensive knowledge of the diverse flora on the property, which seemed more like a botanical garden than a driveway.

At the top of the hill, Buddha’s Cup owner (and Ochoa’s wife) Christine Coleman welcomed the group with a variety of coffees to taste — including a naturally processed coffee. She also served a few different teas, including a green coffee tea, and some fresh baked goods. Ochoa and Coleman, along with a small herd of adorable and affectionate dogs, offer public tours of the property seven days a week. 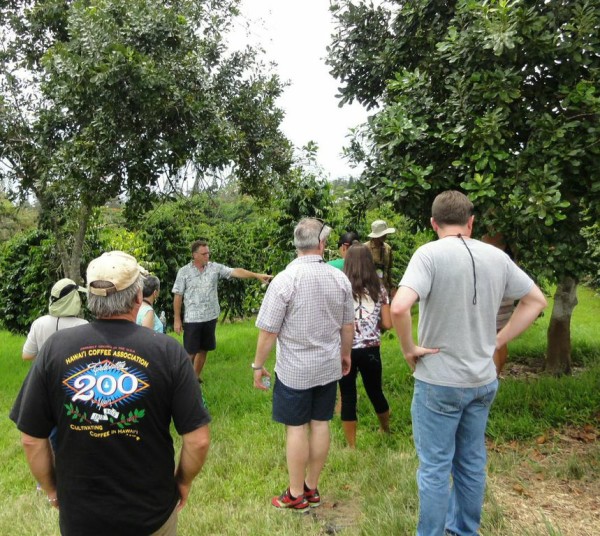 A quick stop at Kona Earth Coffee farm featured the shade of some
macadamia nut trees, a common companion to coffee trees on Kona farms.

The last stop on the tour was a quick, unplanned peek at tour guide Gary Strawn’s Kona Earth farm, which neighbors Buddha’s Cup. Perhaps the most interesting aspect of Strawn’s story is how he ended up farming coffee in Kona in the first place. Working as a game designer with Electronic Arts (EA) in Los Angeles, he realized life was too short to spend indoors, and when he visited his mother on the island of Hawaii, he decided he’d like to try his hand at coffee farming. Not long after, Strawn called his wife and two young daughters and told them he’d bought a farm in Kona. Miraculously, they’re still married nearly a decade later.

While the basic growing and processing techniques are similar from farm to farm, each provides a remarkably unique view of coffee farming in Kona. Planting, pruning, weeding, milling and drying methods vary with each operation, and each farmer has his or her own style. While the Woods approach farming from a scientific perspective, for example, Ochoa waxes poetic about how the phases of the moon affect planting, and how he treats his plants as if they were his girlfriends, cajoling the remarkable results he hopes to reap from each bean.

If you enjoy a great cup of coffee, touring a coffee farm is a wonderful way to broaden your knowledge and gain a newfound appreciation for all the hard work and thoughtfulness that goes into creating each exceptional cup. Some Kona farmers, like Buddha’s Cup, welcome visitors during regular hours, and several others will welcome you for an individual tour if you get in touch before you visit. If you have a favorite Kona coffee, don’t hesitate to email the owner before your next trip to the big island and ask to go behind the scenes to see for yourself where the magic happens — from seed to cup.

This information is a little old. The best coffee farm tours now our Mountain Thunder Coffee Plantation and Hula Daddy. Both are close to Kailua-Kona and are the closest farms to the Waikoloa area. Both offer excellent complimentary tours.