A Tale of Water Disasters, Michael Cera and the Randomness of Barista Life

You’re having a rough few days on the job. Nothing is working as it should, forces beyond your control are conspiring against you, you’re tired, covered in coffee waste and you can’t even shower. The next morning you wake up and everything returns to normal. You see a lanky figure out of the corner of your eye, look up, and who gives you an endearingly awkward wink as he sips a cappuccino? It’s film star Michael Cera.

Yes, everything is going to be alright.

This is the short and only somewhat embellished version of events that unfolded over four days in Toledo, Ohio, last week.

It began with a freak city-wide water ban announced during the early morning of Saturday, August 2. Officials discovered dangerous levels of the toxin microcystin in the city’s water supply, believed to have been elevated from algae blooms in Toledo’s water feeder, Lake Eerie. The toxin can cause abdominal pain, vomiting, kidney pain and even death. Needless to say, it is not the kind of stuff you can have running through your group heads.

Like many of the city’s other foodservice businesses, the team at Bleak House Coffee had a quick decision to make: Stay open or shut down. Unlike most of the city’s businesses, they chose the former, with owner Scott Ciolek racing straight North to Ann Arbor, Mich., — about an hour drive each way — to find a sufficient supply of bottled water.

“At first my partner and I were like ‘I don’t see how we’re going to do this,’ Dakota Cousino, who helps run the shop with Eileen Iannone, tells Daily Coffee News. “The entire town was in an uproar. There were police officers guarding the water aisles in all the grocery stores in town. It was madness.”

With a few cases of Smart Water 1-liter bottles, Cousino and Iannone did everything they could to hold the shop together, shutting down the batch brewers and espresso machine in favor of V60 pourovers. Not wanting to risk it, they tossed the previous day’s batch of cold brew, instead offering customers whatever they could find from their coolers and scratch bakery that couldn’t possibly be contaminated. 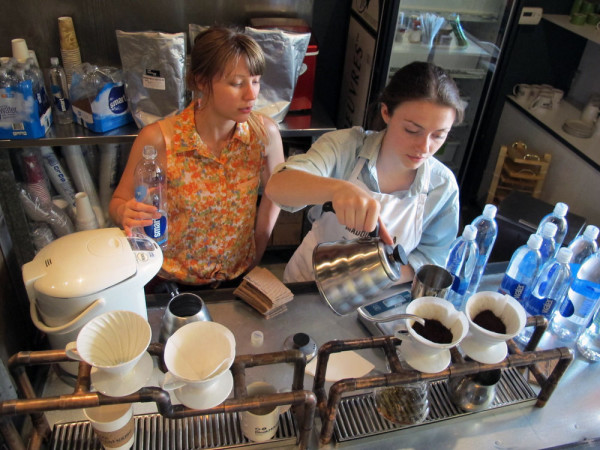 “We had a big water-heater brought in and we just did pourovers all day,” says Cousino. “Even though we weren’t any more or less busy than normal, it felt a lot different. I wouldn’t leave the pourover station for hours.”

While pourovers are a regular menu offering at the shop, which carries coffees from Chicago’s Intelligentsia and Perrysburg, Ohio’s Maddie & Bella Coffee Company, Cousino says she was worried about the extra dollar per cup the shop had to charge to make up for the water costs. “We didn’t really get any complaints,” she says. “Mostly, people seemed grateful to have a gathering place outside of their home where they could get together, have a coffee and talk about everything that was going on with the water. We were one of the only places in town.”

(related: Loyal Customer Hopes to Give Back As New York Shop Is Destroyed by Fire)

This continued through Monday afternoon until, in dramatic fashion, Toledo Mayor D. Michael Collins downed a glass of city water at a press conference and declared the ban lifted. By Tuesday, everything at Bleak House was back to normal, with the exception of a few customers who still didn’t trust the city water and insisted on Smart Water pourovers.

Then, around 10 a.m. in walks Michael Cera, who proceeds to order a cappuccino, shake a few hands, kiss a few babies and take a few photos. 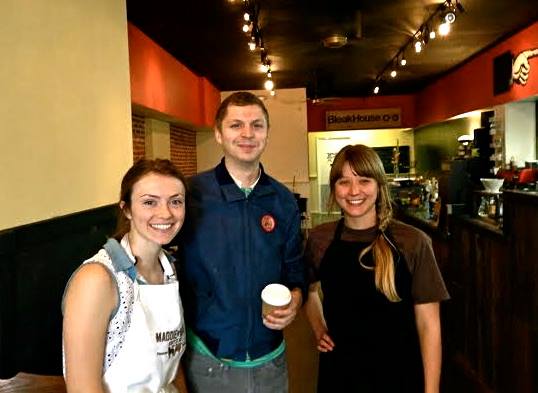 The story goes that Cera was just passing through with a friend, from New York to Chicago, or presumably somewhere on the West Coast, and happened to stop in for a coffee in Toledo. But could this really be a coincidence? One in an endless series of random acts that defines our existence as human beings?

Says Cousino, “It was just a crazy few days.”