Monthly C-Market Report: 2014 Could End Up a ‘Reasonably Balanced’ Market 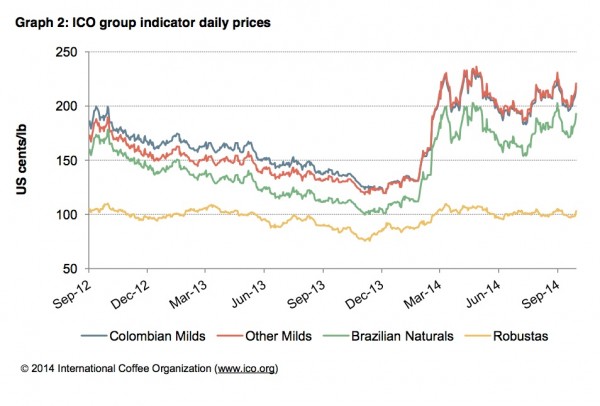 Crop year 2013/14 is now finished in all exporting countries, and despite a year’s worth of speculation and persistent price volatility, total global production is nearly unchanged from last year at 145.2 million bags, according to the latest estimates from the International Coffee Organization.

Meanwhile, the official Brazilian crop forecasting agency Conab released its third 2014/15 crop report in what has been a tumultuous year in the world’s largest producing country. The group has upgraded the outlook slightly to 45.14 million bags, largely on the strength of robusta, which Conab revised up by 5 percent to an all-time high to 13.03 million bags, according to the ICO report, while Brazilian arabica estimates have been downgraded to a five-year low of 32.11 million. The ICO suggests there are also “mounting concerns” over Brazil’s 2015/2016 crop.

The total global production estimate of 145.2 million bags for the 2013/14 year is just 200,000 bags over the previous crop year, with dramatic losses in Central America due to leaf rust being made up for by higher-than-originally-forecast levels in Brazil and Colombia. The ICO says world coffee consumption was approximately 145 million bags in 2013, suggesting that the 2014 production and consumption totals should result in a “reasonably balanced market,” although the group warns of a 2014/15 crop year production deficit amid rising consumption.

One of the most striking observations from the report relates to the 2014/15 production forecast, with the ICO saying that “a slight recovery is expected in parts of Central America, as the damage from coffee leaf rust is starting to plateau,” adding, “Nevertheless, the social and economic damage to the region is on-going and should not be underestimated.”

(related: A Conversation with Ric Rhinehart on the Future of Coffee in Mesoamerica)

As for coffee prices, the ICO’s composite indicator averaged $1.617 in September, just a 0.8 percent decrease from the August average, despite volatility throughout the month that saw a high of $1.764 to low of $1.536.