How These Brewers Are Changing the Silly ‘Barista-Quality’ Concept

As the craft coffee retail segment continues its growth throughout virtually every corner of North America, its influence on the home brewing segment is undeniable.

Home equipment makers have been beating consumers over the head with infuriating compound adjectives like “barista-quality” or “cafe-quality” for decades, and that continues today. What’s changed is the meaning of those terms, as a target audience that was once aligned with second wave chains is now more closely aligned with craft purveyors big and small.

For example, look no further than at these two coffee makers currently raking in funds on Kickstarter: The Bruvelo and the Arist. The Bruvelo claims to automate the “timeless tradition of handcrafted coffee,” while the Artist claims to “brew coffee like the world’s best baristas at the tap of a smartphone.” These claims have plenty of inherent flaws — among them, the fact that there is plenty of poorly brewed coffee sold in cafes — but there’s a lot more mechanical and technological firepower behind these “cafe quality” claims of yesteryear. 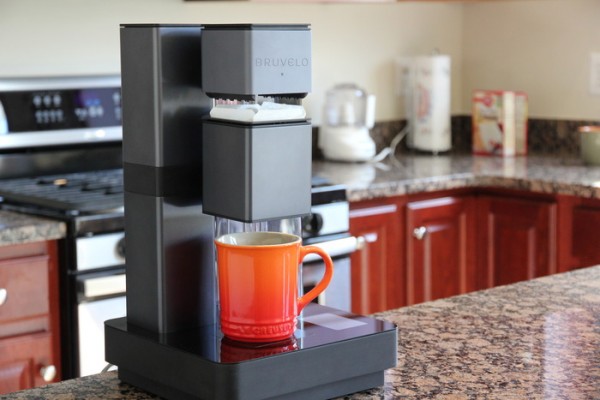 Designed by Virginia-based software engineer Dustin Sell, the Bruvelo is essentially an automated single-cup system that accounts for many of the variables at play in a retail pourover bar environment. Its built-in features include a scale down to 0.1g accuracy, a ceramic burr grinder, a carbon block water filter, a heating element that maintains water at 199⁰F and a variable-flow shower head. Meanwhile, the brew cycle includes a pre-rinse of the standard 01 paper filter and a bloom cycle.

Users can brew to one of three automated profiles with the push of a single button, or they can manually control grind size, water temperature, grounds-to-water ratio and steep time, all through a smartphone app. The app, of course, allows for additional features like saving recipes.

“I really began to study what it takes to brew a cup of ‘competition-level’ coffee according to the SCAA Coffee Brewing Control Chart,” Sell recently told Daily Coffee News, adding that the represents his following a passion after working for 10 years at Microsoft. “So I actually bought a coffee refractometer from VST Labs which I used in my own pourovers, and modeled the Bruvelo after those processes, wanting to obtain the best possible extraction ratios.”

As of this writing, with 25 days left in the Kickstarter campaign, the Bruvelo Kickstarter had earned nearly $90,000 toward its $150,000 goal. 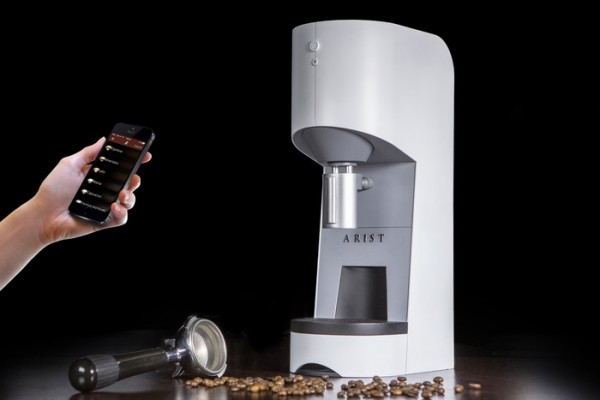 With a design and business team lead by another former Microsoft software engineer, Benson Chiu, the Arist is also synced to an app, with built-in controls for grind size, ground coffee weight, water temperature, pressure and flow rate. A single stored recipe can be repeated with a press of the machine brew button, other recipes are available through the app, or users can customize each of these variables.

In many ways, it is the espresso equivalent to Bruvelo’s pourover. Key mechanical features of the Arist include a bean hopper, a conical burr grinder, a milk frother, a syrup capsule container, a mixing chamber an extraction control module and an NFC reader designed to read stickers associated with specific recipes on the bottoms of cups.

“Traditionally, it’s the job of a barista to accurately brew any given bean into a perfect cup of coffee, but inconsistency is always a huge problem due to human error,” the Arist team says on its Kickstarter.

The approximately 20-person team — split between San Francisco and Hong Kong — behind Arist not only has the support of the Hong Kong government, it also has enlisted the help of serious coffee people, including licensed Coffee Quality Institute licenced Q-Grader and SCAE-certified barista trainer Yeung So (Chris) Fan.

The fallacy with these machines is that they treat the novelty of smartphone application control as somehow 10x more important than actually holding a proper brewing temperature constant, which is where most of these devices fail completely.

As a long-time home coffee enthusiast, I remember the days when you could *only* trust the dedicated home barista to make better coffee than any of the coffee shops or professional baristas could. In 10 years that marketing has flipped on its head.

“These claims have plenty of inherent flaws — among them, the fact that there is plenty of poorly brewed coffee sold in cafes…”

You are kidding, right?

The Arist Kickstarter project is an unmitigated disaster.