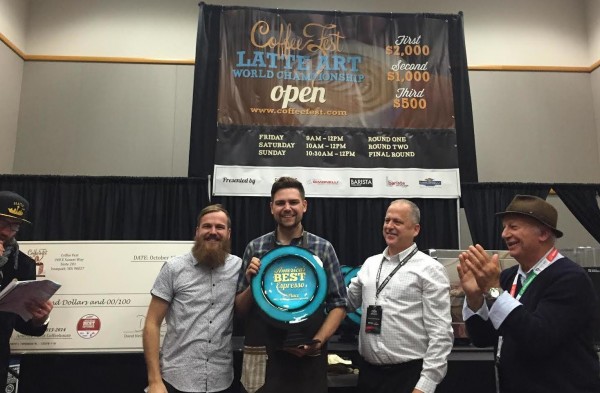 Sunergos came to Portland after taking the top spot at Coffee Fest Chicago in 2013, which served as a regional competition platform for the national finals. Given the bucket-loads of fantastic shots pulled daily throughout the United States and Canada, we reached out to Sunergos Co-Founder Matthew Huested to find out what all went into making the one deemed “best,” as pulled for judges by Sunergos Wholesale Director Kenny Smith.

“I don’t know what other people’s processes are going into these competitions,” says Huested, who views the entire competition experience foremost as a platform for craftsmanship, collegiality and coffee discovery. “I’d love to know what kind of effort others are putting into this, and how it compares to ours.”

Theirs is intensive. First, as Donald Rumsfeld might put it, there are known knowns that Sunergos brought to the competition (the coffee; the skill of the shot puller; the grinders), and known unknowns that awaited them in Portland (the water supply; the Black Eagle espresso machine supplied by Nuova Simonelli; the skills of the other competitors). 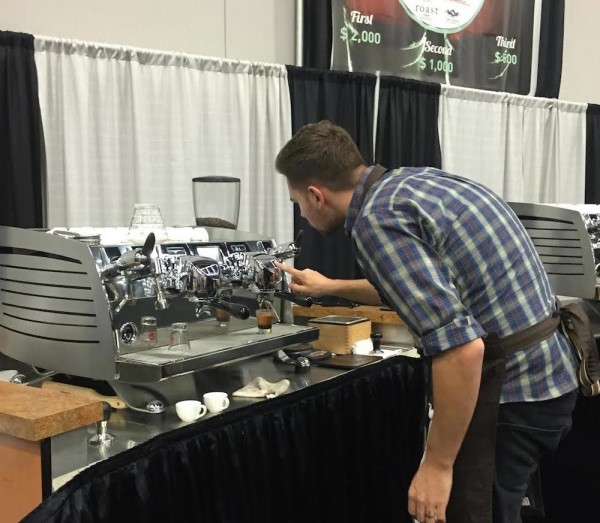 Kenny Smith dialing it in.

The first known, the coffee, begins with coffee selection based on the judging criteria — in this case, the three primary criteria were flavor complexity, mouthfeel and appeal, and aftertaste. The Sunergos team made an early decision to reach out only to suppliers they know and trust. “Our approach with this competition was a little different; We wanted to base everything on long-standing relationships,” Huested says. “We trust them, for one, but they’re also a huge part of the work we do already.”

Sunergos then collected numerous coffees and began roasting and cupping, sampling each coffee with different roast profiles and at various times removed from the roast, at the cupping table and in shot form with various extraction parameters. “Eventually, we narrow it down to one coffee that we’re pretty much sure we’re going to take, then we start the whole process over again with different roast profiles and different extraction profiles,” Huested says.

For their winning coffee, Sunergos settled on a “zero defect” washed Ethiopia Yirgacheffe supplied by their longtime partner Samuel Demiss at Keffa Coffee, who emigrated from Ethiopia to the United States in 2004 and maintains direct relationships with the farms around which he grew up. “Zero Defect” is a term Keffa uses to describe its coffees that have been triple-sorted manually, says Huested.

In roasting and cupping the coffee countless times, inviting friends and colleagues from the Louisville coffee community to share their thoughts, and arguing the merits of a particular roast or extraction, consensus can be hard to come by. “We narrow down, narrow down, narrow down,” he says. “Even then, there are some different opinions among us. Kenny Smith, he was rock solid and certain about this coffee; but he was not 100 percent certain about this roast profile. I was not certain about either. However, the beauty of that is none of us are alone in this. We have a team of people making this decision.”

As it turns out, the decision was correct.

Totally agree and was a real pleasure to be a judge of the competition in Portland.