In Defense of the Caturra Variety: A Conversation with Alejandro Cadena

When I read this article by Kenneth Davids in The Coffee Review assigning Caturra to the second tier of varietal quality, I thought immediately of Alejandro Cadena, whose pioneering Colombian exporter Virmax can stake a solid claim to intellectual and material authorship of the microlot model.

Why did I think of Alejandro? Because when he visits coffee farms Colombia, he wears a tee shirt with this message emblazoned across the chest: 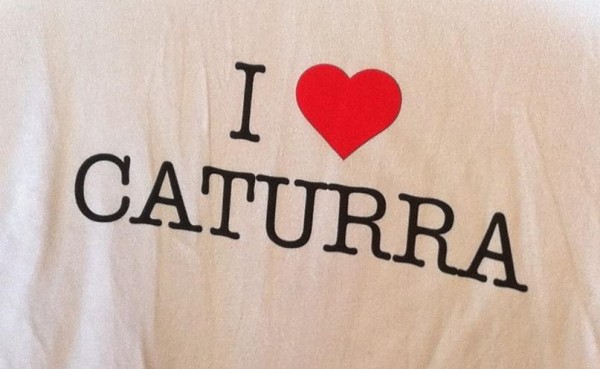 Today I talk with Alejandro about the coffee variety he loves. It should come as no surprise that he rejects both The Coffee Review assertion that Caturra has second-class genetics, and my suggestion here that current incentives for Caturra may not be sufficient to save it from extinction.

The questions and answers below are the ones I consider to be the highlights of the conversation. You can download the full transcript of the discussion here.

What is the message you are trying to communicate to growers around the question of varietal selection, both with your tee shirt and your direct conversations with them?

We have never told any producer not to plant Castillo or even worse, to eradicate their Castillo trees. For us that is a personal decision. When they ask us what to plant, we give them all the facts we have, both pros and cons of each variety. We make it clear that it is their decision and that whatever they decide will have an impact on their earning potential and their access to the specialty market over the next 5 to 10 years.

The t-shirt was done in response to a massive campaign in Colombia, starting in 2009, that asked farmers to uproot their Caturra trees and replace them with Castillo. We wanted to let farmers know that getting rid of Caturra was not the only choice and as a buyer we wanted to continue to purchase and pay top prices for their Caturra. Our message was clear: We found a significant cup quality difference in Caturra and we wanted to make sure that growers were aware of it.

I recently cited The Coffee Review position that Caturra is a second-rate variety and suggesting its days may be numbered. I suspect you don’t agree.

First, I completely disagree that Caturra and Typica are second-class varieties. I think both these varieties should be in Tier 1. One of the best coffees we source from Colombia that consistently shines is “Las Acacias” from Nelson Melo, an organic producer from Popayán. Nelson almost lost all his trees in 2009 to Roya, yet he has not planted any Castillo. The vast majority of producers who we work with in Cauca who had Caturra pre-2009 did change to Castillo. This year Nelson Melo was the only microlot producer in Cauca, with most of his coffee scoring 89+.

Second, I don’t agree that it is difficult to distinguish Castillo from Caturra in a blind cupping. We have cupped so many Castillo samples that we can now distinguish a Castillo (or even a blend of Caturra with Castillo) relatively easily. While Castillo starts out with bright acidity and sweetness, it usually displays a vegetal characteristic that is more pronounced as the cup cools, losing its balance and sweetness. That bright acidity that some cuppers enjoy turns to a metallic flavor which I describe as pencil lead, but that some cuppers in our company describe as asphalt. As coffee buyers become more familiar with those flavors, I believe that they will punish Castillo even more.

Finally, I don’t think that Caturra’s days are numbered. We are seeing a lot of producers who are taking down their Castillo and planting Caturra again. Others have decided to keep their Castillo but to plant Caturras in new areas. And they are doing this because they have seen that their Castillos usually cup below 84 points (our minimum acceptance score) and that the much higher yields promised are not really true, especially at farms at higher elevation.

So you do believe that there is a sensory basis for a variety play for Caturra?

Absolutely. I have no doubt that Caturra is a variety that can produce an exceptional cup quality, on par or even better than Bourbon, SL28, Pacamara and Typica, at least in Colombia.

Do you believe buyers are creating sufficient financial incentives for Caturra?

I think it’s still too early to tell. Only now are buyers beginning to fully grasp the distinction between Castillo and Caturra. Once specialty buyers fully understand the differences (in cup quality, risks, production costs and yields), if they want to get high quality Colombian coffee they will have to be willing to provide significant financial incentives for Caturra. And these incentives will have to be even more substantial for organic Caturras (or any other variety that is not rust-resistant).