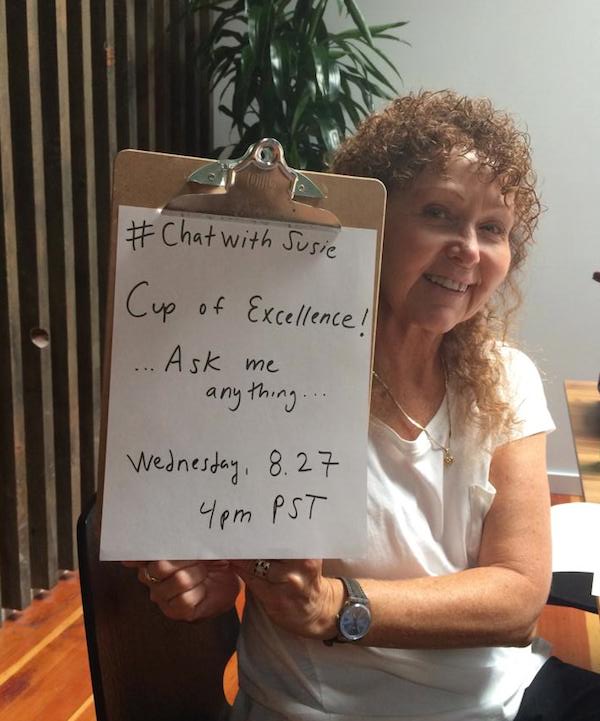 Maybe it’s from breathing the fresh Rocky Mountain air of her Missoula, Mont., home, but Susie Spindler is something of a specialty coffee pioneer.

Since co-creating the first Cup of Excellence program in 1999 — then called “Best of Brazil” — Spindler has been the heart of the program and the nonprofit group that she also co-created to oversee it in 2002, the Alliance for Coffee Excellence. Spindler is retiring as ACE executive director, giving the reins over to new Executive Director Debbie Hill, with plans to shut down the Montana office at the end of January.

It is entirely possible that the changes that have occurred in green coffee buying practices over the past decade or so — including a focus on traceability and sustainable relationships with farmers, and the general elevation of origin as a differentiating factor in high-end coffee — may not have developed as fully without the influence of ACE and the farmer-forward CoE program.

Spindler describes the many people who have been involved with ACE and CoE over the past 15 years — staff, big-name buyers, cuppers, industry consultants and organizers in producing countries — as a kind of big family united by coffee, and when we recently caught up with her, she hesitated to take too much credit for the program’s exponential growth and undeniable influence.

“This is such a huge group effort,” Spindler tells Daily Coffee News. “I just kind of sat in the middle to make sure the spokes didn’t go off the rim.”

For those not familiar with CoE, it involves organizing individual farms in a given host country to submit samples for a rigorous cupping program involving international judges. Coffees are also widely distributed to potential buyers as samples, and the program concludes with a public online auction. For some perspective, the most recent auction (Brazil Pulped Naturals) fetched high prices of more than $50 per pound and the lowest price paid for a CoE coffee was $7.30 per pound.

Those numbers are far higher than they were in the early days of the CoE program, but Spindler said the first year demonstrated great potential for success.

“This was the first internet auction where the coffees were available to everyone,” says Spindler, adding that a short list of individual private companies had organized similar organizational models for finding quality coffees, but that the concept of a global, open and transparent auction system that paid farmers directly was new. “The farmers did not think it was a great idea. They wanted to sell their coffee immediately. They didn’t want to hold it for an experimental auction.”

That attitude changed immediately after the first year’s auction, and Spindler says her personal “a-ha” moment related to the potential of the program came in Brazil in year two, in 2000.

“We were in the cupping room and there was a discussion I will never forget,” Spindler says. “One of the cuppers said, ‘I can’t believe this coffee. What country are we in?’ This person was a very well-known and experienced coffee buyer. I got to thinking, ‘If this person doesn’t know this coffee exists, how much do we know collectively? What do we, as an industry, really know about the coffees that are out there?’ That was really an ‘a-ha’ moment for me. We were missing some coffees that could set the world on fire.” 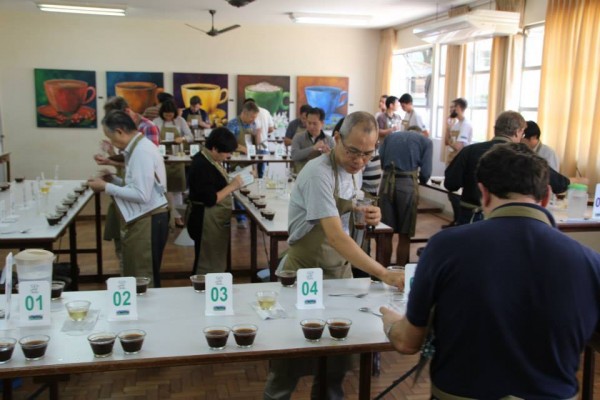 Cupping during the 100th Cup of Excellence program in Brazil. Photo courtesy of BSCA.

Adds Spindler, “I wasn’t thinking about the ripple effect of pricing and transparency.”

Those things came later, after the CoE program branched out from Brazil to Guatemala, and ACE now runs CoE programs with partners in 11 countries. The group last year opened a Portland office, added staff and most recently held its 100th auction.

“For a lot of people who are new, they think transparency and those kinds of concepts have always been here,” says Spindler. “But if you look back to where coffee was in 1999 or 2000, it’s incredible how far it has come in this one decade, compared to the previous 500 years.”

Of course, CoE’s success hinges on connecting buyers to producers, but Spindler suggests the concept of connection goes much deeper than merely cupping coffees and a public auction format.

“After talking to farmers and seeing what affect being recognized was having on them — not just through the auction — but on their pride, we knew there was something there,” Spindler says. “At that point, people were starting to go in and visit winning farms. We even saw some of the cuppers who weren’t comfortable going into producer countries because they didn’t know where to start. And we were able to organize these trips for them.”

That later developed into a formal “meet the farmer” program, something that Spindler says has provided many of her most cherished memories over the past 15 years. “I remember so many instances where a cupper would meet a farmer and say, ‘Oh my God, I can’t believe it. I bought your coffee and now I’m actually meeting you.’ Those kinds of things stick with you.”

Unfortunately, some of the ongoing challenges with bringing rare, small-lot coffees to market can also stick with you. “One of the problems the program faces is the lack of pre-financing for some of these farmers,” says Spindler. “They need that money right now. They can’t hold as little as even 10 bags, or 15 bags. They have bills they have to pay, loans they have to pay. It’s a real challenge and that’s an infrastructure issue that the entire coffee industry faces with small farmer financing.”

Asked why she’s stepping back from a program that’s been so dear to her heart, Spindler says, “As much as I bellyache and complain about the challenges of startup, I tend to be much better at those kinds of things than managing and maintaining organizations that are a certain size or age. I feel like ACE is going to be better off, even though it will be hard for me to let go.”

Aside from a few professional pursuits and consulting opportunities, Spindler says she’s going to use some of her newfound free time to reconnect with the natural beauty and wildlife of Montana. Equal to her interest in coffee is her passion for wildlife preservation — she was instrumental in creating West Yellowstone’s Grizzly & Wolf discovery Center. “If I have an opportunity to use the skills that I have to make an impact in wildlife conservation, and I can make an impact, I would be happy to apply my skills there,” says Spindler, “but I love coffee, too.”

In the meantime, she’s excited about the ongoing growth of ACE and the CoE program under Hill’s executive leadership.  “Cup of Excellence is “only to 100 [auctions],” Spindler says. “I would bet that 200 won’t look anything like 100 because there will be changes and and improvements and everything is a work in progress. But that’s the great thing about coffee: It’s a living, breathing work in progress.”

Very interesting reading. I have a couple of comments as i feel that COE is good in furthering the cause of good coffee.

My first comment is about the fact that she thinks poor farmers are entering the contest. At least in Costa Rica, where i grow my coffee, the contest is populated by well organized, well funded participants who do not hurt because they have to hold on to 15 sacks until April or June. Actually, with the way the Coffee Law of 1962 structures the market, farmers wait a lot more time to get the money from mills. Maybe COE is reaching smaller farmers with very limited resources in other countries but in Costa Rica the participants belong to a premier circle of growers and mills.

My second comment is about the serious credibility issues that COE has, at lesat in Costa Rica. COE is something that i always wanted to participate in, ever since i heard of it. Independent cuppings make me believe that i have coffee good enough to take a top place in the competition but the advise is always “dont bother”. The most interesting part of it is that it comes both from former participants as well farms and mills who have not entered because of the negative perceptions it has.

What are they? Probably the most common is that the contest has become so important that participants go at great lengths to win it, mainly with lab samples and nano lots that are not representative of the general quality of the farm. The nastier comments are directed at the partiality of the local organization running the contest and how the process is not set up to be 100% transparent and how the identity and origin of participating samples can easily be determined.

Considering the importance of COE and looking into its future, i think the change in leadership should be considered a good opportunity to assess its standing with farmers. Continued growth is essential for the contest and a simple effort to survey non-participants is a great way to measure that potential for growth. Who knows, maybe their concerns are not realistic or maybe positive change should be welcomed, either way it is important to hear what their feelings are.