Although price volatility was calmer in November, global coffee prices slipped slightly downward as widespread rains throughout Brazil have resulted in reduced estimates for next year’s crop. This according to the latest data compiled by the London-based International Coffee Organization.

The ICO’s monthly report for November shows that its composite indicator price — which includes arabica and robusta composite prices from all the world’s main growing regions — dipped to $1.621 per pound of green coffee for the month. That is a 6.2 percent decrease from October’s price, but slightly higher than September’s price. The ICO cites weather in Brazil as the most influential factor in November’s slightly downward price, saying:

According to Conab, production of Arabica in Brazil will be six million bags lower in 2014/15 compared to 2013/14; some of this deficit may be covered by the continued recovery in Colombia and improved management of coffee leaf rust in Central America, but the gap will not be totally offset. 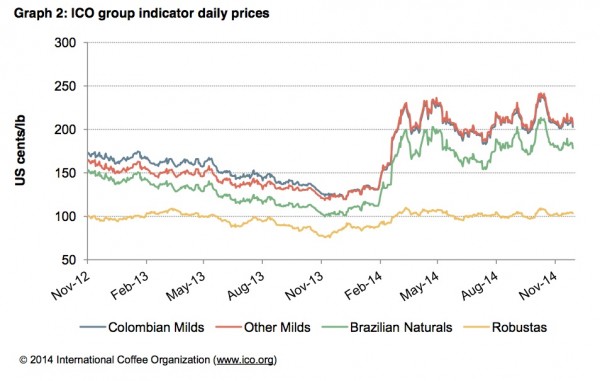 ICO group indicator prices for the past 24 months. Graph courtesy of ICO.

While total global exports are less than one percent higher than they were at this point last year, the ICO’s report also includes some illuminating import data.

“According to figures from Eurostat, net imports into the EU from January to June 2014 were 1.1 percent lower than 2013, amounting to 22.6 million bags in the six month period,” the ICO says. “This is likely a reaction to the economic situation in many European countries; however it should be noted that this data is provisional and could be subject to revision.”

Such revision could more closely reflect trends being seen in other high-consuming countries, such as the United States and Japan, where demand seems to be increasing “relatively strongly,” the ICO says: “Disappearance in the USA reached 12.2 million bags in the first two quarters of this year, up 1.8% compared to 2013. In Japan, disappearance rose by 100,000 bags to 3.8 million.”

In addition to increased demand in these traditionally high-consuming markets, demand increases are also trending upward in emerging markets, with the ICO mentioning Turkey as a market where net imports have “risen significantly.”

“Continued growth is also expected in most emerging markets in 2014, with the possible exception of Russia,” the ICO says. “Likewise, in exporting countries, full data are not yet available, but initial expectations are that demand will continue growing at a strong rate in most producing countries. Again, this will be affected by economic growth prospects.”

For additional data, including the latest production predictions for the 2014/15 crop here, here is the full report in pdf form.