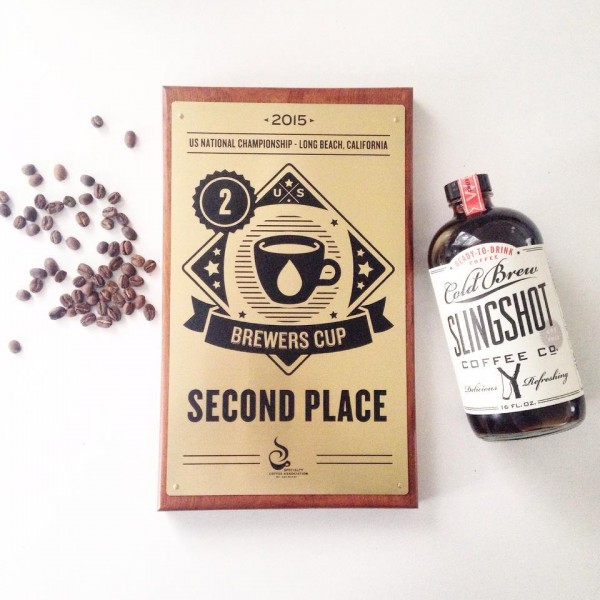 Slingshot Coffee next to Jenny Bonchak’s US Brewers Cup trophy.

A tremendous achievement for a first-time competitor — or for any competitor, really — Jenny Bonchak recently placed second in the US Brewers Cup in Long Beach, Calif., behind champion Sarah Anderson of Intelligentsia and in front of 2014 U.S. champion Todd Goldsworthy of Klatch Coffee.

This was at a time when a large percentage of her professional energy was largely focused elsewhere, in Raleigh, N.C., where her cold brew business Slingshot Coffee was in the middle of a $400,000 investment round with multiple firms.

“I’ve been busy,” Bonchak told Daily Coffee News on the heels of her Brewers Cup success.

The funding was initiated through a somewhat-chance meeting with John Replogle, the President and CEO of Seventh Generation Inc., and former President and CEO of Burt’s Bees. Replogle got a hold of Slingshot Coffee through a mutual friend of Bonchak’s, tasted the product, requested a meeting, and the two hit it off. 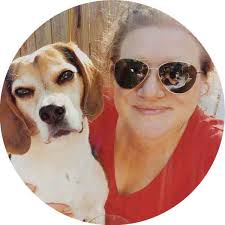 “He’s been an amazing partner to have,” says Bonchak, who has also secured investments from two separate private equity firms that she declined to name. “He believes so much in what we’re doing and he believes in the entrepreneurial spirit, It’s not just a monetary support he’s bringing, it’s a different kind of support he offers, and I’m really grateful for it.”

With the investment round nearly finalized, Bonchak says she intends to add staff and ramp up all aspects of the business, including production, sales, marketing and new product development. “Pray, tell?” we asked of the latter, but Bonchak says she is currently “not quite ready to let the cat of the bag.”

Slingshot’s core products currently include a ready-to-drink bottled cold brew, a bottled cold brew concentrate and, most recently a cascara tea. Bonchak sources her coffee from Durham-based Counter Culture, where her husband Jonathan Bonchak has worked for four years. (Both Bonchaks have now stood on the figurative Brewers Cup podium). Jenny Bonchak takes an innovative approach in the bottled cold brew segment, pushing coffee quality to the forefront. Slingshot even offers a seasonal brew, using single-origin coffees from Counter Culture.

While Slingshot’s products are now in stores in at least 11 states, its beginnings three years ago were modest. Bonchak was brewing and bottling in a small kitchen space after hours. She would go in at 11 p.m., work through the night, go to her day job, get a few brief minutes of shut-eye and do it all over again.

As production grew, the one-person operation moved into an approximately 150-square-foot space inside a Raleigh bike shop owned by friends. In June 2014, feeling further production growth Bonchak moved yet again, into a 1,000-square-foot dedicated space.

“We were very picky about where we wanted to be,” Bonchak says of Slingshot’s current home. “We wanted to be somewhere near the neighborhood where I lived. I want the business to continue to be part of a community.” 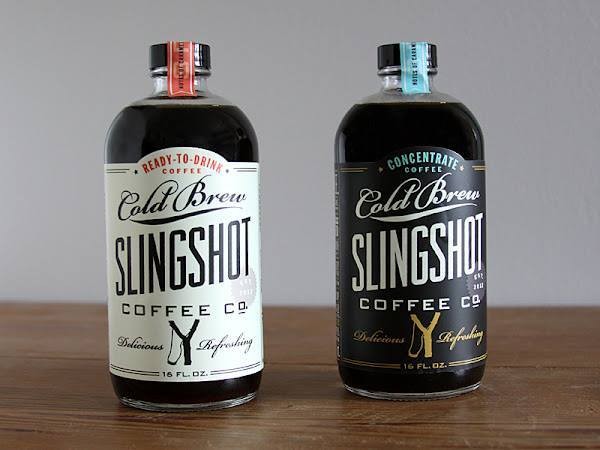 Slingshot also opened a limited-hours retail component, called Weekend, with outdoor seating, tapped cold brews and hot coffee pourovers. Slingshot’s pattern thus far has been step-by-step growth in fairly rapid succession, and Bonchak says the company may yet outgrow its existing space, although she’d like to stay there for as long as possible and further develop the Weekend component this Spring.

“I have always had a lot of faith in what this is — making a really good product,” says Bonchak. “I’ve certainly had ideas about ‘I would love to be at X sort of place by X sort of time,’ but there is a lot more focus just on doing what is really good, and on being calculated about how we’re growing as a brand.”