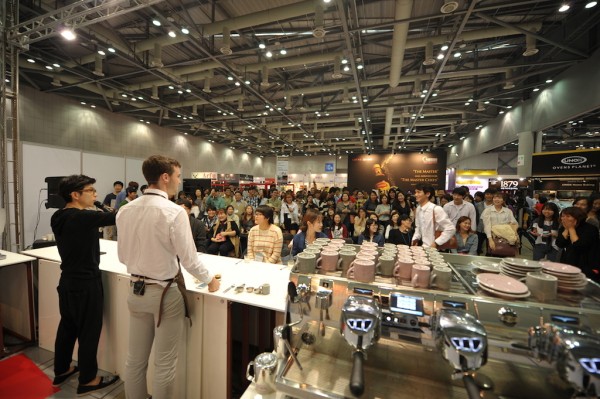 Matt Perger in front of a Victoria Arduino Black Eagle espresso machine at the WCE All Stars event in Seoul in 2014. Photo courtesy of WCE.

Major changes are coming to the World Barista Championship format beginning in 2016, including a single grinder limitation, a new espresso machine model and a new “milk drink course” that replaces the 15-year-old “cappuccino” component. World Coffee Events, the Dublin-based group that produces the WBC, says it plans to announce two additional big changes for next year’s competition during the upcoming world championship in Seattle.

“While we’ve made small changes to the competition format over the years (remember the mandated sugar bowls?), it’s time we introduced more changes — bigger changes,” the group announced today, adding, “changes that bring the focus of the competition back to its innovative roots.”

The equipment changes involve partnerships with Victoria Arduino, which will provide its “Black Eagle” espresso machine, and Mahlkönig, which will provide K30 Vario grinders. The decision to disallow competitors to bring their own grinders for competition use reflects what WCE describes as “an effort to level the playing field and bring the focus of the competition back to its original ethos.”

“WCE recognizes that many competitors — as well as the team of people supporting them — incur a large cost in preparing for the competition in time, energy, and competition supplies,” the WCE announced. “With 50+ sanctioned national bodies spanning the globe, WCE also recognizes that not all competitors have the same resources at their disposal.”

As part of the sponsorship deal, Mahlkönig will be providing some 30 grinders for the WBC, as well as “supporting” national competitions leading up to the WBC, which next year takes place in Dublin.

This year’s WBC in Seattle will also be the swan song of the competition’s cappuccino, which is being replaced by the more broadly defined “milk drink.”

“As new specialty coffee culture emerges, and social media and the internet make the world smaller, we now know that there is more than one way to serve incredible milk and coffee drinks,” WCE announced.

“The changes we’re announcing represent exciting steps towards a new WBC,” Stephen
Morrissey, chair of the WBC Competition Working Group and 2008 World Barista Champion said. “Our community has always been highly invested in the future of the competition, so we want to be entirely transparent about why these changes are being made.”

Why won’t they integrate the World Aeropress Championship into the WBC?