The Duo Coffee Steeper: Immersion Brewing with a Twist 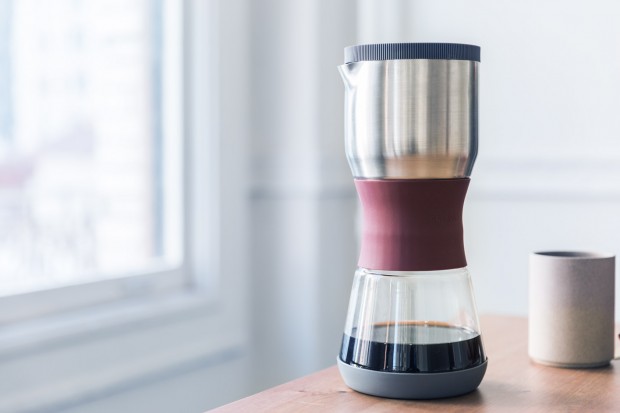 San Francisco startup Fellow Products is currently shipping its inaugural product, the Duo Coffee Steeper, to backers of its early-2014 Kickstarter campaign, with the wider product release scheduled for July.

Offering a fresh take on the immersion brewing/passive filtration method of home coffee preparation that combines the steeping technique of a French Press with the gravity-filtered process of a manual pourover, the Duo’s resulting cup is ostensibly akin to that of a Clever Coffee Dripper or Bonavita Immersion Dripper. Added to the equation are its pleasing aesthetics, robust materials, and all-in-one design, which make it easy to see how the Duo project roped in more than $193,000, nearly four times its Kickstarter funding goal.

Operation is straightforward, with a food-grade stainless steel chamber to hold coffee and water at the top of the device and a silicon lid to trap the heat. A slight twisting action opens a drain at the base of the chamber for coffee to pass through a two-stage, stainless-steel filtration process, down into the included heat-resistant glass carafe. A silicon collar at the center of the hourglass-shaped device makes for easy handling, and the filters are easily removed for cleaning. Large enough to brew up to four servings at once, the Duo is designed to be equally capable of overnight cold brewing, as well as to withstand the shock of hot brew over ice inside the carafe for Japanese-style iced coffee. 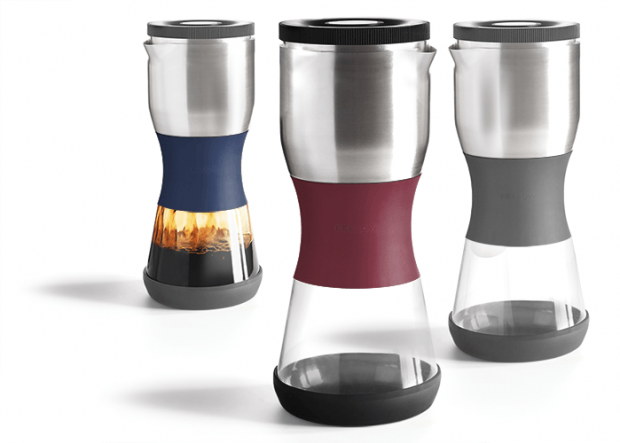 As impressive as the product’s design is the deft execution of its Kickstarter campaign. With cogent explanations and a humorous production sensibility, Fellow Products presented its innovation to the public and reaped a well-deserved financial boost. As a result, the Duo Coffee Steeper is currently being delivered to backers precisely on the schedule promised 18 months ago.

At the time of the campaign’s launch, the team behind the Duo went by the name of Enormous Industries. Brand Manager Hanna McPhee explained to Daily Coffee News that the name was an affectionate nod to the physical stature and personality of company founder Jake Miller’s grandfather.

“After Kickstarter, as we transitioned from crowd-funded campaign to startup, we started to explore branding options,” wrote McPhee. “Although the initial reason for choosing Enormous Industries was incredibly endearing, it soon became clear that Enormous Industries was being used for an entirely different purpose in the adult industry. Hah.”

Apart from the sensible desire to avoid public confusion, McPhee also explained that as the Fellow Products’ portfolio expands in the years to come, a stronger name that could envelope a broad range of products was in order. They wanted something that would also maintain the warmth and playfulness of the brand they presented in their Kickstarter materials. Said McPhee, “Fellow stuck because it conveyed our mission to be a friend in the pursuit of great coffee and design.”

Pre-orders for the Duo Coffee Steeper are open to the public at the company’s website for delivery in July at the discounted price of $85, which goes up to $95 thereafter. An optional tea infuser insert is also available for pre-order. Fellow Products’ own double-walled white ceramic “Joey Mugs,” featuring unique and attractive brushed copper bottoms, are available for pre-order and will ship in mid-October. Wholesale prices are available, as well.

Device of the week. As if we don’t have enough.

Duo Steeper is a beta product. Purchased it and return upon opening the package. Don’t waste your time, you end up eatng shipping cost.