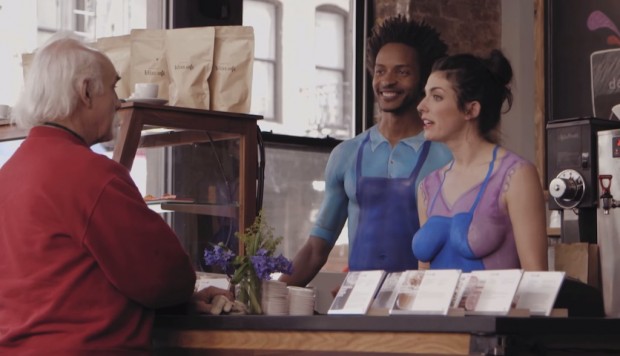 Back in April, international food giant Nestlé rented out the Lower East Side Manhattan location of Irving Farm Coffee Roasters, created a popup shop called All Natural Bliss Café and filled it with a bunch of mostly naked models and actors as baristas.

The popup, opened in collaboration with New York creative agency 360i, was part of a larger marketing plan to push Nestlé’s new line of Coffeemate creamers called Natural Bliss. The creamer line purports to only have four ingredients, which still seems like a lot for cream: milk, cream, sugar and natural flavor.

While the dots aren’t hard to connect here — people in their au naturel state, save for some strategically placed covers and body paint, are promoting the new natural-themed product — but it does bring up a lot of questions:

As you can see by the confounded looks of the unsuspecting coffee shop patrons in Nestlé’s resulting promotional video, these aren’t the only questions:

This is shocking. I wouldn’t want my man in there! I mean this could be an attraction but it could also be a hindrance to stop by for some coffee.

Interesting way to promote. Gets you thinking about that so I guess they achieved their goal