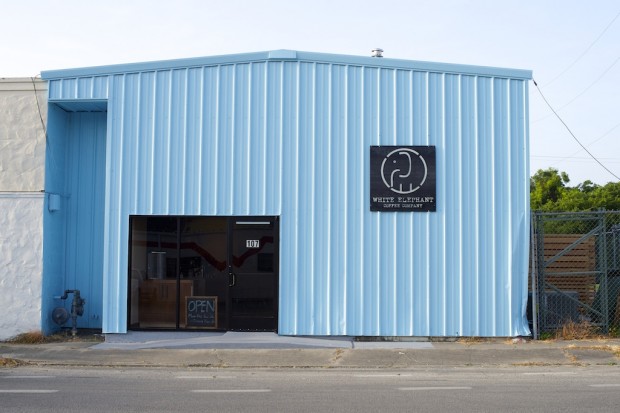 It has been nearly a year since Jose Carlos de la Colina first set up his roasting shop in the heart of San Antonio’s Southtown under the name White Elephant Coffee Co. At the time, de la Colina told us he envisioned a front-of-house coffee bar with a Slayer Espresso centerpiece.

True to his word, although a few months later than he initially anticipated, de la Colina’s White Elephant team has unwrapped its lovely new retail bar, occupying some 1,000 square feet with open views into the 300-square-foot production roastery. A Bocote wood-paneled Slayer machine is accompanied by a Hario copper V60 pourover station, an Aeropress stand, a cold brew station with two large Yama towers, a Curtis Gold Cup Gemeni for batch brews, and a trio of Mahlkönig grinders.

In addition to menu of traditional espresso drinks and brewed coffees, While Elephant is offering a fresh take on a Café de Olla, the Mexican coffee drink prepared in an olla pot with cinnamon, brown cane sugar and sometimes other spices. De la Colina recently told Daily Coffee News that they have discovered a method to brew the drink fresh at the bar that involves a unique twist in extraction, one that remains under wraps. 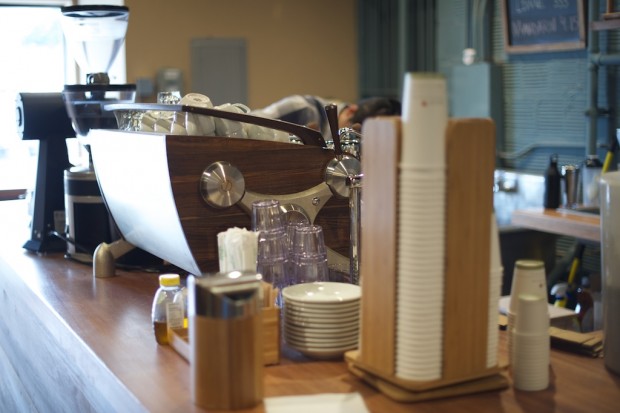 De la Colina said the cafe’s interior plan tries to create immediate visible connections to new patrons to both roasting and brewing, with the aforementioned Slayer centerpiece, a black Probat P-12 lit from above and cornered off by two large windows, views of green coffee storage, and manual brewing gear that emphasizes the shop’s scientific approach to coffee brewing.

“The feel we were going for was a comfortable roastery-warehouse space where coffee is enjoyed fresh,” de la Colina said. “We tried to stay away from a completely refined look in order to escape feelings of intimidation on behalf of the customer.”