Chew on This: Fat Taste Is a Real Thing in Coffee and Other Edibles 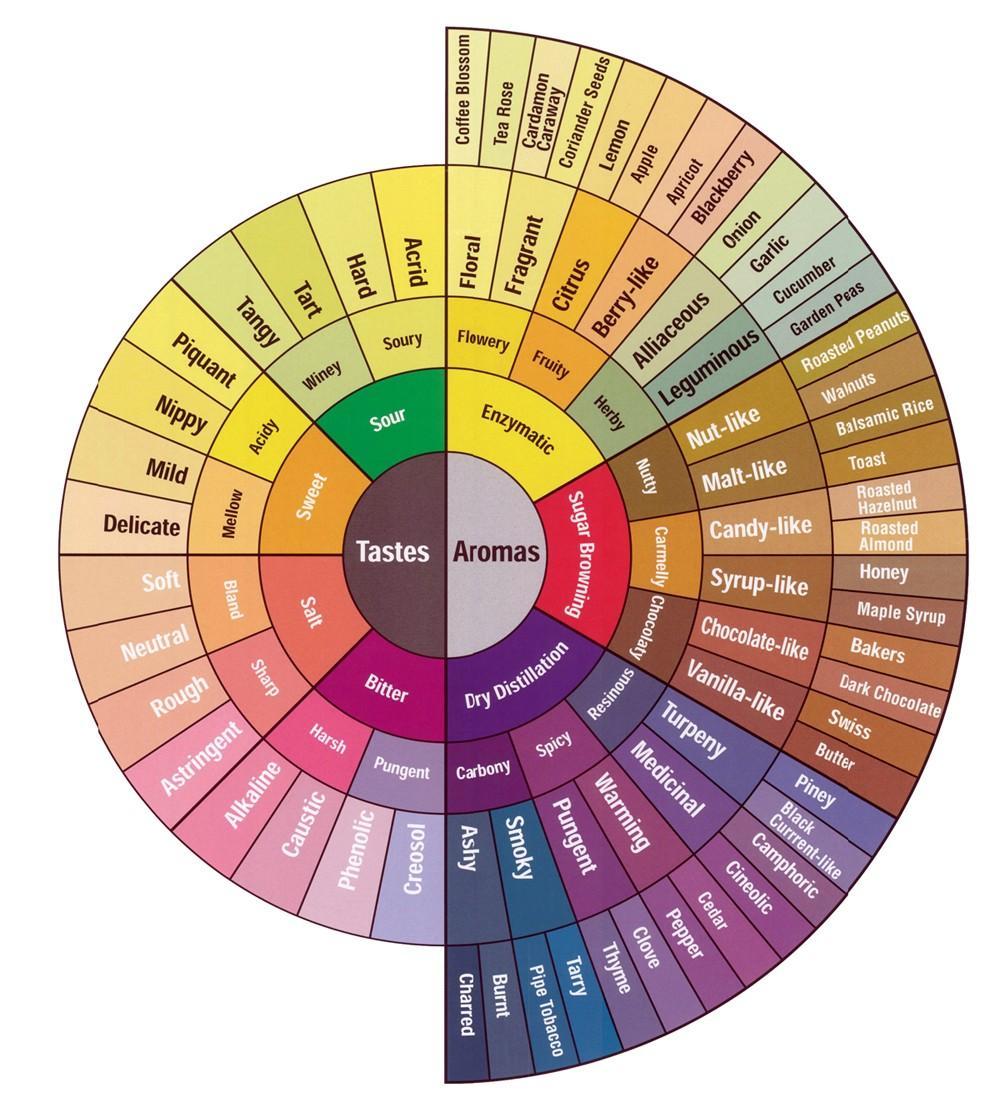 The SCAA Coffee Taster’s Flavor Wheel. Might a revised edition include “fat” or “fatty?”

Researchers at Purdue University say they have found evidence to support fat as a sixth basic taste, in addition to sweet, sour, salty, bitter and umami.

Scientists have argued for the taste of fat, which the Purdue team refers to as oleogustus, as an appropriate addition to the primary list of tastes for years. However, the most recent research suggests it has been held back by the scientific sensory analysis community at large because it has historically been associated with mouthfeel — viscous, velvety, heavy, etc. — rather than flavor. In coffee terms, fat taste is most likely to be associated with defect descriptors such as rancid or rotten.

In a report published last month in the journal Chemical Senses, the researchers argued that a large percentage of the 102 taste test subjects were indeed able to identify fat as a distinct taste, even if they didn’t have a common name for it. They suggested fatty taste was most often confused with bitter or umami, but that may reflect misunderstandings of those tastes rather than a nonexistence of fat taste: Here’s more from Purdue:

Because there are no familiar words to ask people to use to describe the taste of fat, the 102 study participants were given multiple cups of solutions each containing a compound that tastes salty, sweet, umami, bitter, sour or fatty. The participants were asked to sort the solutions into groups based on which had similar taste qualities. Odor, texture and appearance were all controlled.

The panelists easily segregated sweet, salty and sour samples confirming they understood the task. Initially, the fatty samples were grouped with bitter because bitter is the vernacular descriptor for unpleasant taste sensations. However, when asked to sort samples including bitter, umami and fatty stimuli, panelists grouped the fatty acids together and separately from the other samples…

This resembles an assertion made by coffee industry veteran Ted Lingle, who created the SCAA Coffee Tasters Flavor Wheel, in a 2012 Roast magazine story written by Equal Exchange Coffee Quality Manager Beth Ann Caspersen. At the time, Lingle suggested that umami — which is not represented directly on the wheel — should really be a subset of the flavor salt, with the underlying subtext being that perhaps fat is a flavor all its own. Here’s more from that 2012 story titled “A Well-Rounded Palate:”

After attending the Applied Sensory and Consumer Science Certificate Program at the University of California, Davis, I was certain that the basics of flavors were not fairly represented on the flavor wheel. For one, an important discovery made about the way food products can taste, dubbed “umami,” was not being represented. I wondered if there were plans to include this fifth taste in a future version of the flavor wheel. However, Lingle has an opposing opinion about umami. He asserts that the flavor of umami is a modulated version of salt introducing fat — basically a merger of salt with water-soluble oil, much like the flavor of seaweed and widely known as monosodium glutamate (MSG). Therefore, he says, it is a subset of salt on the Coffee Taster’s Flavor Wheel.

The Purdue research suggests fat and umami ought to exist as distinctly from one another as do sweet, salty, bitter and sour.

“The taste component of fat is often described as bitter or sour because it is unpleasant, but new evidence reveals fatty acids evoke a unique sensation satisfying another element of the criteria for what constitutes a basic taste,” said study author Richard D. Mattes. “By building a lexicon around fat and understanding its identity as a taste, it could help the food industry develop better tasting products.”