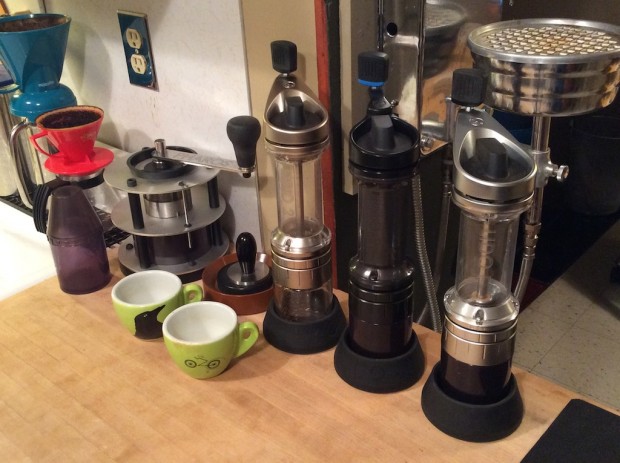 The complete evolutionary line of Orphan Espresso hand grinders at the Garotts’ home workshop in Idaho.

Manual grinders are almost inherently consumer-oriented items. Far too slow and laborious to be practical in commercial settings, one can still earn a place in the travel kit of a coffee professional if it performs up to professional standards.

A truly portable, well built, accessibly-priced and espresso-capable hand grinder has scarcely existed to this point, although this hasn’t been too terrible a hardship as neither has a correspondingly ideal on-the-go solution for espresso brewing. However, with the advent of such devices as the EspressoForge, baristas, roasters, shop-owners and aficionados alike can now pull a refined shot virtually anywhere — that is, if their grinder is up to the challenge.

With the Lido E, it would appear that the folks at Orphan Espresso might just have cracked the code. Their latest offering features extremely precise Swiss-made steel conical burrs, finely pitched adjustment collar threads, an ergonomic handle, generous hopper, anti-static catch jar and a dependable, alignment-stabilizing bearing system. Weighing in at about one kilo, it’s not the lightest hand-grinder around, though it sounds likely to pack the most exacting of third-wave standards into a carry-on suitcase or backpack.

From Pharos to Lido

And just like a direct-trade single origin coffee, the grinder has a story. The story is that of its creators, Doug and Barb Garrott, lifelong tinkerers from northern Idaho with something of a cult following in home espresso circles, particularly in the manual lever home espresso niche. The name harkens back to the company’s era of origin, when the primary focus was on providing support and resources for the repair and maintenance of vintage, obsolete espresso machines.

In 2011 OE came out with the Pharos, a solid workhorse manual grinder of their own design, housing “titan” class 68-millimeter conical burrs and an unadorned yet vaguely steampunk appearance. Though not the most portable or easiest to crank, the quality of the Pharos grind is considered on par with large professional electric grinders that are orders of magnitude pricier.

After years of slow, steady growth behind the Pharos, OE expanded the line to include a smaller, lighter hand grinder called the Lido. “The Lido 1 was a precision grinder that you could take with you,” Doug Garrott recently told Daily Coffee News. “We called it a cupping grinder.” Consumer response was generally favorable, although there were those that took issue with the Lido’s plastic components and its slow grinding time. So began the evolution of the Lido line, which was a very intentional process from the start.

The aim with the Lido 2 was to be both faster and made of tougher materials, although the Garrotts knew right off the bat that “faster” would mean a more aggressive burr that’s harder to turn, and that “not plastic” would mean “heavy.” Knowing this, they made it anyway, and the hefty, hungry Lido 2 was nevertheless a hit. Their booth at the 2014 SCAA Event had a consistent flow of attention, while media recognition for their achievement was the most visible splash to date, including articles in Fast Company, Gizmodo and elsewhere.

“Grinding for espresso on the Italmill burr, it’s hard work,” admitted Garrott about the Lido 2’s original build, which has since been upgraded to Swiss-made burrs. “When we’d go to a show and people wanted to see espresso on that Italmill burr, we’d just grit our teeth and we’d do it, but we tried to promote what a great brew grinder it is.”

It had the speed and the build that people seemed to demand, but it still wasn’t perfect. “The consumer response was that it’s too hard to turn, and it’s heavy. Well, we did that on purpose,” said Garrott. “Part of the reason why we made the Lido 2 heavy is because we knew from the get-go we were going to make a travel grinder, and it was going to be lighter.”

The travel grinder is the Lido 3, which reached the public in the spring of 2015. “The Lido 3 is still one kilogram,” said Garrott, with a glint of mischief to his tone. “In the greater scheme of things, it’s still kind of heavy. But compared to the Lido 2, it’s light. The way we could make a 1-kilogram grinder light was to make the other one heavy.”

The Lido 3 featured lighter materials, a more ergonomic handle, an improved funnel-top for loading beans, and other details. But what really set it apart was the burr set. The Lido 2 originally contained Italmill burrs that worked well for anything but espresso, yet also suffered from some unpredictable manufacturing tolerances. “The secret that nobody talks about is that all of these machines are just the sum of their tolerances, whether it’s the HG One or a Mazzer,” said Garrott.

It was a recommendation from Baratza’s Co-Founder and Chief Engineer Kyle Anderson that turned the tide. For love of a good manufacturing adventure, Anderson has served as a sort of mentor for the Garrotts, gaining them access to the same factory in Taiwan that produces Baratza electric grinders. Anderson also introduced the Garrotts to the Swiss burr manufacturer by the name of Christian Etzinger, who had developed a fine set of burrs for use in Baratza’s Preciso grinders. Etzinger then engineered a burr set of such outstanding quality, it was almost too precise.

Talk to Doug Garrott about burrs, tolerances, and alignment, and he’ll likely tell you about Zeno’s Paradox of the Tortoise and Achilles, the Greek mythological parable. “I have driven people crazy in Taiwan over this,” Garrott said. The moral of the story is essentially that the closer one comes to achieving perfection, the more elusive perfection suddenly becomes.

After years of struggling with the random variances in the Italian-made burrs of the Lido 2, accommodations had been made that Etzinger’s impossibly precise burrs didn’t need. Tiny flaws thereby became glaring, which proved to be a good thing, leading the Garrotts to readdress and tighten the design from top to bottom. With Etzinger’s burrs, the Lido 3 was easier to assemble and more straightforward to align, which not only meant less time and material wasted in the Lido manufacturing process but also a more consistent grinder in the hands of the end-user.

Etzinger’s burrs brought the Lido to a new level. “This opened to the door for two things. One was that it was easier to turn for espresso,” said Garrott. “The second thing was, the precision of the burr actually just makes the whole thing better.”

The Lido E represents the final stage of evolution in Orphan Espresso’s ideal manual espresso grinder. For the E, the grinder-makers tightened the adjustment collar thread pitch in half, going from the 2-millimeter pitch of previous Lidos down to a 1-millimeter pitch. With its mason-jar-like diameter, the difference translates to a fine-grind adjustability range that’s four or five times more precise. An additional bearing adds precision to the alignment system, and a new included accessory called the ConeTop screws onto the top of the catch jar for easy dosing into a portafilter basket. 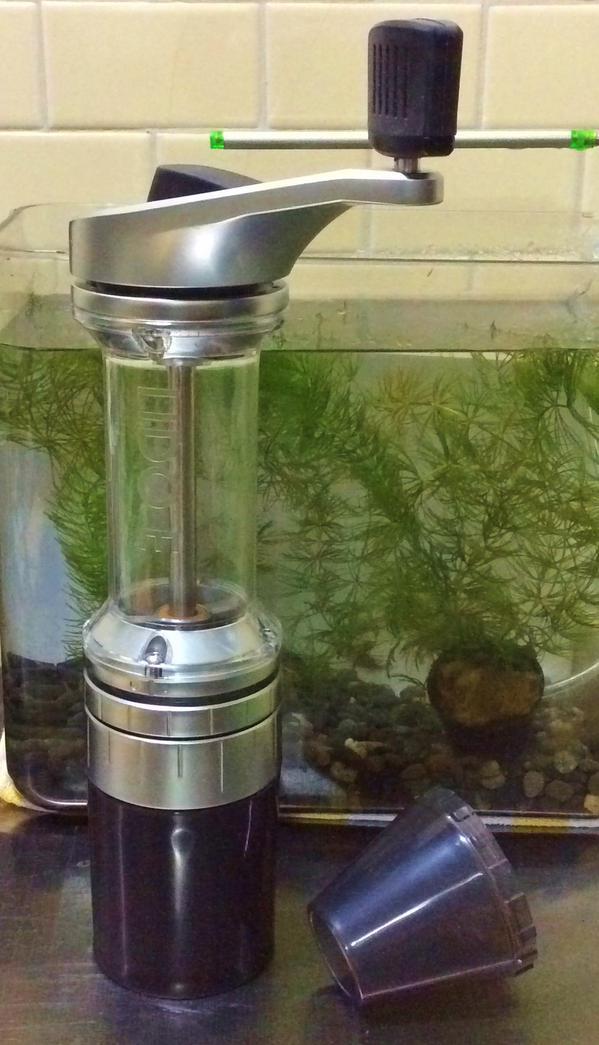 Currently, the Lido E has only just started to ship. Units are in stock in the US and the UK. Team OE — or, the Orphans, as fans sometimes call them — will appear at the HOST Milano trade show in Milan in late October, between stints in Taiwan overseeing manufacturing.

Beyond that, the Garrotts may take a break from grinder-making to pursue other commercial projects, such as hard-shelled travel cases for their products, and OE product bundles. They may endeavor to import and distribute the Kono, a classic Japanese pourover cone that Doug Garrott is particularly enamored of that predates the Hario V60. There also simmers a back-burner inkling to reinvent the wall-mounted manual grinder — these are professional tinkerers, after all.

In the video below, posted recently by Orphan Espresso, the full line of OE hand-grinders is visible on the counter of a masterfully bearded Doug Garrott’s home coffee workshop. Garrott said he hasn’t used an electric grinder in years, as he and Barb are committed to actually using all of their own products as much as possible. Below you’ll see the Lido E in action, preparing a shot pulled on a fascinating and beautifully restored wall-mounted vintage Faema spring-lever espresso machine.