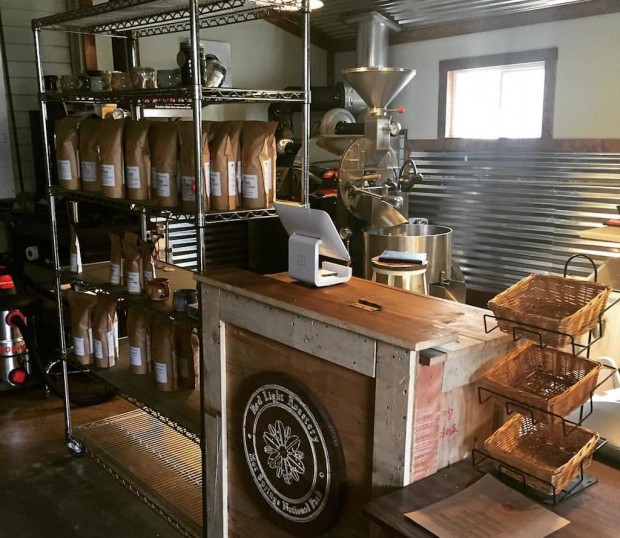 Recently we reported on the Arkansas-based coffee company Coffee.Org that acquired the internet domain CoffeeRoaster.com, with the possible intent of compiling a nationwide directory of independent roasteries. If that list starts local and works its way out, a likely candidate for early inclusion would be Red Light Roastery, a fellow Arkansas roaster that just got rolling over the summer of 2015.

Red Light is the enterprise of roaster and owner Adam Moore, whose wife served him a life-changing cup of Guatemalan coffee in late 2014, with notes of berries and chocolate that sent him down the rabbit hole of research, tasting, and all-out coffee geekery. It came to a head a few months later upon the arrival of the 1-kilo North roaster he ordered from Mill City Roasters, which marked the beginning of the Red Light Roastery. “I’m on a budget, and I needed something durable. I was thinking that a 1-kilo would hold me over for a year or so,” Moore told Daily Coffee News. “As soon as I started roasting, and there’s not another roastery in Hot Springs, it just kind of blew up.”

Demand rapidly outpaced his ability to roast on the small machine, and Moore quickly realized something bigger was in order. Since the building that houses his production space doesn’t have the electrical infrastructure to support the 20-kilo-capacity model, he went with the 10-kilo North roaster, and he’s glad he did. 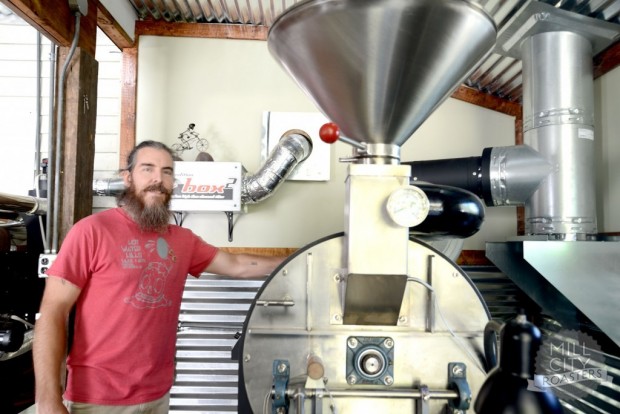 “It’s a good solid machine just like the 1-kilo was,” said Moore of the machine that was delivered in three heavy crates and is now installed in an approximate 450-square-foot space in a garage Moore modified for the business, situated by the house the Moores are renovating, which happens to be three doors down from former President Bill Clinton’s childhood home. “That’s kind of a fun fact,” said Moore.

Moore estimates that the city of Hot Springs has a population of about 35,000 people, but with the surrounding county it feels bigger. Though it has quieted down since its heyday as a gambling and entertainment hub in generations past, the advent of Red Light and a couple new breweries in the area signal the beginnings of a cultural resurgence. Moore plans to add a tasting room to his roasting establishment, although nothing as elaborate as a full on café.

“We’re trying to partner with a couple of the coffee shops in town,” said Moore, who would prefer to build more wholesale business than go into retail himself. “I don’t want to be competitors to them. I’d rather just have a tasting room where people can figure out what they want to buy and take home.”

Red Light has so far offered one bourbon barrel conditioned coffee using a barrel from an upstarting distillery that’s a little less than official, so the source of that barrel must remain under wraps. For its next barrel conditioned product, though, Moore will load choice greens into either a whiskey or a rum barrel from Rock Town Distillery, founded in 2010 in downtown Little Rock.

Green coffees come by way of the Minneapolis-based importer Café Imports, and sales of the roasted product have enjoyed a strong opening period both online and locally, to individuals and to a few nearby stores. Passionate about supporting his local community, Moore directs portions of his proceeds to projects and organizations in and around his hometown. “We’re not trying to save the world right now. We’re starting in our neighborhood,” said Moore, whose efforts have so far supported work on a local park near his home, which will eventually include a playground, splash-pad and small amphitheater for live music performances. 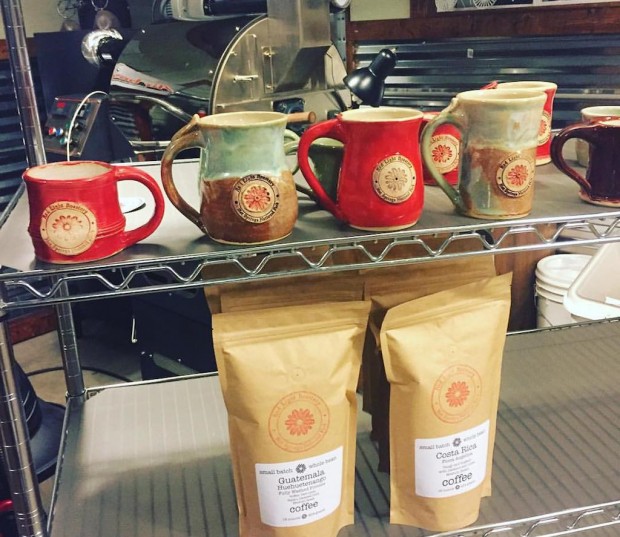 Moore is also very pleased with the supportive community of professionals of which he now finds himself a part. “I’ve found the coffee industry to be a very inclusive group of people. I’ve had other roasters calling me and saying ‘hey lets trade some beans and see what each other’s doing,'” said Moore. “It’s very unique to not be so competitive.”

On an RV trip in early 2015, Moore’s father happened to stop into the Big Bend Coffee Roasting company in Marfa, Texas, not far from Big Bend National Park, and wound up having a conversation about his son’s coffee start-up in Arkansas. The chat included an invitation for the younger Moore to come down and learn about roasting, which he did. “I actually went down there and spent five days at their roastery and hung out and roasted beans on a 25-kilo machine,” said Moore. “That’s when I realized I want to do this. I want to do this bigger.”

Moore set a goal back in July to roast 100 pounds per week, a number he surpassed by November, just before the wallop of holiday orders. As things even out with the start of 2016, Moore’s new goals are to take it slow and deliberate, fostering growth that’s purposeful and organic. “I really want to pick and choose where I go, I don’t want to get into Kroger and all these places and just have to sit here and roast all day long just to stock the shelves,” said Moore. “I want to get into these small places that have a story, [places] I’d like to share my story with.”