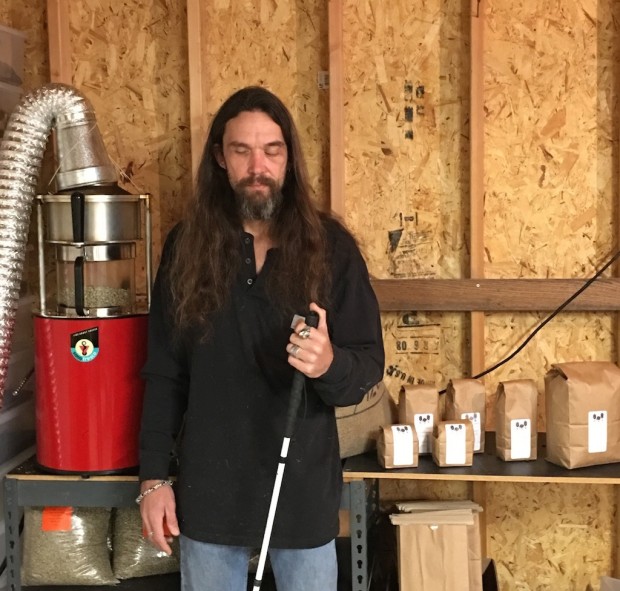 Any basic overview of the coffee roasting process will touch upon how it involves several senses working in tandem. The sight, the sound and the smell of the beans all change as a roast proceeds, indicating developments that affect how the coffee will taste when it’s all said and done. Even where some automation is involved in production roasting, a roastmaster typically first depends on visual, aural and olfactory data to establish the desired profile before going forward. But what if one of these senses isn’t available?

Where there’s a will, there’s a way, and in the case of Shaakwave Coffee, it’s Michael Shaak’s way. “I was born with a bunch of defects,” Shaak (pronounced “shock”) told Daily Coffee News. Among these, said Shaak, were a cleft palate, twisted legs, an irregular heartbeat and a severe retinal astigmatism. Surgeries and corrective treatments took care of his legs and cleft palate while medication kept his ticker on track, but by adulthood his retinas had degraded to a point where a new round surgery was required. That procedure, however, resulted in an infection that lead to his right eye being removed and his vision lost completely.

This was about eight years ago. Shaak’s left eye continues to cause him some pain, but he’s not about to go back under the knife given that it didn’t work out so well the first time. “I had a great life going, I was doing a lot of fun things, I was enjoying my thirties,” said Shaak. “That was all snatched rather quickly from me.”

Yet he wasn’t about to call it a day, either. “I lost my sight eight years ago, so a lot of it’s just rethinking it, and trying to implement things that I already know, in a different way,” said Shaak. For example, he said, “I drove a car. I actually drove a car when I was blind, in a drag strip. I used to drag race, and I had to figure out a way to do that without my sight.

“I had a guide to get me down the track the first time, and then the second time, I said ‘let me do it myself, and let’s see how it goes.'” That went well enough, and it was also around that time that Shaak went to a grocery store and brought home some coffee that tasted so burnt and so bitter that he was sure he could do a better job himself. 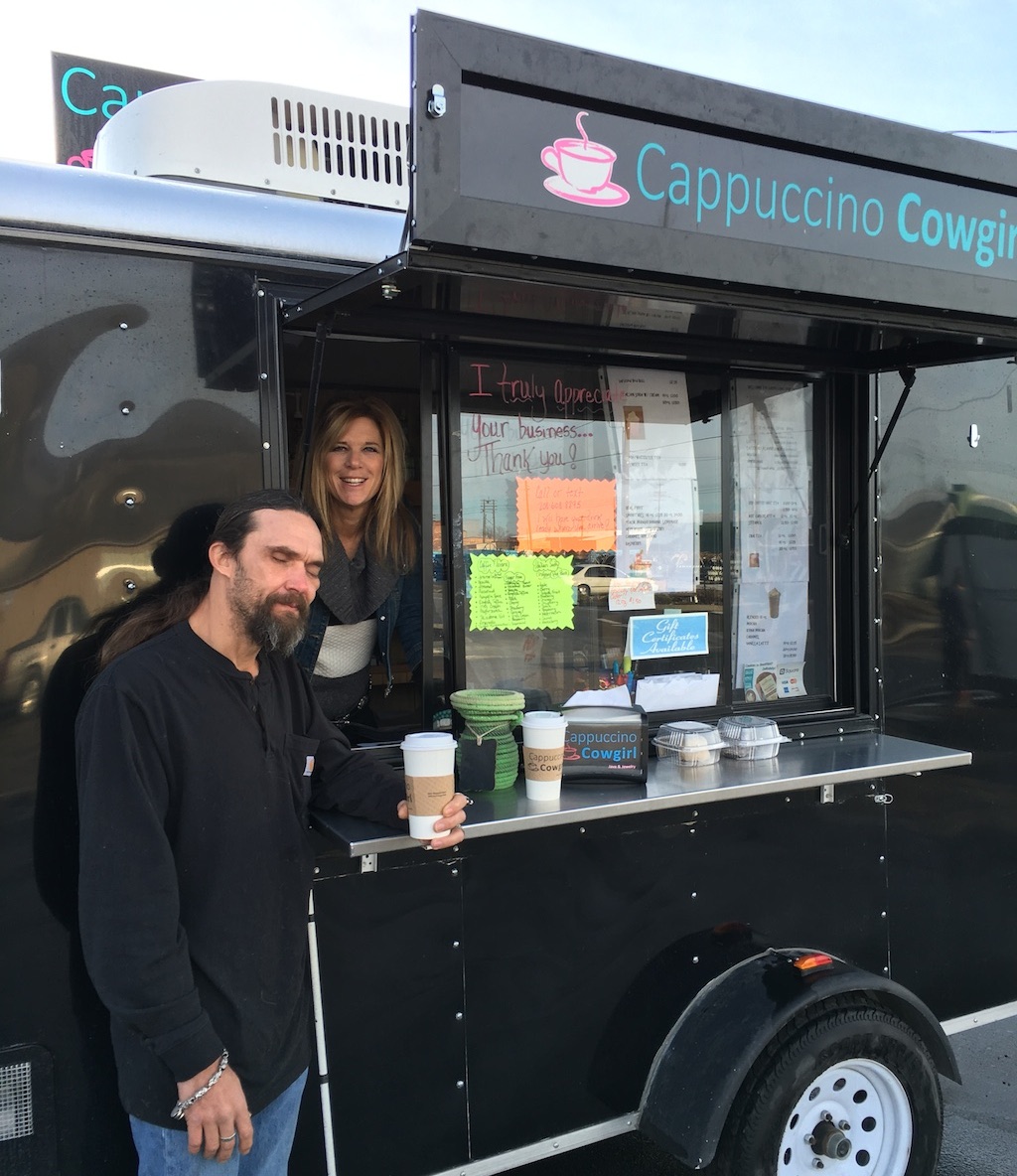 For some coffee-lovers, it’s an amazingly delicious cup of coffee that sends them down the rabbit hole, but for Shaak, it was a barely-drinkable cup of sludge that ignited in him his pursuit of the best. He started roasting his own coffee on a cast iron skillet over an open flame, which is of course a hazardous endeavor even for people with 20/20 vision. “I burned myself a lot,” said Shaak. “I was trying to smell the beans and I would get too close, so I would burn my nose, I would singe my moustache or my hair.”

He later graduated to roasting on a grill with a rotisserie basket on a spit, which was an improvement in capacity, if not in safety. “I misjudged where the spit rod was, and it ended up falling down and landing on my leg,” said Shaak, estimating in hindsight that the rod must have been about 800 degrees. “It’s kind of funny because I’ll wear shorts sometimes in the summer when I’m at the market, and people are like ‘what happened to your leg, man?’ And I’ll say ‘well, because of this coffee thing, I have this scar now.'”

It was a learning experience, and once again, not one that slowed him down. Shaak roasted at least 40 pounds per week, one pound at a time in that rotisserie basket, in order to maintain a stand at the Nampa Farmers’ Market in Nampa, Ida. “I roasted that way for at least six months in order to afford my Sonofresco,” said Shaak. “That was a beautiful thing. It shows me the sacrifice I was willing to make, to make this work.”

Shaak also packages and labels his products himself, applying the logo featuring the California Raisin-reminiscent “three blind beans” conceived by Shaak and drawn by his girlfriend’s daughter to include sunglasses and sneakers just like the ones he personally wears. Shaak’s girlfriend Susie Patterson helps with filling the occasional larger order and assists with other points now and then, but for as long as the load is manageable by one person, Shaak takes pride in being that person.

Shaakwave Coffee acquired its Sonofresco 2-pound fluid-bed roaster in October 2014, which was an enormous relief. It improved all at once the quality, safety, convenience, efficiency and volume of production. Today, the Caldwell, Ida.-based company maintains its presence at the Nampa market as well as a few stores in the Nampa/Caldwell area outside Boise. Shaak estimates about 75 percent of his business is through custom orders, where customers describe their preferences and Shaak roasts specifically to meet their needs.

As for a brick-and-mortar retail presence, Shaakwave Coffee has already been down that road, and it too proved bumpy. In early 2015, a Shaakwave shop opened on Overland Road in Boise. The public-facing component seemed like an important step at the time, and of course once he’d set his mind to it, there was no stopping Mike Shaak from achieving his goal. It got a fair amount of attention right off the bat, although not all of that attention was positive.

Shaak reportedly met some resistance from Boise city officials that were skeptical of the idea of a blind man running such a business. “It was a bunch of crap,” said Shaak. “I overcame that. I actually talked to the mayor about it, and I said, ‘You need to train your employees to understand that just because I’m blind, doesn’t mean I’m stupid.'” Ultimately the mayor agreed and the shop proceeded without issue, but the stress of it all took a toll.

“I pulled it off, I opened the shop, I was getting successful. I was making the sales, but I was sacrificing my heath and my wellbeing for that,” said Shaak. By the end of March, that heart arrhythmia with which he was born started causing problems anew, and so he went to the hospital to have it checked out and receive medication. They told him it was a good thing he’d come as he would have been at risk of having a stroke at that point. “So I said, great, I dodged a bullet,” said Shaak — and then the very next day he had a stroke.

“Luckily, it was very mild,” said Shaak, who recovered quickly and continued on with his work, but it was a wake-up call, for sure. Shaak recognized that he was forcing the shop, when it actually wasn’t essential to the success of his roasting business. He’d proven that he could do it, so his work was done in that regard, though in the long run it certainly wasn’t worth the expense of his longevity. 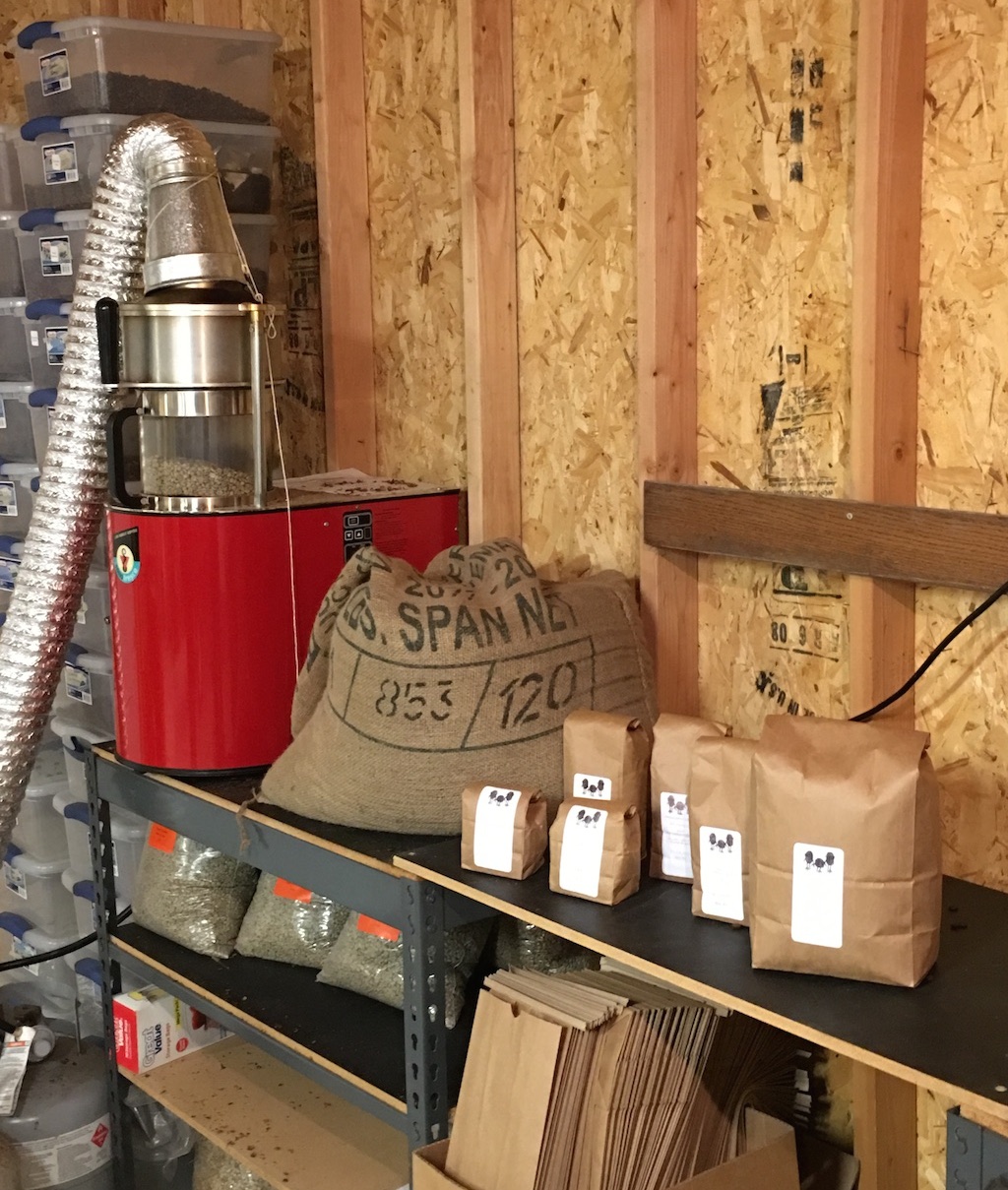 With the shop now closed, Shaak’s efforts have returned in full swing behind his custom roasting for individuals, stores and cafes. “The shop was just, ‘ok come and get a damn foofy drink and here you go,’ where roasting is more of a personal thing,” said Shaak. “I know that I put a lot of thought and love into what I do. I’m not just a guy who roasts coffee, I’m one of those that guys that if you ask me why my coffee is different, I’ll tell you why.”

Going forward, Shaak intends to simply continue growing his business and to help and inspire as many people as he can along the way. “My ultimate end goal is hire other people like myself,” said Shaak. “To buy as many of these Sonofrescos as I need, and to put people that are disadvantaged to work, and show them that it can be done.”

So excited to see not only an Idaho roaster, but a roaster from Nampa (where I live), featured on DCN!