Two Hands Coffee in Austin Gives Farmers a Leg Up When the Two Hands Coffee shop opened its doors last month in Austin, Texas, it represented the ideal outcome of the influence and cooperation of several progressive institutions — specifically, a university, a roastery, and a nonprofit social enterprise.

Owner Aamil Sarfani graduated from Emory University in Atlanta, Ga., just last year. Before he did, he took a course at Emory’s Goizueta Business School called Social Enterprise in Nicaragua, which involved travelling to the coffee-growing region for a ten-day trip that reinforced the study of how commerce and trade-based solutions have the potential to achieve positive social impacts, improving the lives of trade partners that struggle at the bottom of the chain.

“I went to that trip not thinking that I’d come back with a business idea,” Sarfani told Daily Coffee News. “But I went to Nicaragua, we stayed on the El Petén and Los Pinos coffee farms, and got to see how good coffee is grown.”

The trip moved Sarfani, and set the stage for the rapidly expanding business that’s just gotten off the ground in Austin. “The farmers that we partner with, that I met down there, really inspired me to do all this,” he said Sarfani. The Emory course was in conjunction the university’s Farmers to 40 initiative, a nonprofit business founded in 2013 that encourages economic and social development in coffee growing regions by cutting farmers into the proceeds of roasted whole-bean retail to the tune of 40 percent of the purchase price of every bag sold. The farms Sarfani visited through the school are among the farms benefiting from a relationship with the nonprofit.

On the roasting end, Farmers to 40 partners with the Atlanta-based company Octane Coffee, the exclusive roaster of all current Farmers to 40 coffees. Upon his return from Nicaragua but before moving to Austin, Sarfani underwent about three months of professional coffee training at Octane. The connection forged through this period as well as through Farmers to 40 made Octane the obvious choice for Two Hands’ other roasted coffee offerings. The opening lineup of coffees at Two Hands includes the two single-origin Farmers to 40 coffees from Nicaraguan farms Sarfani visited — both of which are sold in packaging branded by Farmers to 40 — as well as batch drip and decaf blends by Octane.

“They do great coffee, they roast really well and they also do a great job of ensuring that they’re getting their beans ethically sourced,” said Sarfani, adding, “but we really hang our hat on our Los Pinos beans, our El Petén beans, our other drip coffee and our espresso all being Farmers to 40.”

Coffee drinks at Two Hands include Hario V60 pourovers and espresso through a three-group La Marzocco Strada EE, as well as mechanized batch brews. Also on the menu are locally made pastries and sandwiches, plus a selection of local beers and wines. The 45-seat, 1,880-square-foot café is situated among a dense block of bars and restaurants called Rock Rose, which is essentially the entertainment and hospitality street at the Domain, a large and busy combined residential, business and retail development on the northwest wide of the city. 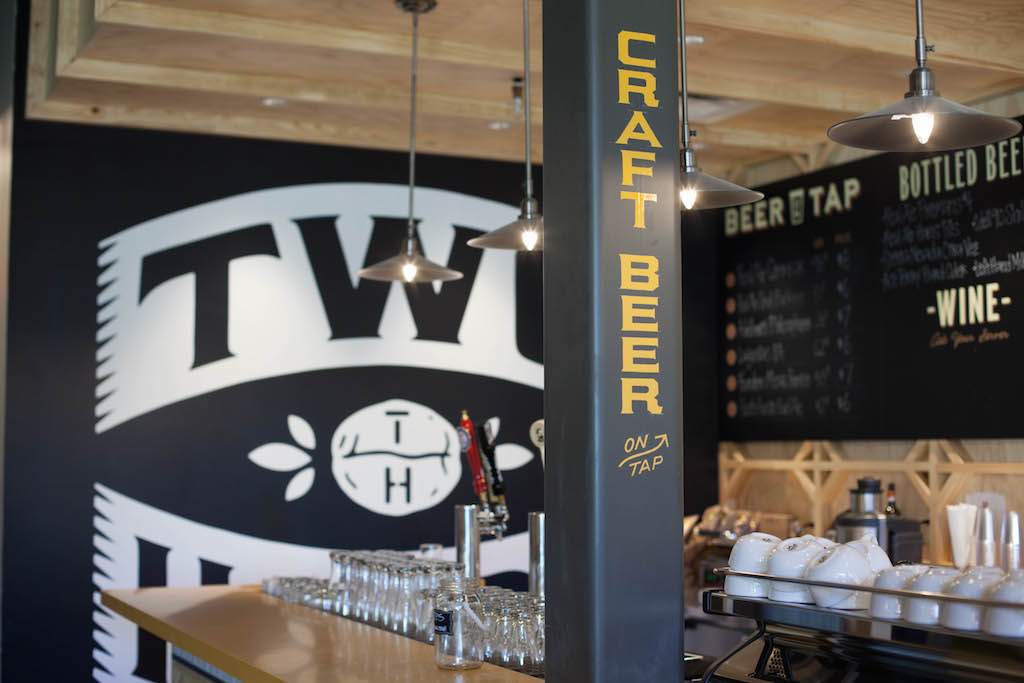 Tech company offices, over a thousand apartments and one of the city’s biggest shopping malls all bustle nearby, sending no shortage of consumer traffic through the area. Business the first month has been steady, with Sarfani reporting particularly strong sales of pourovers. Given the nature of the Farmers to 40 program and its irrevocable link to Octane, bringing roasting in-house is not something that’s been discussed at this point, although it’s not ruled out for the future, either.

“It would be part of our plan once we opened our second, third, fourth and fifth locations, to eventually bring roasting in-house. However I’m aware that roasting is not an easy task. It’s an art,” said Sarfani. “Quality is what we really stand for. Right now Octane does a really great job, so we’re going to continue to partner with them until I figure out if roasting is going to be something that we want to do.” While on paper that sounds like a distant future decision, it may not be as far down the line as it seems, as construction has already started this month on the second Two Hands location. That shop is slated for opening in May of 2016 on Austin’s lively South Congress corridor. “We’re going to be doing more beer,” said Sarfani of the next location. “We have six taps here, and we’re going to be doing 20 taps over there.”

So, when it’s about 4 p.m. and Austinites are struggling to choose between a coffee and a beer, they’ll be relieved to remember that they’ve got Two Hands.

Interesting set up, sounds like an amazing deal for the farmers. Having been part of the coffee farming community in Costa Rica for 15 years i am curious because i think i have seen it all: direct buyers that are not buying direct, direct buyers squeezing the living lights out of the farmers, etc, etc so i have questions. How much are the farmers getting, how is it calculated, based on market price? Is there a floor price? Is the farmer still getting good money for the coffee after the chain of companies/organizations marking the product up?

Hey Matias! So, I’m sure the Farmers-to-40 Website gives more detail, but our coffee is not on a set price. We always pay the farmers 40% of the per-pound price (which usually ends up being $2-3 more per pound than Fair Trade pricing which is $1.60-1.90 per pound.) For example, the beans we use for our pour-overs cost us $10 per pound, so the farmers are getting $4. Hope that helps!

Interesting location choice, I used to live a couple miles from there and while it is in Austin (very North Austin) it’s not very close to downtown at all. Glad to see they are opening a South Congress location.