From SCAA 2016: The Debut of Customizable Cupping App OpenCup 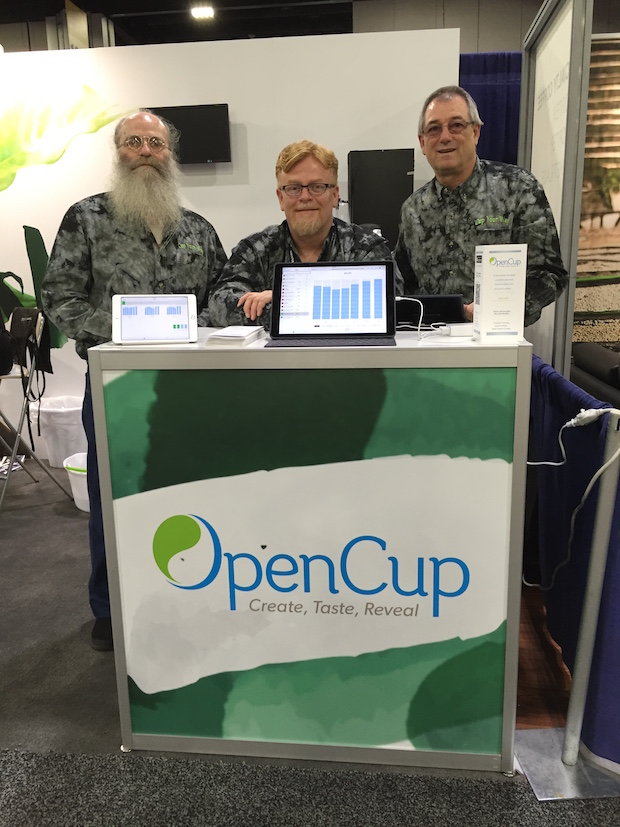 While the effort is ongoing to create a single, universal lexicon with which specialty coffee personnel the world over can communicate their findings in the cup, the persistent reality is that in this vast, global industry, different businesses will inevitably go about things differently, no matter what anybody else is doing.

In-house systems of language and cup scoring have developed for many companies over their many years in business, although these businesses stand to benefit just as much from transitioning off of inefficient paper-based systems and into the world of digital convenience. To that end, a new iOS-based cupping app called OpenCup is coming soon to the iStore to accommodate coffee professionals’ desire to digitize their cupping processes while maintaining the same procedures, metrics and lexicons with which they’re already familiar.

OpenCup is a product of the Artisan Coffee Group LTD, a close-knit team of three, helmed by Marty Curtis, founder and owner of the roaster and afterburner building and refurbishing company Combustion Systems Sales & Service Inc.. Curtis, one of the first officially licensed Q-Graders, also a certified Q-Instructor and SCAA certified instructor, has decades of experience in specialty coffee that includes such distinctions as membership to the SCAA’s Standards Committee, and a somewhat controversial 2014 campaign for the position of 2nd Vice President of the SCAA Board.

Curtis has been tinkering with computer-based systems for recording, storing and sharing cupping data for years, and finally enlisted the help of some even tech-savvier professionals to finish the job. These are IT & Project Coordinator Bob Sanders, a.k.a. “The Technologist,” who brings to the table his experience automating paper processes & data flows for a county government in Florida, and iOS software developer Danny Hall, a.k.a. “The Mastermind.” Together they designed an app that they say not only reduces data-entry-related errors, but cuts down on the time spent recording cupping data by roughly 90 percent.

In contrast to other systems that depend on internet connectivity for their storage and communication functions, OpenCup works offline, and includes Bluetooth-based functionality streamlined for communication with devices in the absence of WiFi. This, coupled with the flexibility for companies to create forms for their coffee scoring systems, procedures, and lexicons, and to visualize their results in whatever graphing or charting format they prefer, makes for what Sanders describes as an intuitive, efficient and distraction-free cupping experience with minimal learning curve.

“We created a little engine that allows people to create forms that meet their needs,” said Bob Sanders, who reported having recently tested the app at a professional cupping of over 70 coffees in three days, with a group that included several first-time cuppers that had never used the app before. “After a brief introduction, they were flying right through the coffee evaluations.”

“One of our key paradigms in developing this app was, technology can never be a distraction from the main task of evaluating coffee,” added Sanders. “You couldn’t worry whether or not you had a current connection, whether your information was being uploaded correctly or not, any of that kind of stuff.”

The app allows users to generate a lexicon on the fly, or save and share a template for use by an entire company, including old or new SCAA cupping formats if one prefers. “The cupping setup, a scoring form, the way a scoring form is used, how a cupping is run, using a company lexicon, it’s all up to how a business wants it to perform,” said Sanders. “They dictate, not the software.”

By virtue of this flexibility, the app is equally accommodating of cuppings outside of the specialty sphere. “Our app doesn’t discriminate between specialty coffee, commercial coffee, arabica, robusta,” said Sanders. “If you’re a commercial coffee person, robusta-only, no problem, the app will handle that just fine, too.”

Over time, according to the app-makers, the accumulated cupping data will benefit farmers as well as buyers, by providing quantified feedback that might contribute to a better understanding of the quality of their coffee, which could influence their practices going forward. The OpenCup app is currently under review by Apple, and will be made available in the iStore upon approval.