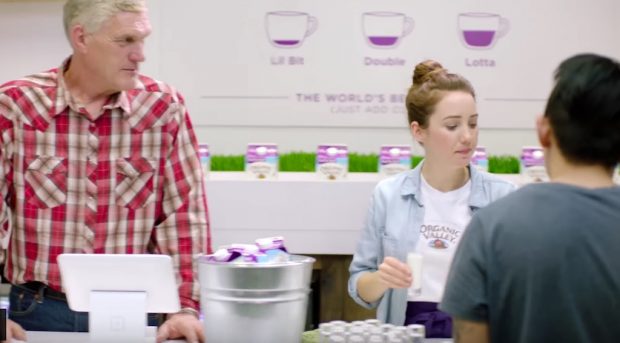 At the Organic Valley pop-up shop in Nolita last month, where silly New Yorkers proved they’re willing to spend their money on anything as long as it looks fancy.

One of the hallmarks of foodie-ism, “organic” as a marketing concept and certified production process is relatively new, finding traction throughout the United States in the 1980s and 1990s and running strong today.

So when a group of Wisconsin family farmers banded together to launch the Organic Valley cooperative in 1988, first focusing on vegetables then finding even greater success in dairy, they were in a certain sense on the leading edge of a trend in supporting individual farms and quality-focused sourcing standards. And they and their fancy, expensive milk probably got made fun of for it at the greasy-spoon diners of Richland Center or Reedsburg.

Fast forward nearly 30 years and Organic Valley, now the nation’s largest cooperative of organic farmers, is poking some fun of its own at the “hipster” coffee world in a new marketing effort supporting its organic half & half products, including what it says are the first two organic-certified flavored half & halfs on the market.

“If you want to be taken seriously in the coffee world, you need a tiny storefront in a hip neighborhood in New York City. I just saw a girl with a ukulele,” Organic Valley dairy farmer Gerrit van Tol says in a new video promoting a fake pop-up coffee house that briefly set up shop last month in the upscale Nolita neighborhood of Lower Manhattan.

Instead of selling coffee, the shop sold $2 cups of half & half in three sizes (lil bit, double or lotta), and instructed customers to add their own coffee from carafes sitting where a milk-holding condiment stand might be in a traditional shop. Throughout the video, van Tol — a broad-shouldered, red-flanneled man who looks as though he just stepped off a Wisconsin dairy farm — says things like, “We’re going to need one of those modern logos, with an X in it, or some arrows, that says when you were established,” and later, to a herd of pasturing cows, “The hipsters in New York City love you girls.”

All a big joke, right? The problem is, that’s not totally clear. Along with what are obvious jabs, van Tol says things in reference to OV’s dairy, such as, “If you want a quality product, you have to source the best ingredients out there,” and, “the secret to a good cup of coffee is our pasture-raised cows.”

Are those statements not intended to be sincere?

At one point, van Tol is talking about two different types of natural grasses the pasture-raised cows are feeding on and their importance in the finished product, before he then blows the whole concept up by sniffing a handful of grass, putting some in his mouth and saying, “There’s a real grassiness to it.”

Ok, we get the premise: Dairy farmers aren’t as pretentious as New York baristas. But doesn’t the nature of this parody also undermine OV’s decades of espousing the virtues of its own branded organic products, if not also the efforts of other organic farmers, including those in coffee, who toil under much more difficult circumstances and with far lower compensation, and whose product is central to the punchline here?

Or perhaps I’m being too serious, and should settle down with a big glass of fine, organic, grass-forward whole milk with notes of New Zealand rye.

Love it! It’s all good, tongue-in-cheek humor. And, perhaps, shows that New Yorkers (and likely other “city folks”) will go for just about any marketing & sales gimmick when it’s developed specifically for them.

Great video. Just sent it to all my coffee snob friends. Being from Minnesota, this really hit home.

Amazing that any corporate dairy would try to mock an industry (Specialty Coffee) that drives an enormous part of its sales. Whoever developed this ad campaign should be fired.

Milk is for bad coffee:

Perhaps the dairy industry is sad because many in the the Specialty Coffee industry are trying to let great coffee stand on its own, as it should. The weaning of America’s coffee drinkers off of the dairy teat can’t happen soon enough, IMHO.

Milk is also bad for humans:

from acne to prostate cancer, the only animal that should drink milk is a baby cow (which is what it’s designed for).

Milk is bad for the environment:

The dairy industry is a major contributor to climate change.

Sorry for the rant. Unintended consequence of this lame commercial.