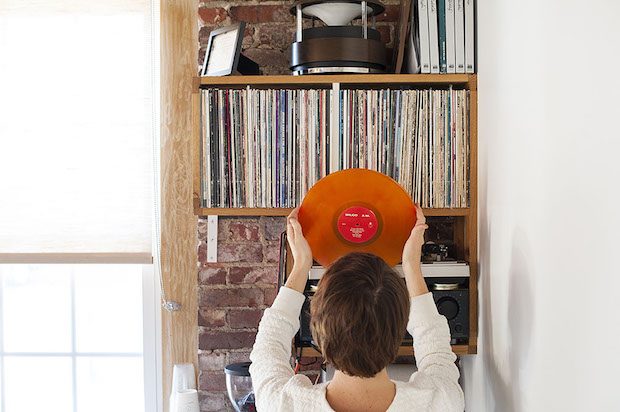 Music lovers often relish vinyl records not only for their warm sound, collectability and larger format of artwork, but for the sheer physicality of the thing, the real-life event of an actual needle placed by human hand in a machine-pressed groove.

People that enjoy excellent coffee also typically enjoy it prepared in any number of largely hands-on methods, such as pourovers or well-crafted espresso. Those that strive to make the best possible coffee at home are also therefore likely to have a record player — the pourover of music formats, one might say. This is the thinking behind a new partnership between Portland, Maine-based Tandem Coffee Roasters and KMA, an audio equipment and vinyl record store.

Tandem and KMA have joined forces for a new monthly coffee-and-LP delivery club called The Good Thing, which is already sold out for its debut next month. A subscription cap is necessary due to the limited availability of copies of any given LP, as every pressing is inherently limited. Therefore The Good Thing must be measured in its endeavor so as not to over or undersell slots in the club, although every sold out month motivates the partners to aim for a higher cap in subsequent months. 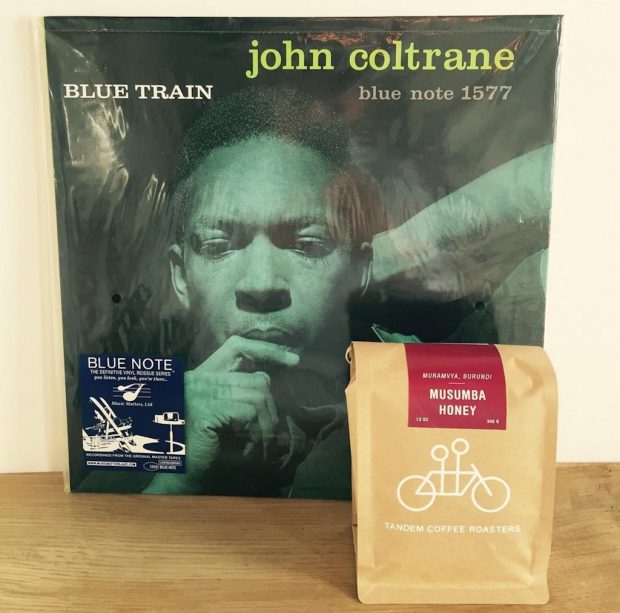 The first subscription package, including a reissue of the 1958 Blue Note Classic LP Blue Train by John Coltrane and a honey-processed single-origin coffee from Muramvya, Burundi, roasted by Tandem Coffee Roasters.

“The plan right now is to add five to ten every month, depending,” Tandem co-owner Will Pratt told Daily Coffee News. Pratt reported that the inaugural month sold out its 15 spots almost immediately. Should July sell out as quickly, they might jump up to 50 spots for August, and so on.

Pratt will select the coffees for the club every month, while KMA and Tandem will trade off months for who gets to choose the record. Both for coffees and for albums, there’s no common thread except that it’s something well-liked by everyone involved. Planned albums will bounce around genres including jazz, folk, metal, indie rock and beyond, while coffees will depend on what’s seasonal and best at the time, and neither component is selected just to clear it off a shelf.

“This isn’t a way to get rid of past-crop coffees or anything like that,” said Pratt. “It will be a new exciting coffee that we really want people to have, and a record that we love.”

Pratt originally wanted to include a card with some kind of explanation of the pairing, but music partner Joe Kievitt of KMA, whose background in the arts has exposed him to plenty of strained prose that attempts to parse through the meanings of various works of art, threw cold water on that idea. “He was like, ‘No, I do not want to write some big thing like ‘these go together because of this,’ coming up with meaning after the fact,'” Pratt said of Kievitt’s reticence on the matter. “So we were like, ‘you know what, let’s not even pretend we’re doing that.'”

Pratt sources greens through importers such as the Collaborative Coffee Source, Florida-based Brazil specialist Rio Claro Coffees, Café Imports and Olam for roasting on a Loring S15, which Tandem added to its existing Probat L12 machine.

The company roasts for wholesale as well as for their own two retail locations, one of which is a 200-square-foot tasting room at their industrial East Bayside roastery, and the other a 1,400-square-foot high-volume bakery café in Portland’s West End. 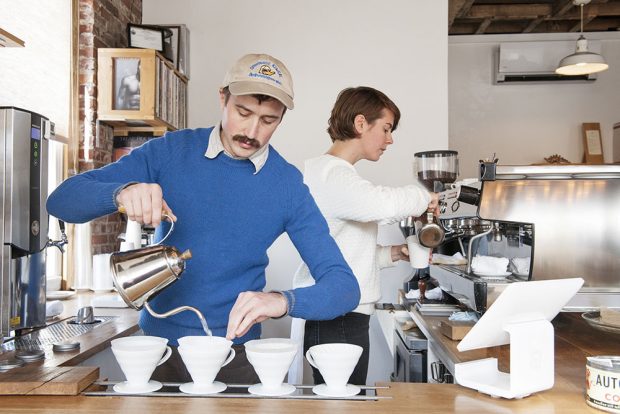 Will and Kathleen Pratt of Tandem Coffee Roasters. Photo by Nicole Wolf.

The service counter at Tandem’s West End shop consists of a La Marzocco Linea PB and Fetco brewer backed by a Mazzer Robur and a Mahlkonig EK43, respectively. Though the pace is too bustling at the bakery café for slow manual methods, Tandem does offer V60s at the roastery, alongside a La Marzocco GB5 that was given to the company as a gift from Blue Bottle, for whom Tandem co-owner Kathleen Pratt is the former East Coast operations manager. Pratt said Blue Bottle also offered them a roaster at the time, though at that point they were unable to accept. “We didn’t burn that bridge. Still friends with those guys,” assured Pratt.

Through more meticulous sample roasting processes, Tandem has lately been evolving in its approach to profiling, backing slowly down from the assertively light roasts of the company’s earlier years. “When we first started we were definitely like, ‘let’s go as light as possible!'” said Pratt. “That gets a little tiring from a lot of perspectives, because you get people saying it’s hard to dial in, and your palate gets a little over it, too, and yearns for other flavors.”

Subscribers and café patrons alike can therefore expect a bit more balance and development in the coffees served and shipped, as compared to their style of a couple years ago. The Good Thing subscriptions cost $30 per month and includes a 12-ounce bag of beans and a record selected for love and for no other reason.