Through Coffee, 7-Eleven Has a Remarkable History of Knowing Who Will Be the Next President 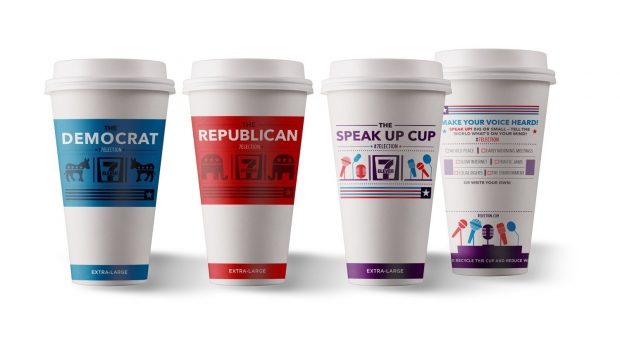 With the U.S. presidential tickets in order and the first of the major national debates forthcoming, convenience store chain 7-11 is again rolling out its 7-Election campaign, asking customers to cast their highly unofficial vote by way of selecting a cup color for their to-go coffees: blue for democrat, red for republican.

Sure, this is the marketingiest of corporate-markety campaigns. In addition to its thriving beer, gasoline, smokes, cheesy puffs, jerky and instant lotto sales, 7-Eleven is hoping to capitalize on the fervor of the electorate and the unprecedented divisiveness on display in the current presidential election cycle by selling a few more cups of piping hot batch brew.

But here’s the creepiest thing: Since the initial 7-Election campaign in 2000 — when George W. Bush narrowly defeated Al Gore by, according to some estimates, a single chad dangling in rural Florida — the “7-electorate” has never once failed to predict the winning president.

In short, the campaign works like this: Customers pick a cup for their coffee, either a colored one for their corresponding party or a non-partisan “Speak Up Cup” that encourages customers to write in issues of importance to them (sorry Libertarians, the campaign is decidedly biased towards a two-party system). Coffee gets bought, cups get counted, and voilà, we have a 100-percent-accurate predictor of who will be the next president of the United States.

“7-Election is a warmup for the real election Nov. 8 and gets people talking about what party and what issues are important to them,” 7-11 Director of Proprietary Beverage Brands Rusty Smith said in an announcement of this year’s campaign. “Most polls measure only hundreds or thousands of voters. 7-Election has the potential to survey millions leading up to Election Day. We think the new ‘Speak Up’ cup provides a great way for our loyal coffee customers to let their voices be heard during the 2016 election.”

For as seriously as the company seems to be taking itself as a platform for political discourse, it is worth noting that the campaign is also part of a sponsorship partnership for The Onion’s special election coverage.