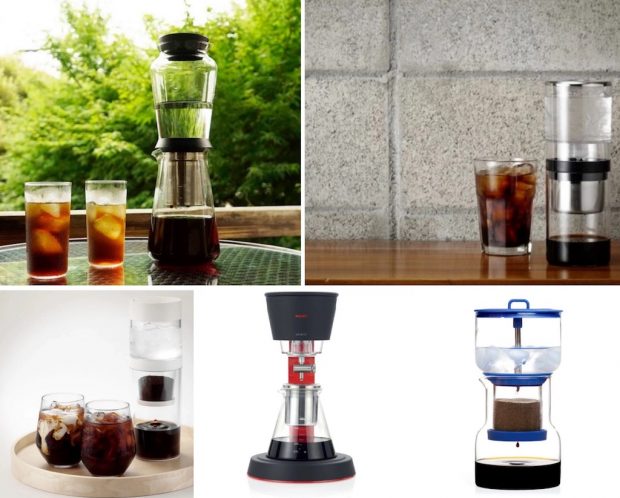 Now that slowly cold-brewed coffee is all the rage, it’s interesting to note that the slowest of them all — the slow drip method known alternately as Dutch or Kyoto-style cold brew — has risen in the ranks along with it.

As towering, spectacular drip systems are appearing in more and more North American cafes, so too has the method trickled into the U.S. home market via smaller-scale products with more straightforward, compact designs and consumer-friendlier retail prices.

One of the older of these is the Iwaki Water Drip Coffee Server, which has been around for almost a decade. Awarded a Good Design Award by the Japan Institute of Design Promotion after its release in 2007, the Iwaki is a much smaller, simpler and more affordable device than an ornate, full-on tower by the likes of Yama or Oji, although it lacks the feature of a controllable valve for setting the drip rate.

Slow drip in the home is a concept that’s been familiar to Asian markets for longer, with a variety of Iwaki-like products by manufacturers in Korea and Japan predating the current wave.

Yet in just the past few years there’s been a noticeable uptick in this subcategory in the U.S., the most visible indication of which began with the Kickstarter success of the Bruer. The campaign to fund the slow-drip brewer launched in September of 2013, and hit its $30,000 goal in one week. It then went on to rake in a total of over $190,000 — roughly 645 percent of the target. The Bruer also managed to begin shipping about six months after the campaign, which is impressively prompt for a KS-funded start-up. 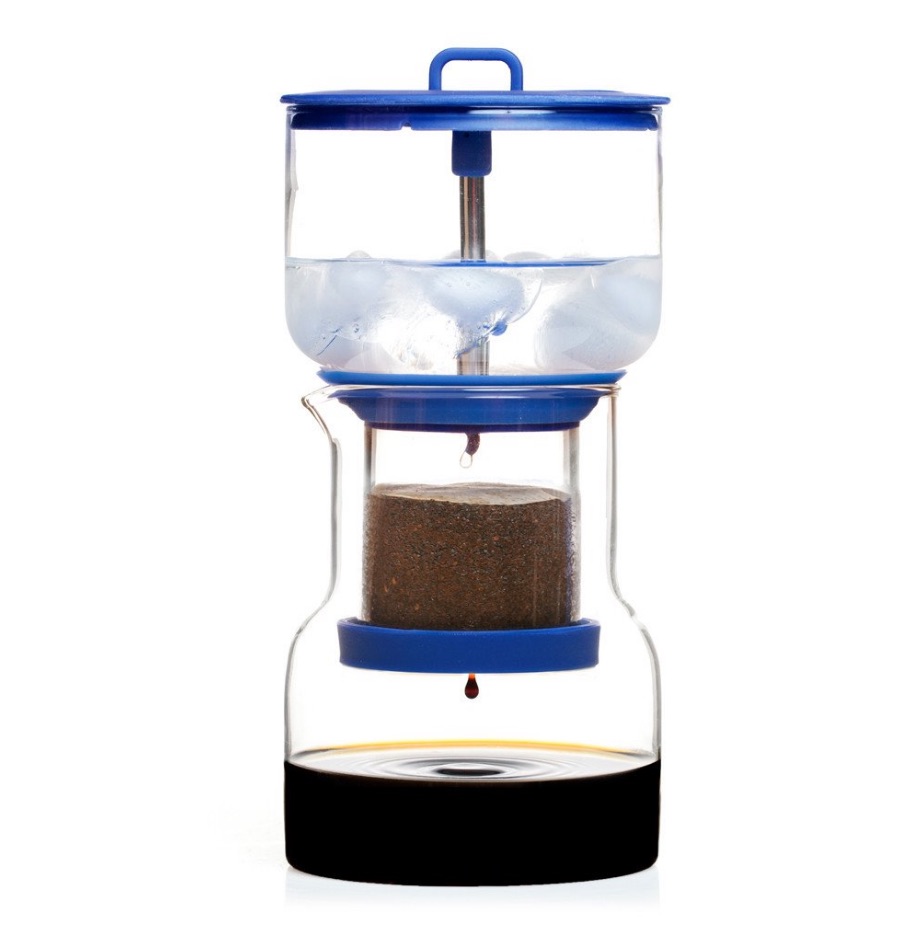 Also in 2013 at around the same time that the Bruer took off, on the higher end of the market and via more traditional means, Korean manufacturer Dkinz rolled out the Izac 700 Cold Brew Coffee Maker, a hip-looking device that very much resembles a standard household hot-drip machine. The Izac is instead an electricity-free slow-dripper assembled from quality components made of stainless steel, glass, Tritan and silicon, utilizing paper filters both below and above the coffee. Instructions recommend a slight tamp of the grounds prior to brewing and the device makes a 500ml batch of finished coffee in roughly 4-5 hours. 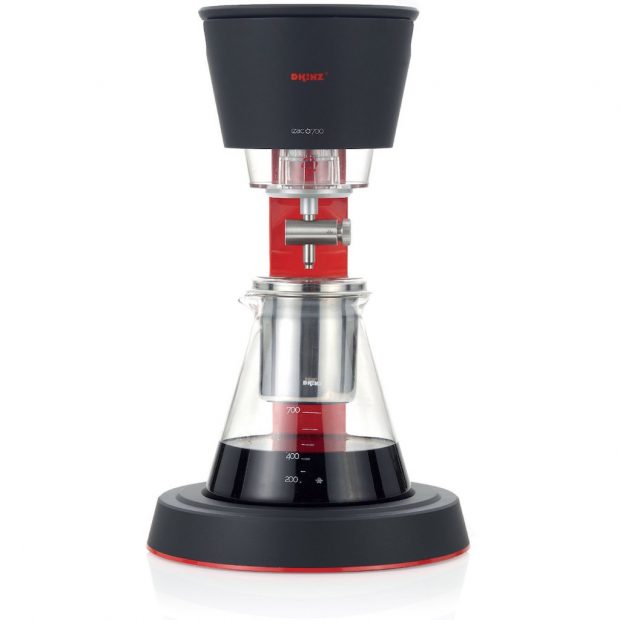 In December of last year, a Kickstarter campaign for a product called the Dripo just barely snuck past its funding goal. The Dripo is another cylindrical column-type brewer, only this one is designed with portability in mind, angled to appeal to travelers who might enjoy leaving a dripper active in a hotel room perhaps, for a finished, sweet, low-acid beverage after about 2.5 hours. The Dripo’s components also double as a travel-friendly vessel. It started shipping to backers over this past summer and is now available for purchase through standard online retail channels. 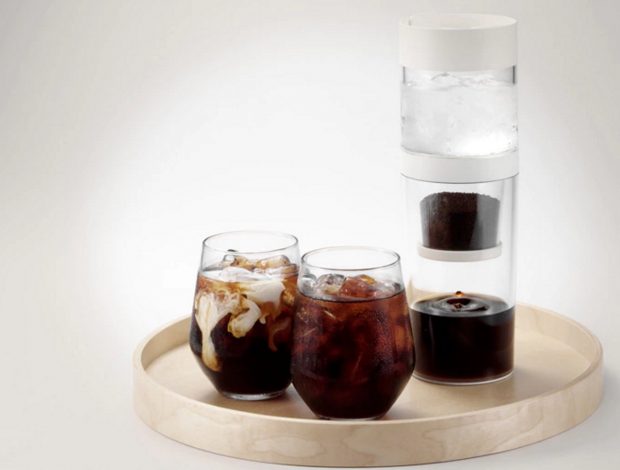 Last month on IndieGoGo, Los Angeles, Calif.-based brewer-maker BeanPlus wrapped a 40-day campaign to fund manufacturing for the second iteration of its air-tight Dutch-style dripper with a patent-pending dial-style valve design. The vaguely hourglass-shaped original version rolled out in select markets in 2015. The campaign for its updated, more cylindrical version surpassed its goal in three days, ultimately roping over $84,000 in a round that concluded at the beginning of this month. The product is already available for purchase online. 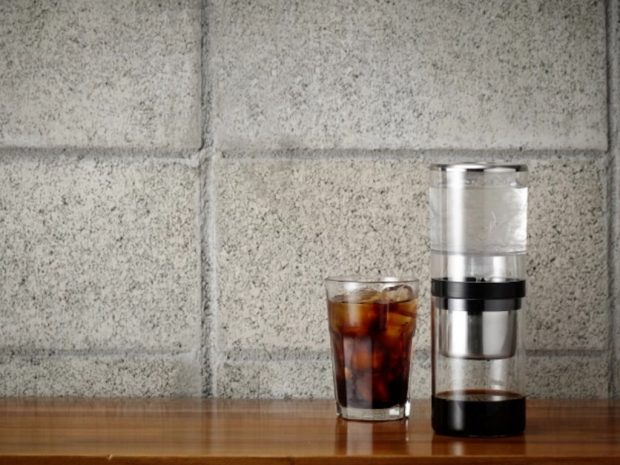 This month’s addition to the scene is the latest entry by Japanese maestro of manual method manufacturing, Hario. Never one to be left behind when it comes to the celebration of hands-on brewing, Hario’s previous products in the slow-drip category include the Potta, whose bulbous vessels, copper fixtures and outwardly extending valve-adjustment knob gives it a very lantern-like appearance, and the Clear Water Dripper, a science-lab-looking piece of equipment consisting of a right-angled clear acrylic stand to hold a glass pot with adjustable drip valve on top, a vessel of grounds in the middle and a receptacle at the bottom.

The former of these targeted the home market, the latter would not be inappropriate on a café counter, both have been around for much longer than the current craze and neither cost less than $200. Hario’s newly announced rollout is the Shizuku, another science-minded design that also seems to acknowledge the trend in streamlined shapes akin to the Iwaki and now the Dripo. 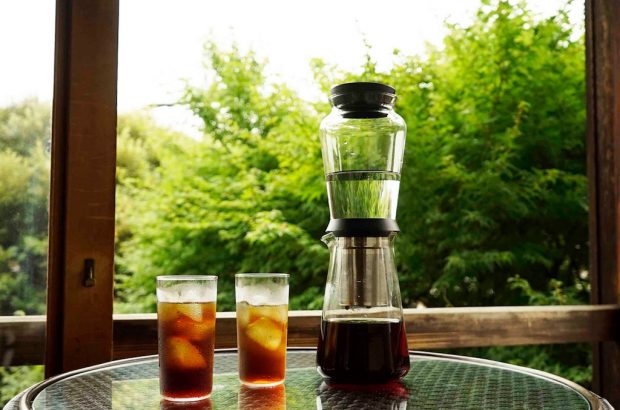 The Hario Shizuku cold drip brewer, revealed in a press release just a couple weeks ago, is notable for its speed, completing what the company considers a five-serving batch, allowing 600ml of water to pass through 50 grams of coffee in only 1-2 hours. It does not offer an adjustable valve, opting instead for the simplicity of a two-hole water passageway through which the resultant brew can be altered by adjusting the fineness of the grind per user’s taste. The MSRP has not yet been announced.