The New Day Dawns for Morning Bell Coffee in Iowa 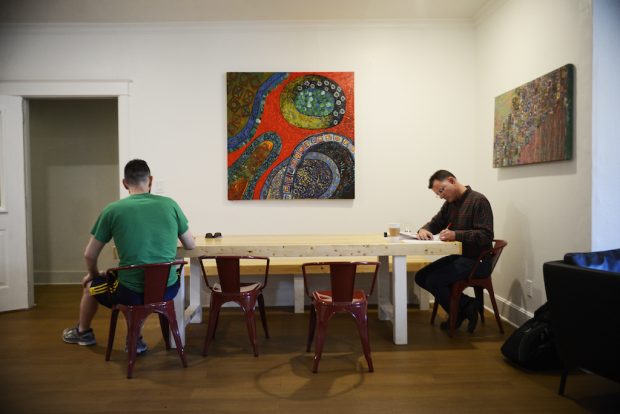 It was just over one year ago that Morning Bell Coffee Roasters pulled up the anchor from their Phoenix, Ariz. operation and set sail for Iowa, following founder Nadav Mer’s wife’s career trajectory to a new town in a new state in a very different part of the country. The roastery transplant — while not without a snag or two in the road — was successful, and at this point it’s been almost six months since Morning Bell has reopened in Ames, Iowa, doing better than ever.

Mer told Daily Coffee News that the process of finding and buying a building was an adventure in itself, and that the build-out had some surprises.

“We were able to buy a 100-year-old, original build-out building within a couple blocks of the original Main Street,” Mer said of the six-month search in a tight real estate market. “It was a building that was never listed for sale. We really had to work all the good-ol’-boy, backchannel who-knows-who around town to figure out who might have a building that they might want to sell.” 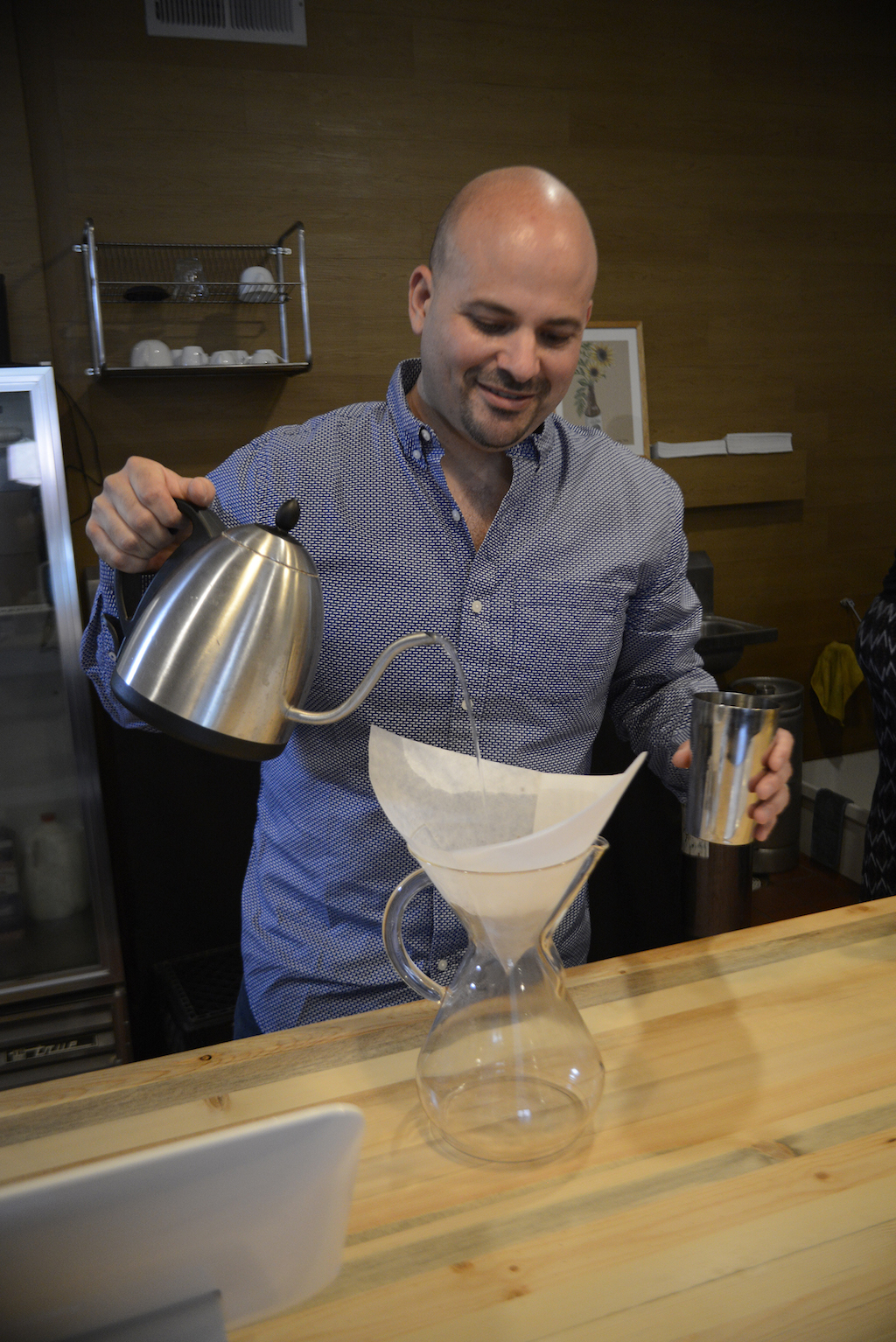 Buildout on the antique structure got bogged down by the grease trap requirement, which — coming from Arizona and Gainesville, Fla., before that, where pipes never get cold enough for fats and oils to solidify — was an unanticipated obstacle for Morning Bell. Said Mer, “We had a lot of work that we didn’t expect to have to do, to fulfill that requirement.”

After the property hunt and buildout hoops, the final twist on the way to their thriving state today came more recently, when the café’s semi-automatic espresso machine went on the fritz and needed to be replaced. “We had some misadventures trying to get a different, used two-group machine,” said Mer, who, along with his newly-hired crew of baristas, became excited by the simple, sturdy prospect of Pull Luxury Espresso spring-lever machines. 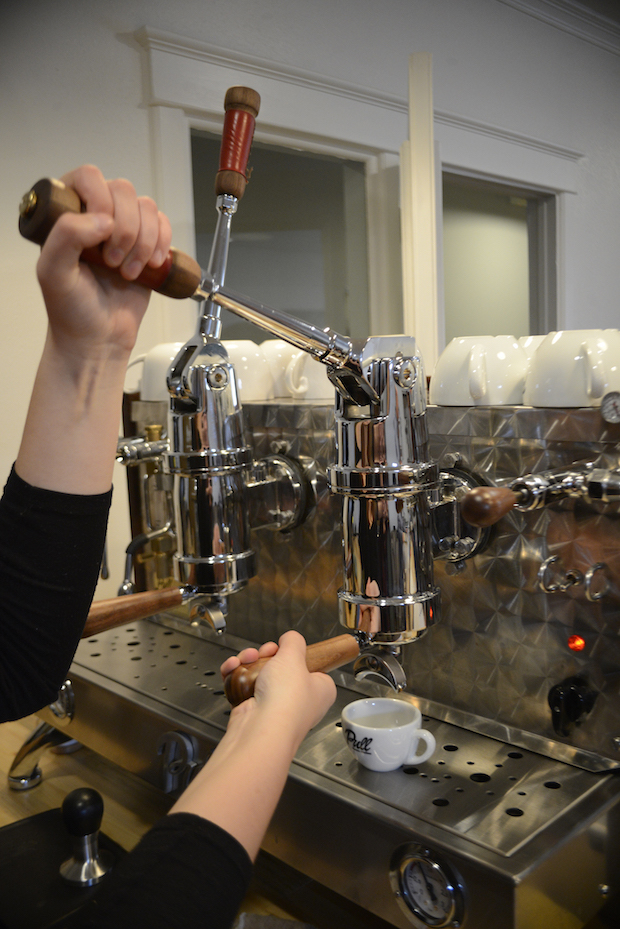 “We’re the ninth shop in the country to have one of these installed. That’s pretty special, to be on that list of first adopters,” said Mer. “I’m not usually a ‘first adopter’ kind of guy, but I like that this is a machine in the old style. It’s like being a first adopter for the horse and buggy.”

Now in their third week with a two-group Pull machine, the Morning Bell team has been loving it so far and enjoys that it’s also a good match for the market that they serve. “For us, as a small specialty shop, with our target market, it really is right on,” said Mer. “We can handle the extra step [of pulling the lever instead of hitting a button], as we balance it out with having much sweeter shots pulled in a much more delicate way.” 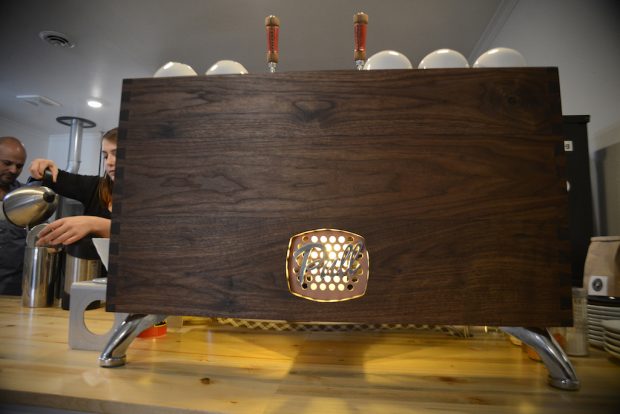 Mer notes that on one level, there’s the Iowan spirit of appreciating things that last a long time, such as the keeping of old farm instruments in good working order. Yet on another level, in the college town of Ames, Mer said internationalism and a sophistication particularly where coffee is concerned is the more immediately apparent culture, given students and professors from around the world and from other, bigger U.S. cities.

“They’re very well versed in specialty coffee. The average customer that walks into our shop is not asking for milk. They’re more interested to get into the minutiae of roast profiles and what varietal of Nicaragua we get from direct trade and stuff,” said Mer, adding that for these customers that have seen lever machines elsewhere, the Pull machine indicates to them that Morning Bell offers something special. 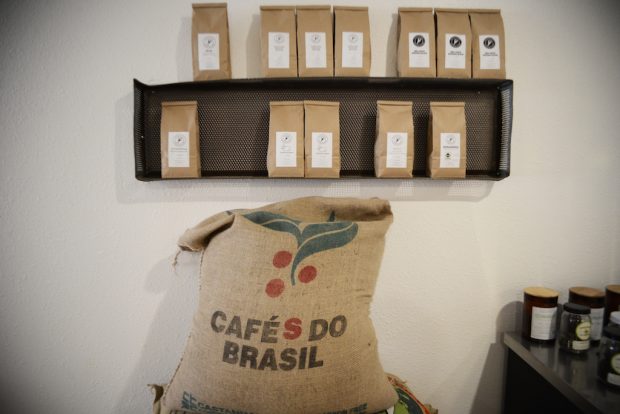 That direct Nicaraguan coffee source is Selva Negra. Mer also tends to source specific origins through companies that specialize in those origins, such as Keffa Coffee for Ethiopian coffees and IP Coffees for coffees from Mexico. All beans continue to be roasted on Morning Bell’s original 2-kilo capacity Ambex machine, which Mer expects to upgrade within the coming year to a 10-kilo or larger machine.

Looking ahead, if things continue their upward trajectory indefinitely, Mer can see there being multiple regional retail locations of Morning Bell in the future, especially considering what he sees as a booming market for specialty coffee in larger Iowa cities like Des Moines. “I feel like there’s a lot of growth possibility, regionally. We just have to wait and see what works for us,” said Mer. “As a first-time café owner, I still see it as experimental in some ways. We’re going to work on the café, build up the wholesale organically, and see where it goes from there.”