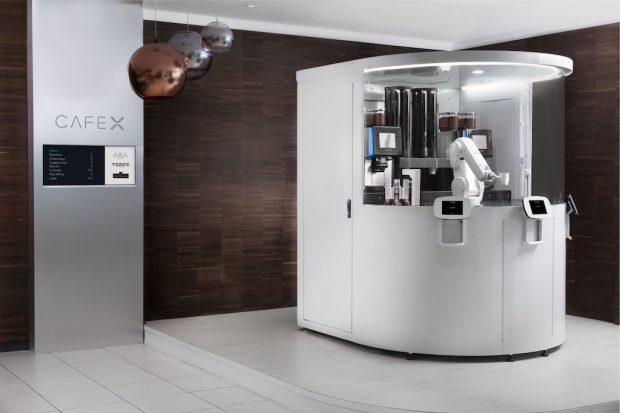 With backing from several Bay Area venture capital firms and angel investors, Cafe X describes the kiosk concept as a “robotic café,” designed to “eliminate the variabilities that bog down today’s coffee experience.”

The San Francisco kiosk has notably launched with coffees from three prominent California coffee roasting brands: AKA Coffee, Verve Coffee Roasters and Peet’s Coffee. Coffee prices vary depending on the selection, and Cafe X notes that single-origin coffees are available. In a sense, the system purports to quickly and efficiently offer all the coffee prowess of a craft-forward multiroaster café, minus the human baristas.

“I’ve long been a big coffee consumer and there’s never a guaranteed seamless experience,” Cafe X CEO and Founder Henry Hu, 23, said in an announcement this morning. “In today’s world, you have two options for getting a cup of coffee: You’re either in and out with something subpar; or you’re waiting in a 15-minute line for a great cappuccino. I started Cafe X to eliminate that inherent compromise and give people access to a tasty cup of coffee consistently and conveniently.”

The coffee-making core of the Cafe X system comes through a partnership with the coffee division of the German WMF Group, makers of fully automatic coffee machines, while the Mitsubishi-made robotic arms of the system are able to carry out tasks such as moving cups to dispensers for ingredients such as espresso, milk and syrups.

Customers can order the drinks directly at the kiosk or in advance through the Cafe X iOS or Android App. When a drink is ready, customers then enter a four-digit order code at one of the kiosk’s tablets to be served by the robotic barista arm. Prices start at $2.25 for an 8-ounce cup, and vary depending on coffee selection.

“This won’t replace baristas or the coffee shop experience that so many people have come to love — we don’t aim to do that,“ said Hu. “What we’re offering is the best possible experience for people who are looking for consistent specialty coffee to go.”

The San Francisco Cafe X is in the Metreon shopping mall at the corner of 4th and Mission in downtown.