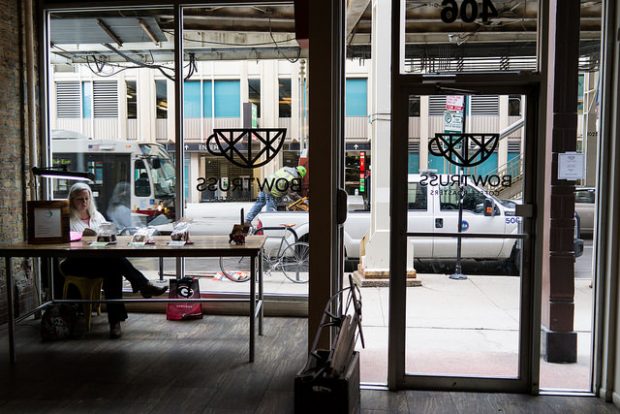 Chicago’s Bow Truss Coffee Roasters is suing celebrity entrepreneur Marcus Lemonis and his restaurant group, ML Food Group, LLC, after an acquisition deal between the parties soured during the due diligence phase.

The lawsuit filed Feb. 1 in Cook County (Ill.) Circuit Court alleges that, “The defendants devised a fraudulent scheme to attempt to purchase the plaintiff at a rock bottom bargain basement giveaway price and failing to accomplish that to destroy the plaintiff.”

The suit is seeking $6 million in compensatory damages and $20 million in punitive damages.

The CEO of Camping World and host of CNBC’s “The Profit,” Lemonis sent out a series of social media posts in December suggesting he was an owner or partner in Bow Truss — an 11-store coffee roasting and retail company founded by Phil Tadros in 2012.

The announcements followed a Letter of Intent signed by Lemonis and Tadros regarding a $3.25 million deal — the majority of which was to be used to retire Bow Truss debt — in which Lemonis’s group would assume a 90 percent financial stake in the business.

Bow Truss is now claiming that Lemonis’s group never intended to honor the LOI, and that it attempted to publicly destroy the reputation of Bow Truss and Tadros in order to drive down the purchase price.

The suit claims that the defendant was aware of certain Bow Truss cash flow issues at the time of the LOI signing, and on Dec. 22, a separate LLC held by the defendant advanced $97,000 to Bow Truss. Bow Truss requested an additional $180,000 on Dec. 29, and the suit claims that the defendant declined the advance a mere two hours before its scheduled time on Jan. 6, unless Tadros offered to “significantly lower the purchase price” and offer up his ownership stake in the business as collateral for the advance.

A week later, Bow Truss employees staged a walkout, saying Bow Truss was in some cases weeks behind on its payroll. The lawsuit claims that Lemonis reached out to the press and through social media to disparage the company after Tadros declined to agree to the alleged terms regarding the second cash advance.

In each of five counts filed in the suit, Bow Truss claims that public statements made by Lemonis falsely questioned the integrity of Tadros, falsely said Bow Truss failed to disclose certain liabilities and falsely claimed to discover financial irregularities and mismanagement within the business, while publicly describing Bow Truss accounting with terms such as “a weird maze” and a “giant labyrinth.”

Further, the suit claims that Lemonis publicly declared himself as CEO of Bow Truss during the due diligence process, and made contact with Bow Truss employees and creditors without Tadros’s knowledge.

“By falsely announcing that they had purchased the plaintiff, then contacting plaintiff’s creditors and employees directly, the defendants made it more difficult to negotiate with creditors and to manage its employees,” the suit contends.

Finally, the suit claims that on Jan. 23, Lemonis announced he was bringing his own coffee business to Chicago, and said he was hiring, while also mentioning that Bow Truss was behind on its payroll. A partially available tweet from Lemonis on Jan. 23 currently reads, “I’m bringing my #la biz in coffee to chicago. In the middle of the episode. #StayTuned jobs available.”

Tadros told Daily Coffee News yesterday that the majority of Bow Truss locations remain closed following the walkout, although the Loop location at Adams and LaSalle and the River North location have since reopened. He added sourcing, roasting and distribution are also ongoing.

“We are tying up loose ends with bills and trying to keep up, and we are in talks with many different potential investors and/or buyers,” Tadros told DCN. “It’s a very complicated time that hopefully gets figured out sooner than later.”