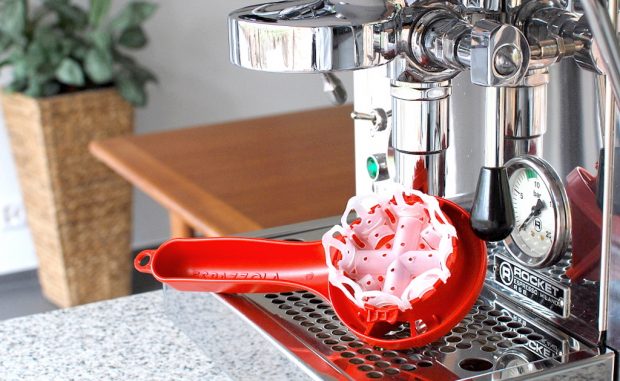 In recent times, the internal technology of espresso machine technology has made significant leaps. And yet for cleaning a wand between uses, most baristas still just use a damp towel. For cleaning the grouphead, a stiff-bristled stick remains the most common tool.

Yet if one new and one upcoming product from across the Atlantic provide any indication, the eyes of science may finally be shifting from the inner workings of espresso machines to the less glamorous but equally important fields of maintenance and hygiene.

In January, a webstore officially went online for the Espazzola, a new portafilter-shaped grouphead scrubber that’s engineered to flex into the many hard-to-reach nooks and crannies of a grouphead.

Inserted the same way as a portafilter but with a sturdy upward-facing silicon membrane, the Espazzola catches water flushed from the group during the wiggle-scrubbing action and channels it downward to the drip tray, thereby preventing the mess and scalded hands that sometimes results from wiggling a portafilter or scrubbing with a brush while activating the group. Designed by physicist Alexander Senger, the Espazzola also features variously sized plastic picks with which to poke crusted milk out from the tip of a sullied steam wand. 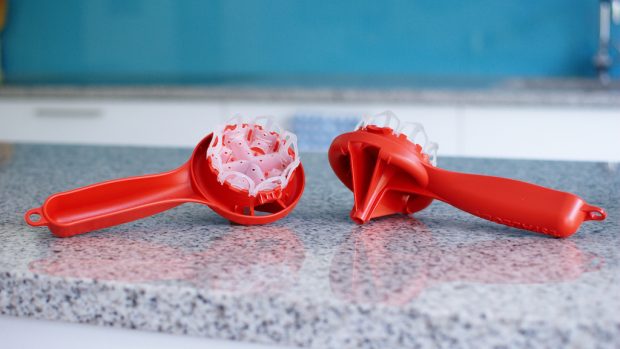 The Espazzola is made mostly in Germany. Its silicon scrubbing membrane is as rigid as stiff leather, according to Senger, who believes each membrane will have a service life of at least two years, though the product hasn’t existed for long enough to be certain.

In the development of the tool, Senger said that there was some consideration of a closed, sealed model that allowed for both backflushing a machine as well as the external scrub, though they went with the open/draining design for multiple reasons. One was that the intended plastic of the product couldn’t hold up to the pressure, but more importantly was that Senger does not believe backflushing a machine is as helpful as many machine owners seem to think it is.

“I would argue that backflushing as it is practiced today is mostly useless,” Senger told Daily Coffee News. “Backflushing is most often done in a rather quick way where the detergent has only a minute at most to take effect on the coffee residues. This doesn’t help a lot, as can be easily verified by opening up a shower screen after a backflush. In most cases there is still a thick black layer almost untouched by the cleaning agent.” 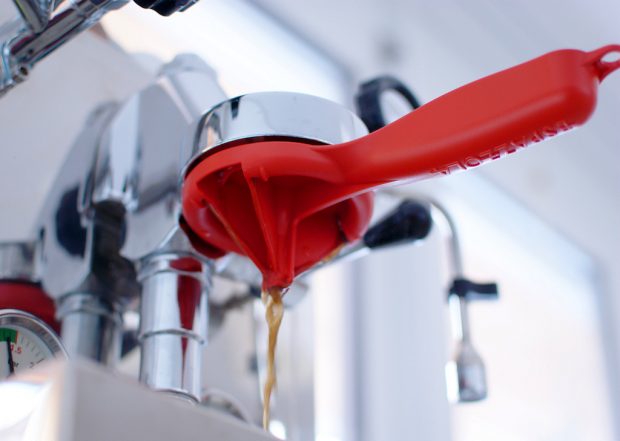 The Espazzola designer said that to dissolve a thick layer of aged espresso residue, a singularly backflushed dose of water and soap should be left sealed inside the group overnight, or for an hour at the least, to do its work — although such a technique also carries away some essential mechanical lubricants as well. For this reason, Senger recommends only doing such a backflush once every couple of weeks. Yet where the typical end-of-shift five-minute process of short soaks and wiggle-flushes are concerned, Senger is confident a scrub with the Espazzola gets the job done faster and more effectively.

Last month in the northwest England county of Merseyside, the Merseyside Innovation Award was given to industrialist Jonathan Quinn, founder, owner and CEO of interlocking concrete block manufacturer BlockWalls. The award was for his recent invention of a small, handheld ultrasonic cleaner for espresso machine steam wands.

Jonathan Quinn (right) receiving an award for the invention of his ultrasonic espresso wand cleaner, expected to reach the market this year.

Quinn has established a new company called Hygienic Innovations for the development of his steam wand cleaning device, a patent for which is also currently pending. It was October last year, after witnessing a barista in a well-known coffee chain location wiping a steam wand with what looked to him like a filthy rag prior to steaming milk for a drink ordered by his wife, that Quinn decided there had to be a more sanitary solution.

“My mind immediately began thinking about a better way to maintain hygiene in a busy coffee shop,” Quinn stated in a press release after receiving the Merseyside award. The one he’s come up with is a water bath, not unlike a jewelry cleaner, only in this case shaped basically like a milk steaming pitcher. The barista submerges a steam wand in the water inside the pitcher, where it gets zapped with ultrasonic waves that thoroughly clean and sterilize it in no more than couple seconds, equivalent to the time it takes to wipe and purge a wand by towel.

Yet unlike a towel, Quinn contends the ultrasonic cleaner removes 100 percent of bacteria and dirt as well as milk residue, both inside and out. Said Quinn, “It will have a major impact on hygiene and employee/customer safety.”

Hygienic Innovations has not announced a product release date for the product, although Quinn said he expects it to reach the market this year.