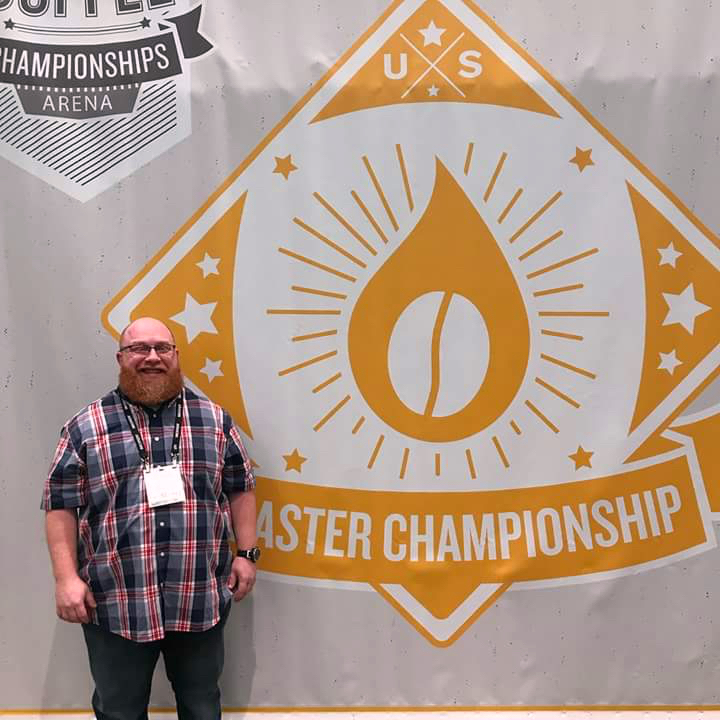 As a roaster, Onyx Coffee Labs‘ Mark Michaelson has had a busy Spring.

On top of his daily duties monitoring and manipulating greens that pass through a pair of Diedrich machines and a Primo sample roaster at Onyx’s Northwest Arkansas production facility, he’s also been carefully crafting competition coffees for use by two of his colleagues: USBC competitor and Onyx co-owner Andrea Allen (US Barista Championship) and Onyx barista trainer Dylan Siemens (US Brewers Cup). Plus, he made a run of his own run at the US Roaster Championship.

The Onyx crew represented in force at last week’s US Coffee Championships, with Allen placing second in the USBC and Siemens and Michaelson each taking top honors in their respective competitions.

“I didn’t know what to think of the competition,” Michaelson told Daily Coffee News of the USRC, adding that while he was encouraged to throw his hat into the ring by Onyx co-owner Jon Allen, he had little expectation of winning it. “I didn’t know if I’d be prepared for it, especially with Andrea and Dylan competing.”

Michealson and Jon Allen actually learned roasting craft together after forming a friendship at Onyx’s original Springdale bar. In just five years since, the company’s devotions to education, training and competition have allowed it to blossom into one of the country’s most revered smallish-batch coffee brands in terms of coffee quality and service.

This year was perhaps a fortuitous one for Michaelson, a first-time competitor, to wade in, as both the regional and national rounds this year introduced a presentation component. Roasters were judged not only for the quality of their finished products, but also for their intellectual dexterity in sharing their green coffee knowledge and their roasting approach, as well as in identifying flavors in a blind cupping.

“I think it’s valuable because a lot of times, as roasters, we have difficulty explaining things to people who don’t know coffee,” Michaelson said of this year’s competition format. “Another thing is sometimes you can actually throw coffee in a roaster and get lucky. This shows them that we actually know what we’re doing… You have to explain why you’re doing what you’re doing.” 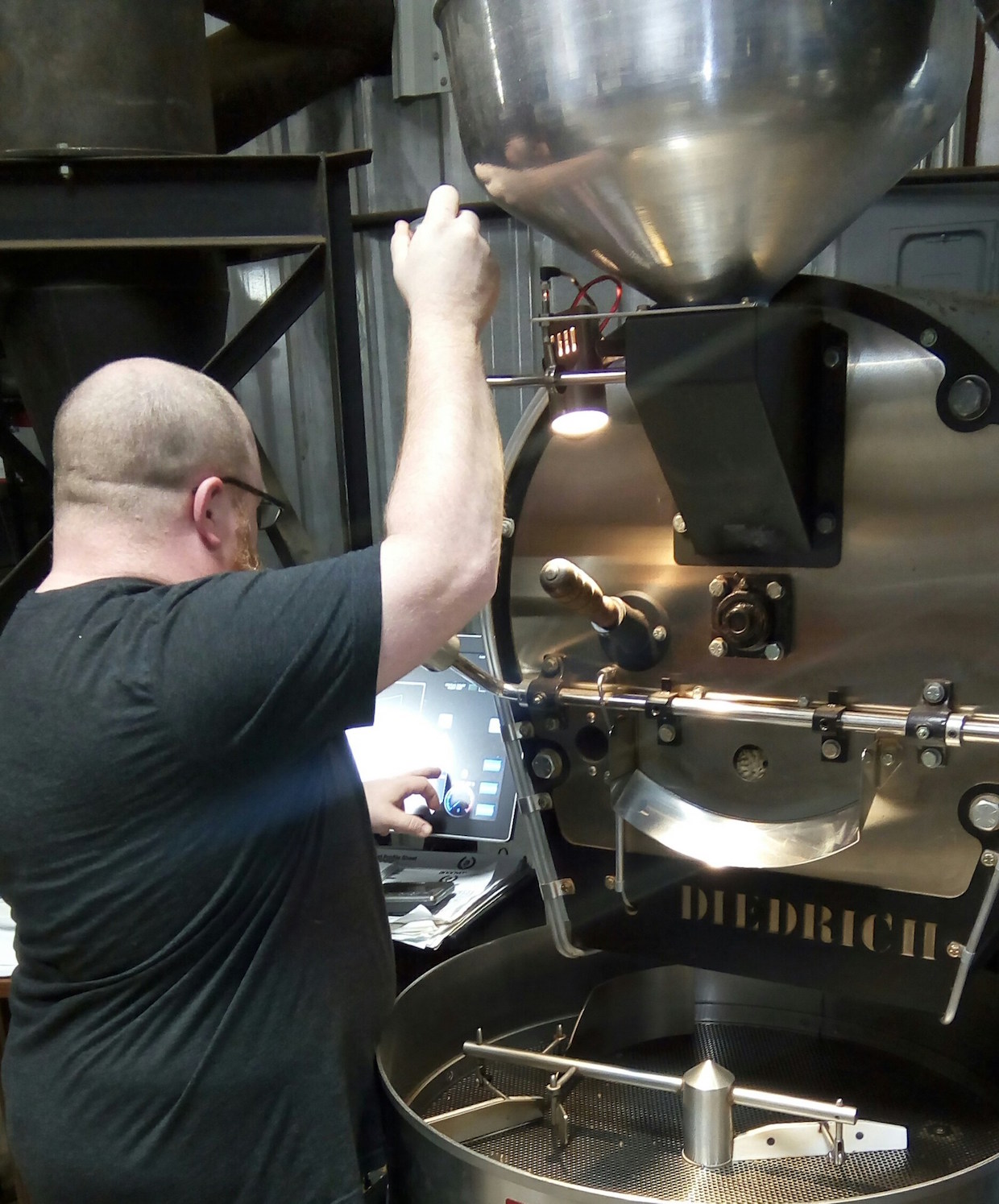 A former pastor, Michaelson is as comfortable behind a pulpit as he is behind a Probat. With public speaking secured among his skill set, he felt free to lean into his Q-grader knowledge and practical abilities, confident that the presentation itself would unfold as it should.

For this year’s regional round, from which 12 total roasting competitors emerged to move on to the national competition, the compulsory coffee was a Kenyan Karundu AA supplied by Genuine Origin, while the national round compulsory coffee was a high-elevation red-honey-process Caturra produced by members Resguardo Inga Aponte cooperative in Nariño, Colombia, supplied by Ally Coffee.

Michaelson said the coffee’s growth at such a high elevation, combined with the processing, presented a particularly dense green, leading him to increased heat at the beginning stage of the roast, while the naturally brightly acidic coffee could handle longer development of sugars at the roast’s end.

“I really like that coffee,” Michaelson said, “but if you weren’t really used to how hard it was to penetrate, if you put a normal roast profile on it, it might end up tasting like peanuts — underdeveloped.”

For the coffee of his choosing in the final national round, Michaelson went with an extremely limited quantity Asidra — a cross between Red Bourbon and Typica that roasters hail for its Geisha-like qualities. The coffee was natural processed through greenhouse-controlled lactic acid fermentation by Colombia’s La Palma y El Tucan, a company Michaelson lauded for its QC controls in picking and sorting that resulted in greens of remarkable consistency.

Taking into consideration the batch brewers that were to be used for the competition, he went with the natural for its prominent fruit-forward flavors, including raspberry when hot, strawberry when cooler, plus “huge amounts of candy sweetness,” combined with a lingering green apple finish.

“I knew that if I did use a washed coffee, it might come across as a bit delicate,” said Michaelson. “In my opinion, the industry is becoming more accepting of naturals. I find if you present it in a way where it’s clean enough, you’re going to get some of those fruit flavors that you just can’t get in a washed coffee.” 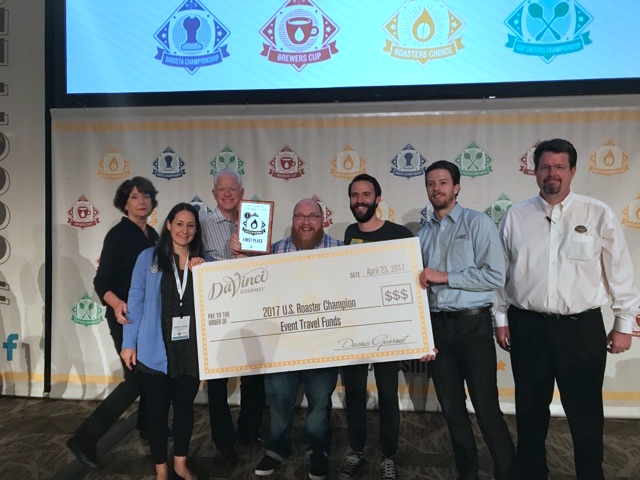 On riding that coffee to the top of the US Roaster Championship, Michaelson said he’s been somewhat overwhelmed by the unexpected success.

“To be able to stand by all these roasters and industry leaders who I respect — to take something you knew nothing about six years ago and now have people all around the world slapping you on your shoulder and saying they believe in what Onyx Coffee Lab is doing — it’s truly humbling,” Michaelson said. “It reminds you that this is all a lot bigger than your little corner of Northwest Arkansas.”