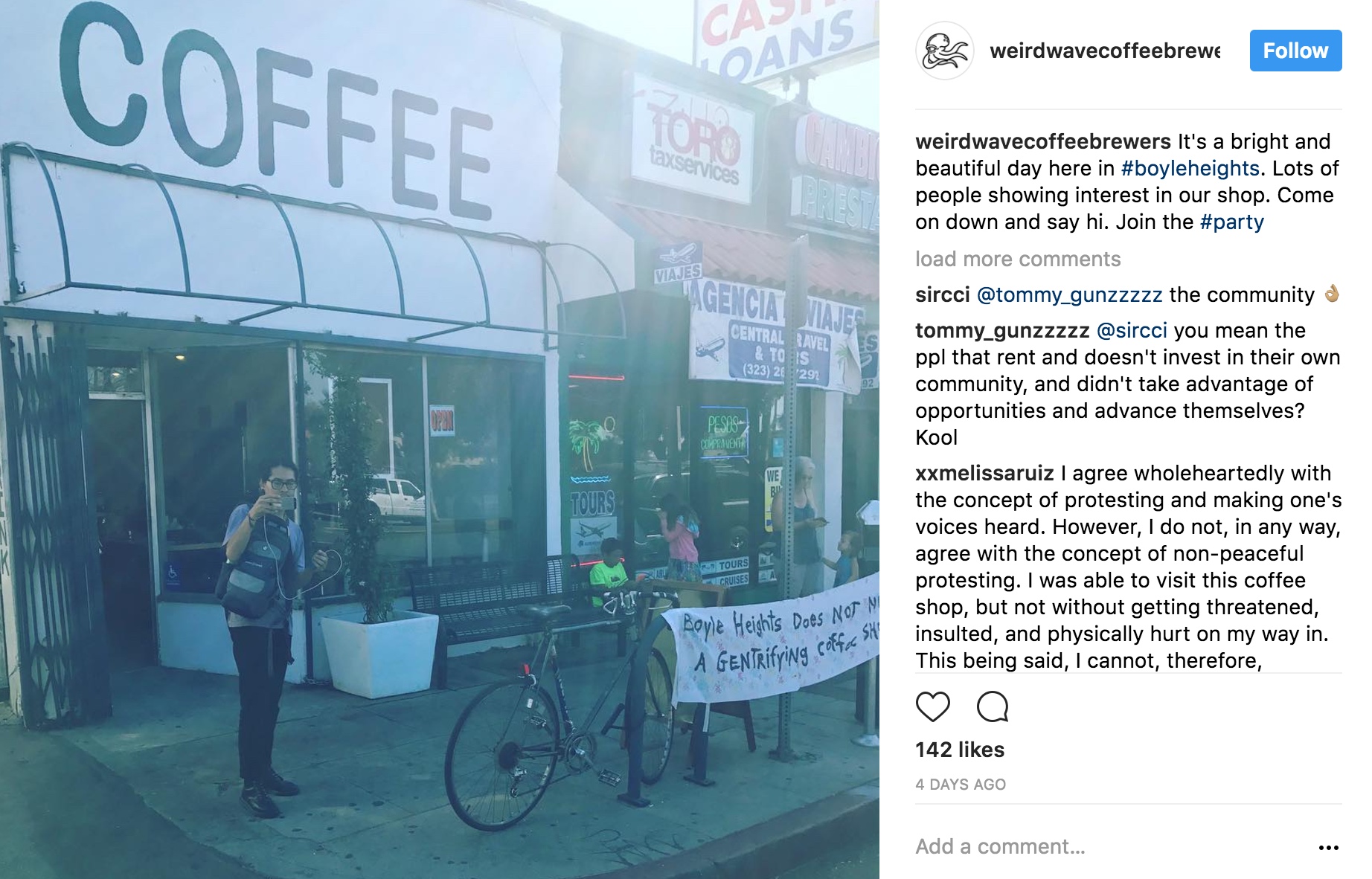 One of the groups behind the protests is called Defend Boyle Heights, and the group has been actively rallying members of the primarily Latino community to push back against Weird Wave’s presence. In a statement published on Facebook, the group said, in part:

Things will only escalate. Not because we want them too, but because this is literally a life or death, home or homeless, battle. Since the 1990s, Boyle Heights has struggled to get and keep authentically affordable housing. It’s not just about what a dozen of activists want; it’s about what all these residents who organize with all the groups that make up our coalition want.

Say no to Weird Wave Coffee! Stand with the low-income working class majority of Boyle Heights! This isn’t just about coffee; it’s about keeping Boyle Heights affordable! Dile no a los cocos! Gentrifiers are not welcomed in Boyle Heights! Fuera!

Owned by friends John Schwartz, Mario Chavarria and Jackson Defa, Weird Wave has maintained that the shop exists merely to serve quality coffee to the community, while not intending to represent any political or social movement. In a statement provided to Eater Los Angeles, Weird Wave’s Chavarria said, in part:

Weird Wave Coffee is a company owned by three individuals committed to a fair and consistent approach to the grass-roots enterprise of selling coffee. We recognize the role a coffee shop plays in a community, both as an advocate for that community but also as a vendor who’s role in the local economy is impactful. At Weird Wave, our goal is largely to supply incredibly delicious coffee and non-alcoholic beverages to the community.

Weird Wave’s approach to doing business locally begins and ends with keeping the flow of money inside the community. We take special pains to seek out vendors for our products who share our local-first approach.

LA Weekly reports that protests focused on the shop have been joined by numerous ant-gentrification organizations, even some from other neighborhoods including Highland Park and El Sereno. A grassroots coalition called the Boyle Heights Alianza Anti Artwashing y Desplazamiento (Boyle Heights Alliance Against Artwashing and Displacement, or B.H.A.A.A.D) has been active for several years promoting anti-gentrification efforts.

A nonprofit art space in Boyle Heights called PSSST closed earlier this year after reporting harassment from protesters and fundraising difficulties. In a published statement about the closing, the PSSST creators wrote, in part:

The ongoing controversy surrounding art and gentrification in Boyle Heights caused PSSST to become so contested that we are unable to ethically and financially proceed with our mission. Our young nonprofit struggled to survive through constant attacks. Our staff and artists were routinely trolled online and harassed in-person. This persistent targeting, which was often highly personal in nature, was made all the more intolerable because the artists we engaged are queer, women, and/or people of color. We could no longer continue to put already vulnerable communities at further risk.

While our closure might be applauded by some, it is not a victory for civil discourse and coalition building at a time when both are in short supply. The ongoing representation of a divisive battle–nonprofit art spaces versus the residents of Boyle Heights–resulted in the mischaracterization of PSSST as being fundamentally in opposition with the varied intersectional communities we aimed to support. This made fundraising an impossibility. Without financial support, PSSST, a fledgling nonprofit, cannot survive.

Third wave coffee shops follow gentrification, not the other way around. They only where there is a market to support them. Sorry BHAAD but it’s too late.

Third wave coffee shops follow gentrification, not the other way around. They only go where there is a market to support them. Sorry BHAAD but it’s too late.

So I wonder whatever happened to our right to life, liberty, and the persuit of happiness……. for the decent folks trying to serve a community and make a financial go of it. HOW is it that a local unelected unappointed group can decide WHO can do business within that city, and who must go? WHO decides these things, and on what basis? Seems the protesters are the ones “gentrifying” the area, deciding who can play and who has to take their ball and go home. What sort of business will they embrace? And on what terms? Who don’t these protesters start up the sorts of businesses THEY want in the area, and let the free market decide who stays and who goes? This is nothing less than marxist thuggism. And where are the police, dealing with the civil disturbance, closing of streets and sidewalks, interfering with vehicle and pedestrian traffic? Aren’t they the ones who “keep the peace”? Or have they been bought off too? This is beyond ridiculous.

its a tiny group of protesters. The ringleader is this woman Elizabeth Blaney – google her! daughter of Dodgers VP Charlie Blaney. She runs many groups with different names to make it look like its a bigger movement than it is: “Union de Vecinos”, BHAAAD, Ultra-Red, School of Echoes, and LA Tenant’s Union Eastside. She spreads a lot of money around to mobilize all this btw.

Huh, I thought diversity was supposed to be good.

Funny how there are these lamentations of “gentrification”, yet, non-whites have no issue infiltrating white areas or even formerly-Jewish areas — such as Boyle Heights.

Only in such an impossibly-stupid world are people in such arms over a coffee shop and openly wanting to run out white-owned businesses. Bigoted much?

I hear housing is cheap back in Mexico, perhaps they should consider going back.

it’s really true — elizabeth blaney is the self apponited patron saint of poor helpless mexicans everywhere, she’s like wonder woman and cesar chavez all rollled into one, but blond, er rubia. thank god for all of her hard word saving the mexican people from the horrible oppression of coffee

I can’t help but think that this shop and owners should initiate legal action against this she-dog of a hate monger. WHO appointed her the arbiter of who may/may not engage in business in an given location? Her peons are directly causing serious loss of income for these business people, not right. How many other such “operations” will she initiate against other helpless victims before she is taken to task for her harms? Being the child of a signficant sports team owner, no question about HER financial security. And WHERE is her Father, and WHAT has he taught her as far as how to live in society, how to treat others, etc? If SHE wants this place gone, she can put up HER money and buy them, Then turn it into whatever SHE thinks that area needs.

It would be fun to watch her enterprise for a while…… my bet is she is so spoilt she’d think the world owes her a living. She’d learn otherwise rather quickly