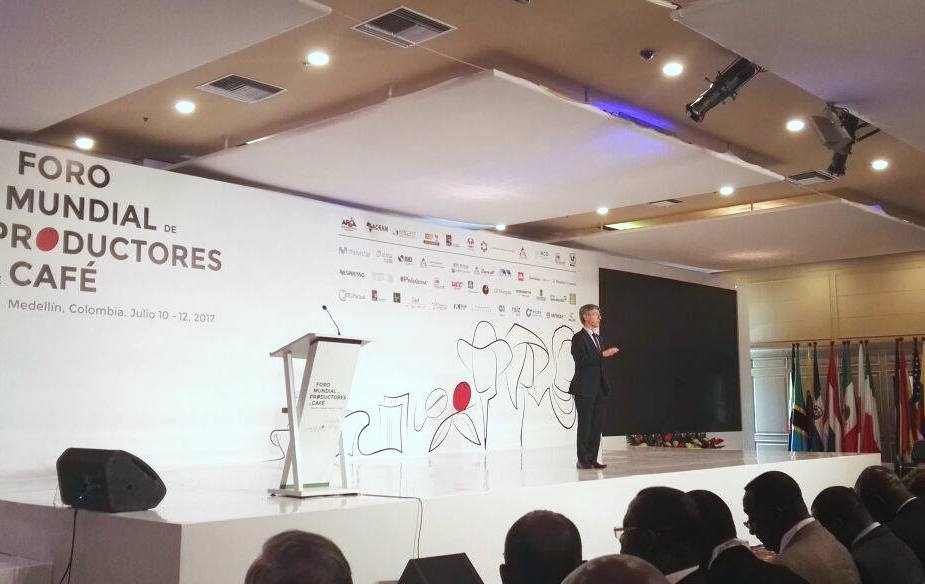 The inaugural World Coffee Producers Forum took place last week in Medellín, Colombia, bringing together hundreds of actors from throughout the value chain and resulting in a signed declaration and action plan designed to aid huge networks of producers throughout the world.

The Colombian Coffee Growers Federation (FNC), which helped lead the creation and execution of the event — which pulled together coffee producer associations from Africa, Asia and Latin America, with attendees representing 40 producing countries — said afterward that the action plan will be “developed co-responsibly by stakeholders of the global value chain” with the support of the International Coffee Organization (ICO).

In general, the action plan will focus on addressing “low prices and excessive volatility for producers (with larger profits remaining in the other links of the chain), adaptation to climate change, scarce workforce, reduced generational change and producers’ precarious social conditions,” according to the FNC.

The plan will also follow a new analysis of international coffee prices at the New York and London stock exchanges over the past 40 years, while comparing those to production costs and the realities of the physical market. The study will be conducted by an independent body.

In addition to the independent study, the action plan will involve the formation of a new committee that includes representatives of two producer organizations in each of the following regions: Africa; Mexico, Central America or the Caribbean; South America; and Asia. The committee will also include individual industry representatives from North America, Europe and Asia.

“We have just started a new process in the world coffee sector,” FNC CEO Roberto Velez said in an announcement following the event. “Today we finished a reflection, assembling ideas, a process of listening each other, but it is only the beginning of what we hope is a new stage.”

Brazil has offered to host the next World Coffee Producers Forum, which is expected to take place in 2019.

Here is the full text of the final declaration:

The First World Coffee Producers Forum met in the city of Medellin, Colombia, on July 12, 2017, and considering that:

1) Profitability of coffee farming in many producing countries faces a critical situation, even going through periods of losses, due to different factors such as: lower international coffee prices, which have dramatically deteriorated the coffee trade terms (reducing the purchasing power of coffee growers), low agricultural productivity, increasing production costs related to climate change and variability, and rising labor costs of production activities such as harvest.

2) Lower profitability has led a significant percentage of coffee producers in the world to live in poverty, with deprivations in their quality of life (housing, utilities, delayed or poorly attended education, low access to health systems, etc.), and reduced ability to reinvest in their farms.

3) Even if development of specialty coffee in the last decades has generated some premiums to producers, these have not been enough to offset the costs associated with certifications, and the analysis of value of the global coffee chain shows that the share reaching producers is very low, in contrast to that remaining in the hands of traders, roasting companies, and distributors to final consumers.

4) If corrective actions aiming to address the aforementioned problems in a coordinated way are not undertaken and their financing is not guaranteed, in the medium term the world may face a crisis characterized by a structural reduction of the global coffee supply, with the consequent impacts on quality of life of producers and their regions’ social stability, while global demand will continue growing without being met, which will generate undesirable imbalances in the coffee market that may put sustainability of the global chain at risk.

1) To work co-responsibly with all stakeholders of the global coffee chain and the ICO’s support to develop an Action Plan that shall be based on problems faced by coffee farming in different regions of the world, namely: very low prices to producers and excessive volatility, the largest share of the chain value remaining in the other links; adaptation to climate change, scarce workforce, difficult generational change, and precarious social conditions for producers.

2) The Action Plan shall define the goals to be met, the time period to meet them, and the required funding.

3) A co-responsible commitment to properly implementing the Action Plan and funding it must be achieved at the highest level with representatives of the industry, donors, international cooperation, multilateral organizations, and national and local governments.

4) As starting point for the Action Plan and based on inputs of the first World Coffee Producers Forum, a study will be conducted by an independent body to analyze the behavior of coffee prices in the last 40 years, production costs in this same period, and their correlation. The study will analyze if international coffee prices, both at the New York and London stock exchanges, reflect the reality of the physical market, and will present alternative solutions to the problems discussed in the Forum.

6) This Committee shall submit a progress report in the next meeting of the ICO’s International Coffee Council, to be held in March 2018.

7) The next World Coffee Producers Forum will be held in 2019. The Committee will coordinate with countries the venue of the next Forum.
This declaration is adopted in Medellin on July 12, 2017.