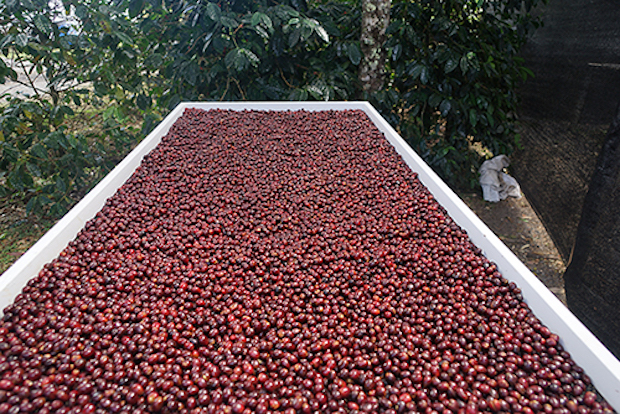 Just yesterday we erroneously reported that the lot of coffee purchased at $601 per pound at the Best of Panama auction in July was the most expensive per-pound purchase of green coffee ever at auction (note: that story has since been updated). As it turns out, these days the “most expensive” game in the highest quality echelons of coffee is a fast-moving one.

Green coffee producer and exporter Ninety Plus Coffee, which has operations in Ethiopia and Panama, has reported that its top-earning lot at an auction in September of this year went to a jaw-dropping high bid of $5,001.50 per kilogram (approximately $2,273 per pound) made by a company identified as Green Hills.

The coffee itself is lot 227 in Ninety Plus’s “José Alfredo Gesha Series,” a selection of coffees that came to fruition this year after Ninety Plus Gesha Estates in Panama General Manager José Alfredo passed along a 3-kilo experimental lot to Ninety Plus Founder Joseph Brodsky in 2016, according to the company.

Ninety Plus says José Alfredo was then asked to produce a series of these coffees at a larger scale for 2017. “There are no coffees like this in the world outside of this series,” the company wrote on its website in detailing the recent auction coffees. “This signature José Alfredo fermentation style delivers unprecedented complexity in the cup and promises an expanded future of the mind-boggling taste experiences displayed in this exciting series.”

Of all the José Alfredo Gesha Series lots purchased in Ninety Plus’ September auction — from 5-kilo “nano-lots” like lot 227, up to 100-kilo lots — none earned less than $300 per kilo (approximately $136 per pound).

In the context of coffee, these are staggering numbers and bewildering words.

Yet, like the $601-per-pound coffee that’s the centerpiece of a tasting experience next month at Klatch Coffee in Rancho Cucamonga, Calif., a José Alfredo Gesha Series coffee is making its way to U.S. consumers next month through Boston’s George Howell Coffee, which has secured some of lot 236, which sold to three separate parties for between $306-$500-per-kilo.

The company is taking pre-orders for $60, 4-ounce packages of the roasted coffee, described by George Howell the man as having “bold, rich flavor notes reminding me of the best natural-processed coffee” with “translucent” flavors and a “unique, truly floral, perfumed note in the aroma.”

Ninety Plus’s Brodsky and Howell will be presenting the coffee as part of a tasting and presentation taking place Saturday, Nov. 4, at the Boston Public Market.