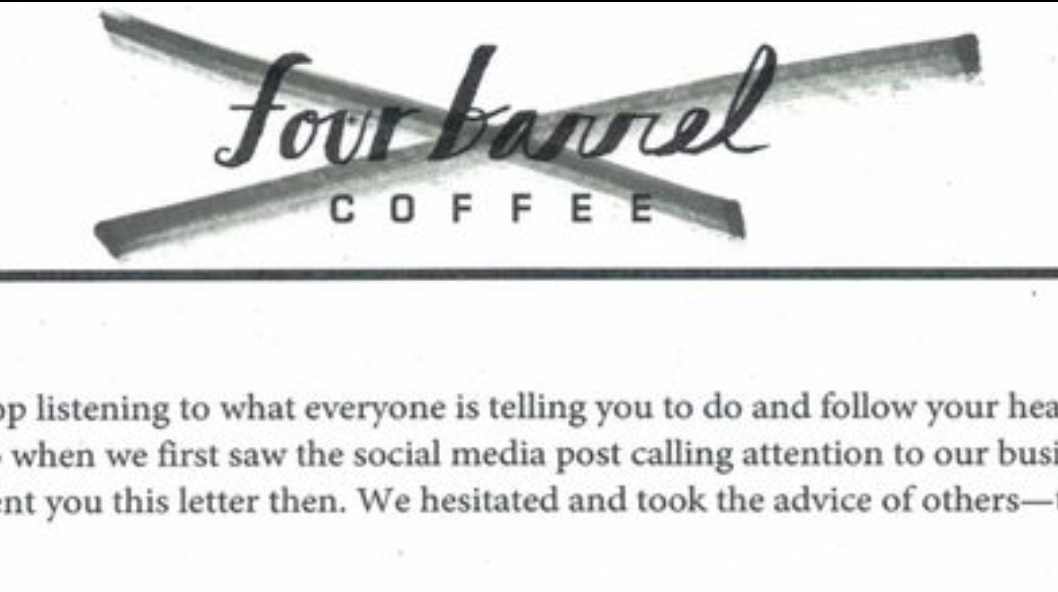 A scanned letter announcing the transition to 100 percent employee ownership posted on the Four Barrel website shows the company name crossed out.

The remaining partners in San Francisco’s Four Barrel Coffee have announced plans to offer employees an immediate 50 percent stake in the company, with the intention to transition to 100 percent employee ownership. The company is also dissolving the Four Barrel name, using the temporary moniker The Tide.

The announcement came three days after news broke that Four Barrel and its founder Jeremy Tooker were at the center of a civil suit featuring claims from eight different women alleging sexual harassment and/or abuse over a period of years at Four Barrel locations or company parties. Partners Jodi Geren and Tal Mor said Tooker has relinquished his 50 percent stake of the company, and agreed in November to walk away from the company’s operations.

Geren and Mor said they asked Tooker to leave the company after hearing about “that night in Bolinas” — a reference to a 2015 Four Barrel company party in which Tooker allegedly forcibly kissed numerous women, including one former employee Tooker pinned to a bed and tried to unclothe, according to the lawsuit.

“When we first saw what people were saying about that night in Bolinas (we were not there), we immediately asked Jeremy to resign and leave Four Barrel. That was two months ago, and today we can safely say that Four Barrel died with his departure,” Geren and Mor wrote yesterday.

The tone of yesterday’s announcement is noticeably different than that of a separate company announcement, also signed by Geren and Mor, made two days earlier. In that initial announcement, the partners said they could not comment “as fully as they would like,” that they “take issue with the claims being asserted in the lawsuit, and the mischaracterization of our current culture,” and that they “will continue to take prompt action to address any and all employee concerns, as we have done in the past.”

“We began asking ourselves the hard questions about what we could have done differently to keep our employees safe and comfortable,” the partners wrote. “How had this business that we’d so intentionally, lovingly and meticulously nurtured inflicted so much damage and caused so much pain, when we thought it was doing so much good? How had we failed to create a safe space and system for reporting sexual harassment? How had we not understood the gravity of Jeremy’s conduct? Hindsight offers a powerful and devastating lens. The responsibility for these blind spots rests squarely on our shoulders. We are heartbroken and we are sorry.”

Geren and Mor said they intend to give Tooker’s 50 percent stake of the company to employees, while also hiring a consultant to advise on rebuilding the business with an employee ownership model.

“Moving forward, as we stabilize the business as peer-owners and diversify our staff’s skills to fully manage the company, we’ll make increasing shares available from our remaining ownership, until we’ve completely divested from the business and the new entity is 100 percent employee-owned,” the partners wrote.