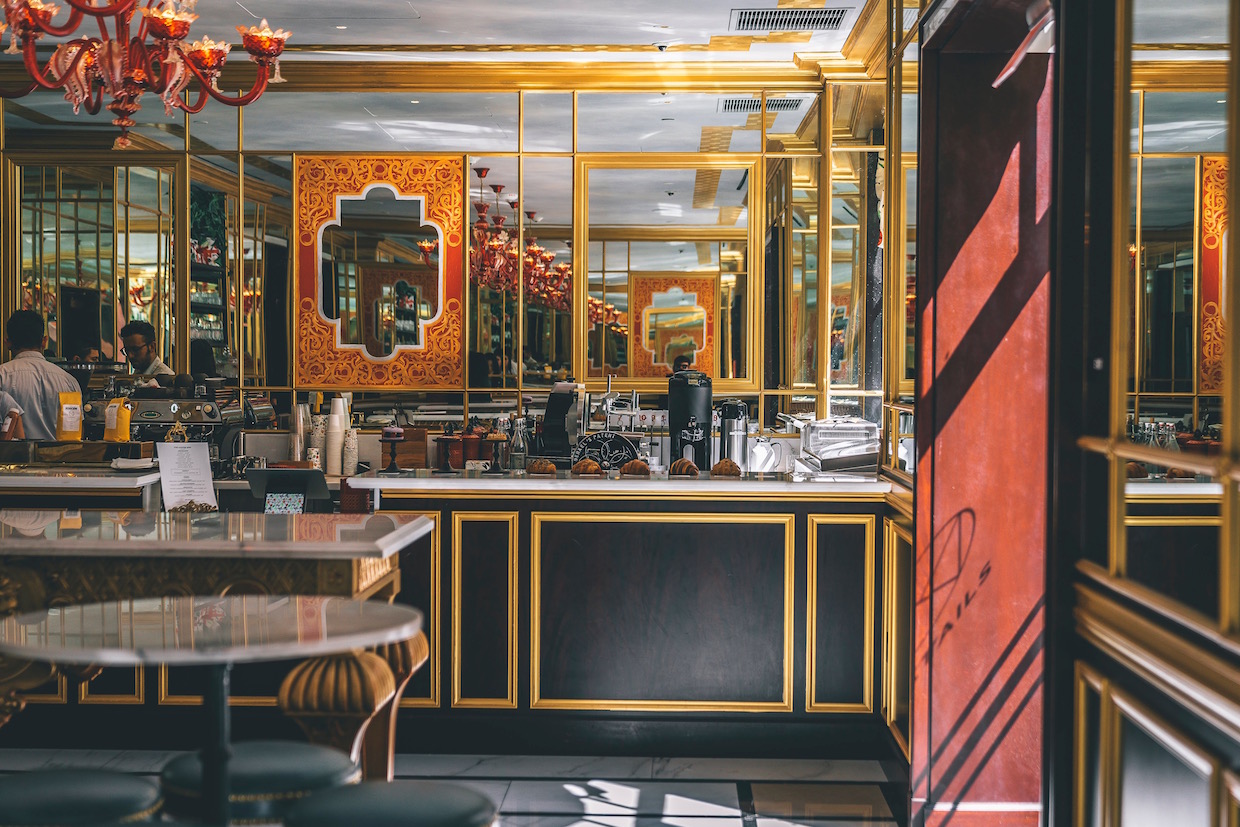 The coffee bar at the NoMad Hotel LA. Photo by Matt B. Weitz, courtesy of NoMad Hotel.

When the team behind New York’s NoMad Hotel entered the Los Angeles dining scene, they brought their famous flair for hospitality with them. They also brought their favorite local roaster.

Open for just over a month in the former Bank of Italy building at Giannini Place, NoMad LA presented one of the most hyped Los Angeles restaurant openings in recent years. The hotel also represents the largest west coast account for Devoción, the 12-year-old specialty roasting and retail company founded by Steven Sutton that works solely with Colombian coffee.

“L.A. is undoubtedly one of the most exciting places in the country for coffee right now,” J.D. Nasaw, dining manager at NoMad LA, told Daily Coffee News. “Almost every major roaster has a roasting facility here and a lot of them are downtown, not far from us. Verve, Blue Bottle and Stumptown are three of the biggest. Counter Culture has a training center in Culver City. In coming here we thought, ‘Do we work with someone locally? Or do we bring something that nobody here has ever experienced, that we have a connection to already?’ That was the decision for Devoción.”

NoMad’s New York team moved away from Intelligentsia Coffee last spring. The company had been serving Intelligentsia for years, yet as that roaster began to expand its accounts around the city, NoMad started looking for something with more niche appeal that mirrored its other food-and-drink sourcing philosophies.

To choose a new coffee collaborator, Nasaw and his team did a series of blind tastings from roasters that had a smaller presence in New York. Devoción was founded in 2006 by Sutton, a native of Medellín, Colombia, who lives most of the time in New York but keeps a base back home. Nasaw said Devoción works with farms in “red zones” that are difficult for international companies to access. The coffees are milled in Bogotá, FedExed to New York City, roasted within a week and delivered to wholesale clients or served in Devoción’s own cafe in Williamsburg, Brooklyn, according to the company. 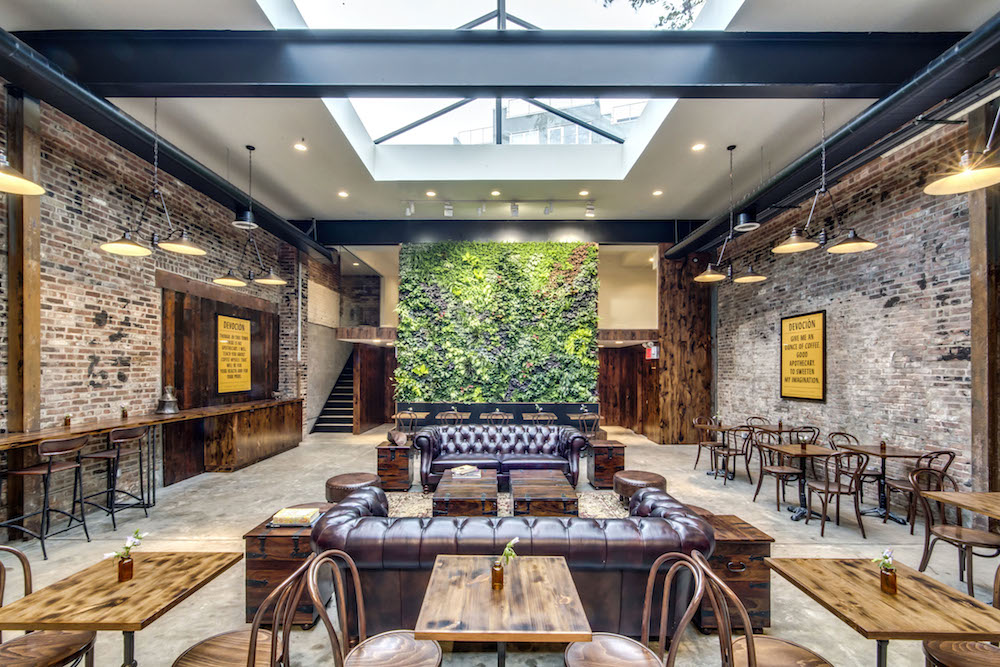 “When we were going through this transition we were scared,” Nasaw said. “Is it too limiting to source from one country? Are people going to come in wanting something Ethiopian or Guatemalan, and we won’t have that flavor profile to offer them? We want everyone to feel welcome and have something for everyone.”

Ultimately, Nasaw said his team “loved the taste of the coffee so much” that they made the leap. For its espresso, NoMad uses Honey, a blend of Yellow and Red Bourbon varieties sourced from Huila. For drip coffee and cold brew, they use Toro, Devocion’s house blend, currently sourced from three farms in Cundinamarca in central Colombia.

“With those two blends alone you get very different profiles,” Nasaw said, adding, if drinkers are skeptical, “we give people a taste of something for free to convince them the flavor is there.”

NoMad LA’s coffee menu is straightforward (Americano, espresso, cappuccino, latte) and deliberately doesn’t list everything the cafe can do. It’s important to Jeffrey Tascarella, a managing partner for NoMad LA and a founding partner in NoMad New York, that those who stop into the cafe have a range of options.

“We’re anchored in hospitality,” Tascarella told Daily Coffee News. “When you go to the best espresso shops in New York City, the coffee is excellent, but there’s always a little bit of smugness. If you don’t know exactly what a flat white is, you’re kind of a pariah.”

In Tascarella’s view, Starbucks and the like shouldn’t be the only place to get a foofy coffee drink with lots of add-ins.

“Our thing is, ‘Hey, this is the best coffee we can do.’ But if you come and say, ‘Can I have that half heavy cream and half drip and put some coconut syrup and almond milk in it,’ whatever you want, we’re going to give you the best possible version of that.” 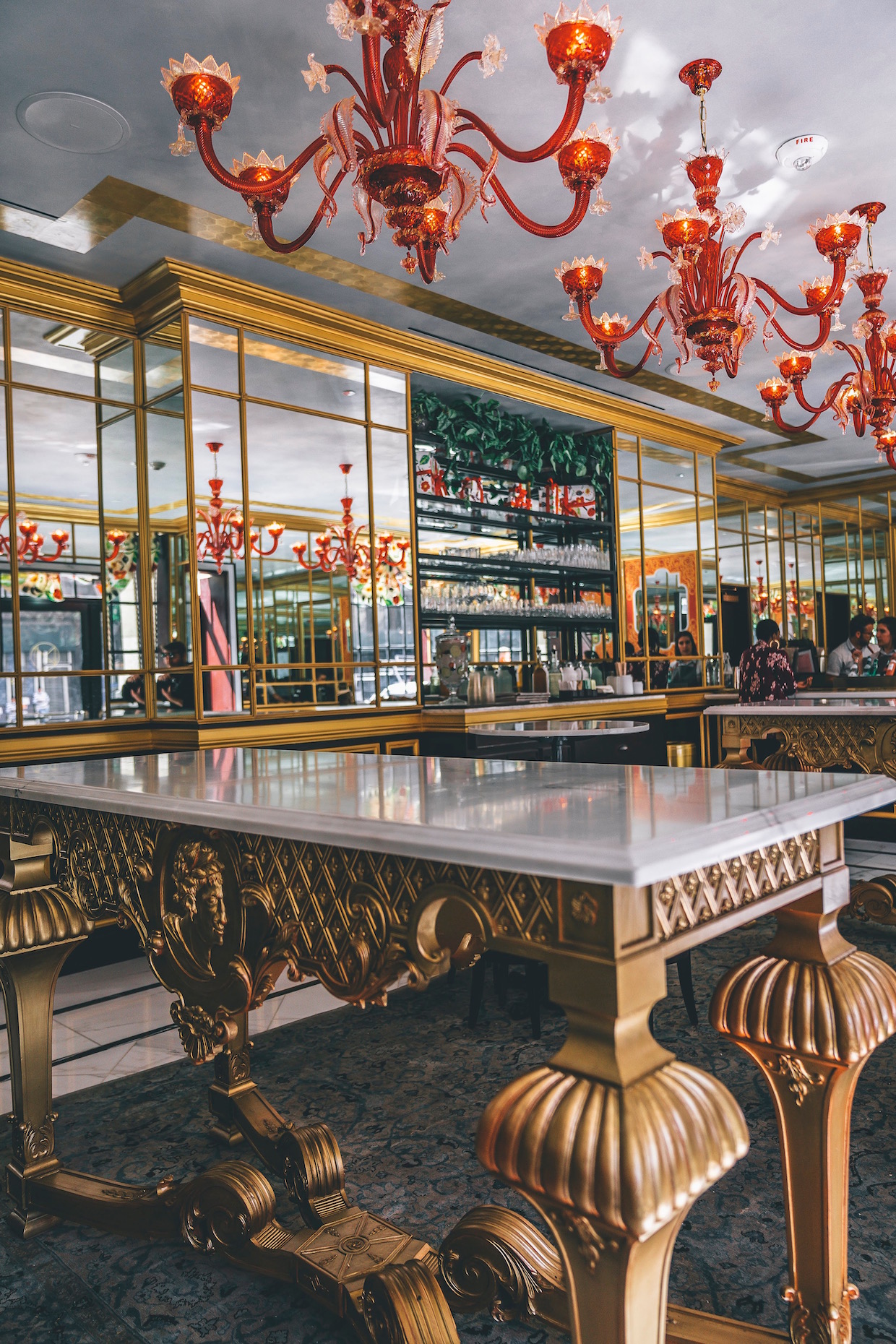 Photo by Matt B. Weitz, courtesy of NoMad Hotel.

NoMad LA’s cafe design was inspired by Cafe Florian in Venice, Tascarella said, with standing rails where diners could have “a proper espresso and a nice pastry in the morning.” At night it’s a cocktail lounge, where guests can nibble prosciutto and cheese and sip a spritz, negroni or one from a large selection of amari.

“We wanted to make this Venetian inspired coffee bar,” Tascarella said. “It’s a great place to go before a full meal or after a show, to have a little drink. It’s got a nice little life of its own outside the grandness of the rest of the NoMad Los Angeles. It’s this tiny little jewel box.”

Since the coffee bar and cocktail bar share the same space, they do influence one another, Nasaw said. A specialty coffee drink called the Matchalada takes inspiration from a piña colada, made with toasted coconut, matcha tea and cold brew coffee. A milk-based drink made with vanilla syrup and buckwheat honey echoes a dessert Eleven Madison Park has had in some variation for eight years (the latest version in LA is a milk and honey ice cream sandwich).

“Our version of hospitality is like — what’s the best experience for you as a guest? and the only way to do that is to listen before you talk,” said Nasaw. “Other places they get maybe a little caught up in what they do, what their story is. Their attitude is, ‘You come here because you like what we do, and if you don’t like that you can go somewhere else.’ Their identity comes from the strength of their message.”

At NoMad’s coffee bars, he said, the vibe is more individualized. The hotel itself may have a plush, moneyed vibe, but the cafe itself is meant to appeal to both hotel guests and nearby Angelenos.

“If this person is here just to drink an espresso and be left alone and chat with their friends, then … we’ll make it and have it be delicious,” Nasaw said. “If someone else wants to geek out, we train our staff to have those answers. Every person is accountable for understanding why we do what we do, but they’re also trained not to bring it up unless someone clearly wants to know about it. They want to read what experience people want first.”