A Transparency Coup with Junior’s Roasted Coffee, Part 2: The Story

[Editor’s Note: Part 1 of this story explored an unprecedented data collection strategy led by the roasting company Junior’s Roasted Coffee and involving all actors in the supply chain, including coffee farmer Andres Fahsen and green coffee trader TerraNegra. Through this collaboration, which notably included the farmer’s cost of production, the finished product boasted pricing data on the bag.] 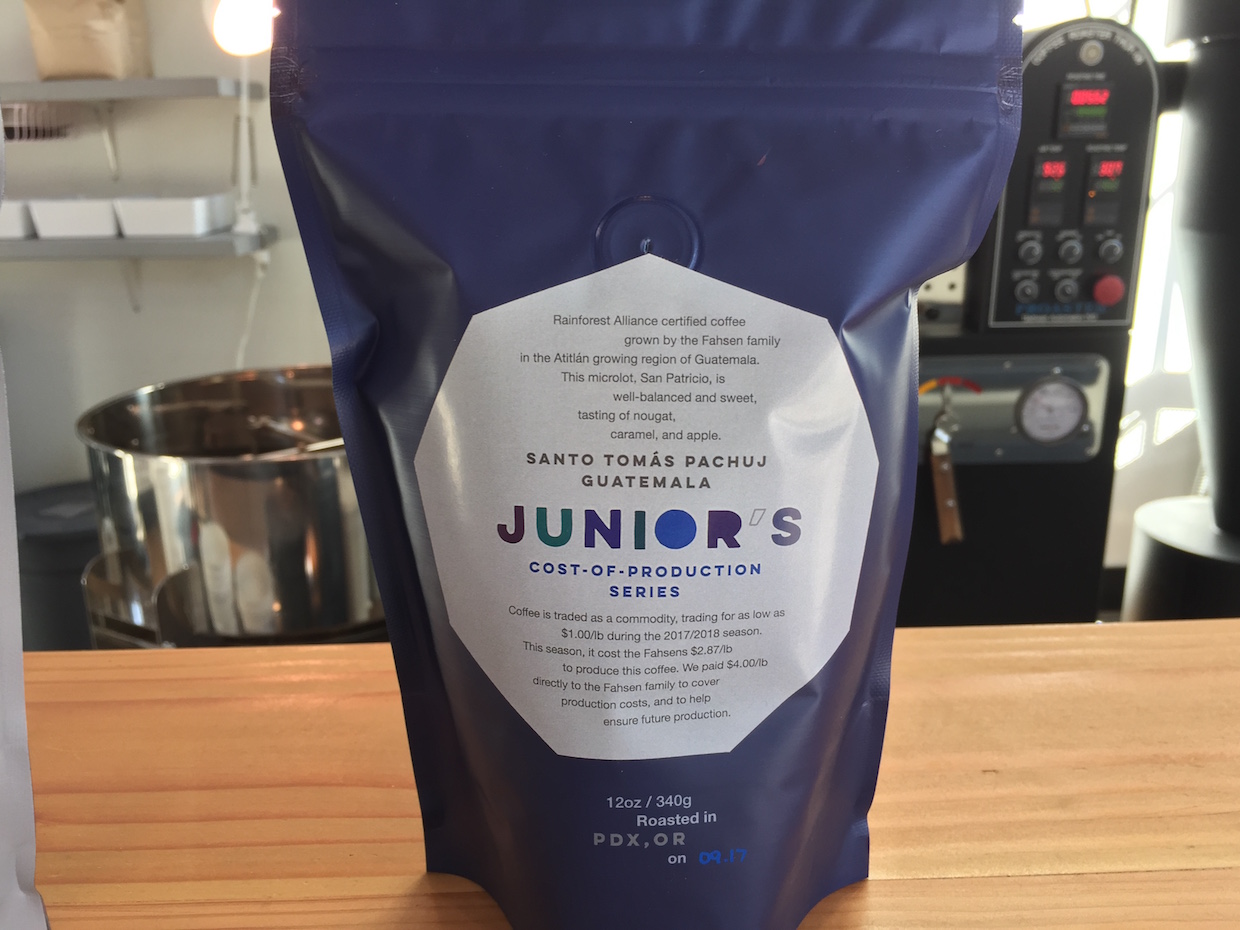 The label on the bag was only the first step.

The next step was for Junior’s Co-Founder Mike Nelson to bring JRC and Guilder cafe staff up to speed, and to train them on how to discuss the data and its conclusions with customers. At a staff retreat last month, Nelson said the cost of production project, and how to engage Guilder guests about it, was a primary focus. Now they’re onto step three: A comic book.

Nelson said the idea behind the comic book is to give guests, “something tangible, something that folks can hold and read and see.” Nelson and the team are working with local Portland punk rock/sc-fi cartoonist, writer and illustrator Jim Kettner for the project. The comic book will be available in the cafe and potentially elsewhere, breaking down the topic of the relationship (or lack thereof) between the c-market and the costs of production in an approachable medium.

Nelson suggested one important but often overlooked detail to remember is that most farmers, even those with access to the specialty market, are still also subject to dealing with the C market either directly for their lower-scoring coffees or via prices that are reflective of the C. This is despite the fact that, as farm partner Andres Fahsen said, “The prices of the C market don’t reflect anything close to what specialty coffee costs to be produced, and even worse, it doesn’t even consider a profit like any traditional business to be sustainable.” 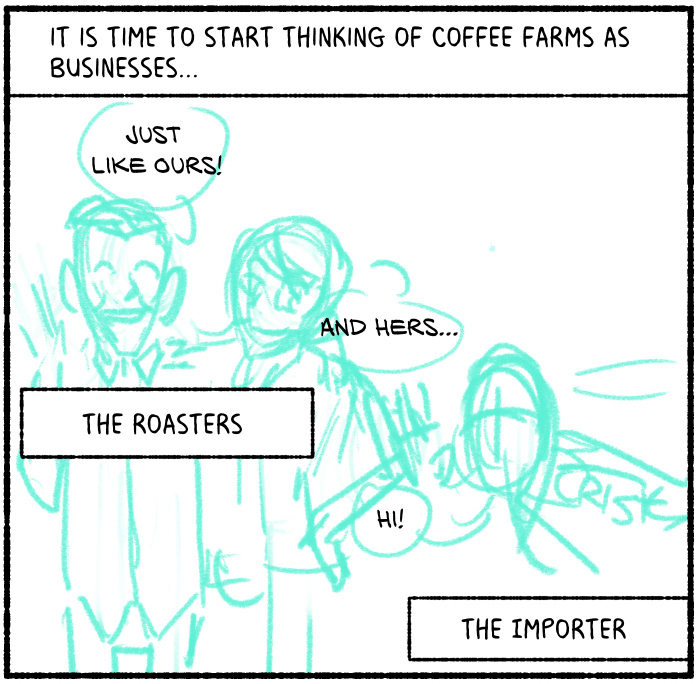 As Junior’s is a small and young company, its purchase this year only amounted to roughly 3,000 pounds out of the approximate 160,000 pounds produced annually by Fahsen’s farm Santo Tomás Pachuj, according to Nelson. While the farm of course seeks specialty markets for all its coffees, it is not immune from the realities of market volatility and, like virtually every coffee farm, bears a heavy burden of risk from year to year. With this in mind, Nelson said Junior’s has made at least verbal commitments related to purchasing equal or greater volume in future years.

“We will be building a contract as we get into the next harvest,” said Nelson. “We have only been open 16 months and didn’t really know what to expect the first year. Just when we think we know how long it takes us to get through a bag of coffee, we get busier at the cafe or pick up a new wholesale partner.”

Nelson said that regardless of whether the coffee next year scores as well as it did this year, he intends to continue working with Fahsen on the project of finding and highlighting costs of production, which has only just begun.

“We can dive so much deeper,” said Nelson, who does aspire to defray and ultimately share in the risk to the extent that Junior’s is able. “Working with producers through the good years and bad makes sense for the project, but we also see it as a more sustainable way to buy coffee. It would be easy to say there’s not much risk because it’s only 20 bags, but as a small business owner I’d say that predictability is vital.”

Nelson’s overarching goal is also to continue cultivating cost-of-production-clarified products so that in time the majority, if not all, of Junior’s coffees are equally transparent and just. He has one or two more potential coffees in the works right now, the next of which will be from Brazil. 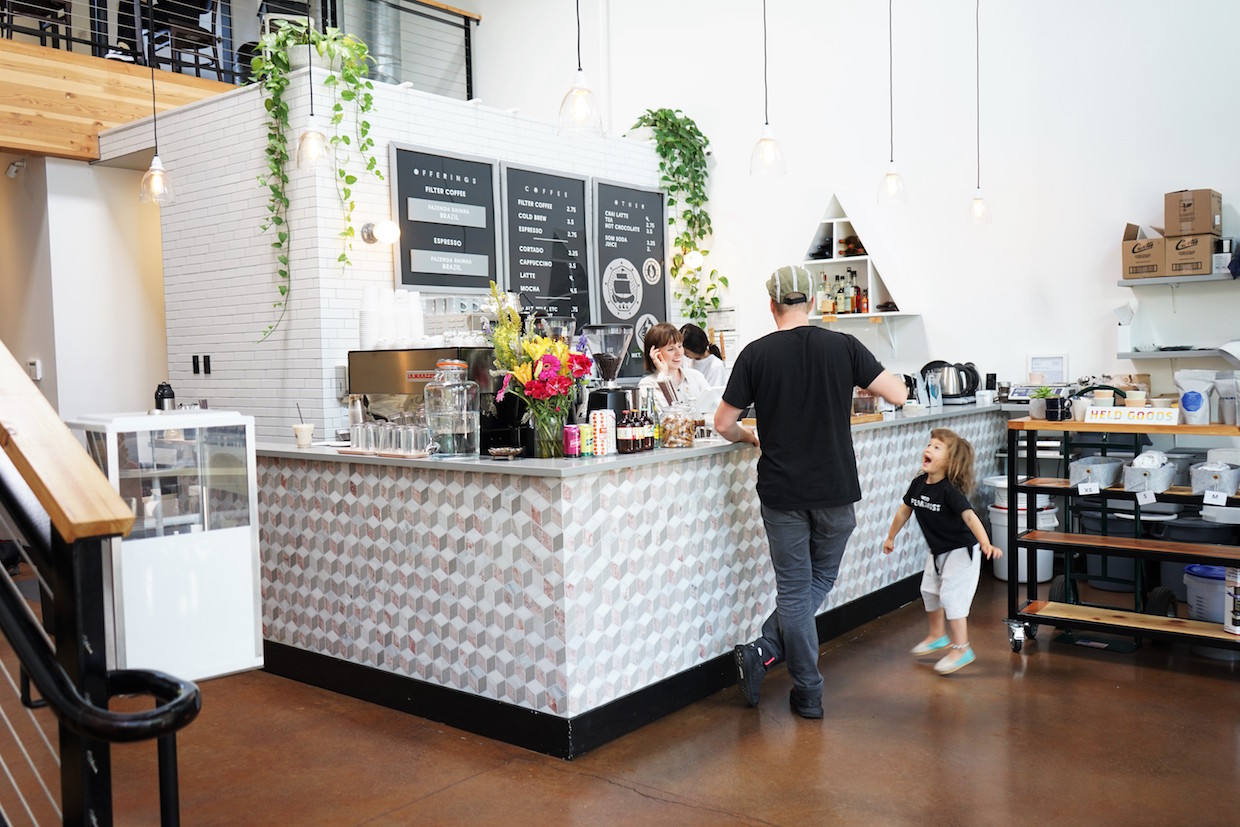 “This will open up a conversation with our guests, our customers, about Brazil, and how Brazil influences the market with its low prices,” said Nelson, attributing the phenomenon to a slippery combination of government support, the stock exchange, volume and some highly efficient practices on farms. “For many coffee producers that I talk with, they all see Brazil as the villain. Everyone compares their coffee to Brazil — ‘We harvest ripe cherries, Brazil doesn’t’ — and they blame Brazil for keeping prices low. So I want to start this next project to get this conversation going for consumers and even other folks in the industry.”

JRC is also organizing a public talk about cost of production to be held this Nov. 27 at Buckman Coffee Factory in Portland, where Nelson also regularly serves as an educator.

“I see this as a beginning,” Nelson said. “It’s very much the kind of conversation we need to be having in the industry right now. Because really, you’re talking about something that is so uncomfortable — that’s kind of the scary reality of this historically exploitative trade, our current consumption habits, and a lot of hidden costs. Communicating this with consumers is a tightrope because on the one hand, you can’t scare people away and guilt trip them. On the other hand, you’ve got empower people and let people know that their buying decisions do matter.”