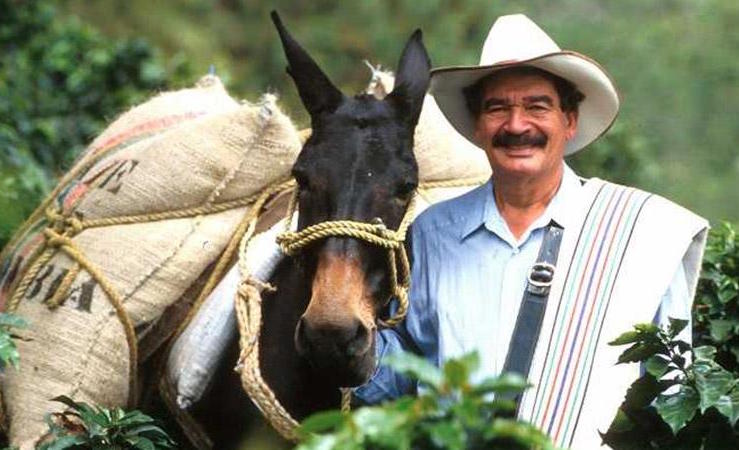 The coffee farmer who for more than three decades embodied the heart and soul of Colombian coffee with his portrayal of Juan Valdez, Carlos Sánchez Jaramillo of Medellín, has died at age 83.

Coffee leaders throughout Colombia have been lamenting last week’s passing of Sánchez, who has been widely characterized as a humble and passionate man who embraced the spirit of Colombian coffee through his decades of service to Colombia’s National Federation of Coffee Growers (FNC).

FNC CEO Roberto Vélez Vallejo tweeted (translated from Spanish): “Carlos Sánchez left us. All his life he proudly portrayed the character of Juan Valdez around the world. A tribute to his memory and an eternal gratitude from the coffee growers of Colombia for his devotion and hard work in favor of Colombian producers.”

The FNC introduced the fictional character of Juan Valdez, a Colombian coffee farmer who often appears with his mule Conchita, in 1958. Sánchez replaced the original Juan Valdez actor, José Duval, in 1969, occupying the role in print and on screen from 1969 until his retirement in 2006. The character, now played by Carlos Castañeda, is used to convey a sense of pride related to the distinct quality of Colombian-grown coffees.

During Sánchez’s tenure, Juan Valdez also blossomed as a brand. Through the FNC’s producer and roaster network, Juan Valdez roasted coffees are now available for purchase throughout the world, while there are more than 230 Juan Valdez brand cafes in Colombia, along with more than 120 international locations, primarily in Spanish-speaking countries.

Although it seems quaint now — and the voiceover here is a disservice — this 1982 Juan Valdez ad is one of many featuring Sánchez that may have come well ahead of its time. Consider the messages regarding direct trade and the focus on production processes aimed directly at audiences in the United States:

The editorial board at Colombia’s El Tiempo offered a sincere thanks to Sánchez for his work on behalf of the nation’s coffee growers, saying, in part:

But today, when embarking on his last trip, we must emphasize that the character he played, with his attire of aguadeño hat, carriel and cotizas, was an invaluable effort as a global symbol of the grain, representing half a million coffee growers.

That may be one of the tangible signs of the success of a message of authenticity, because it transmitted the origin and the process of our then flagship product and, in turn, proudly personified, in thousands of scenarios, the farmer dedicated to that work.