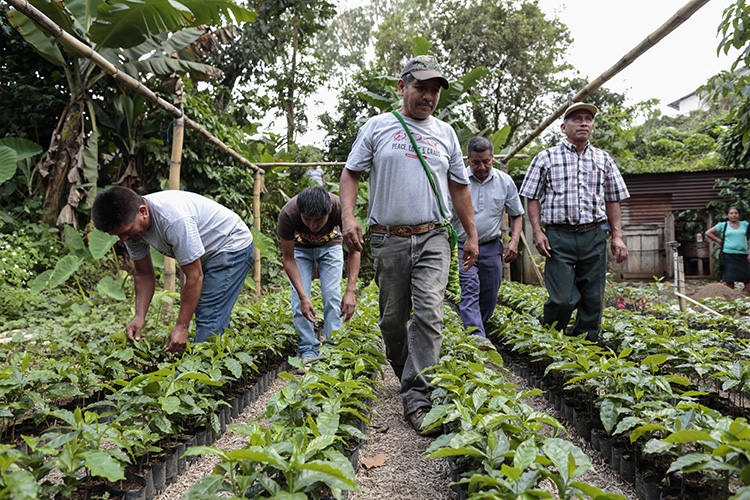 This Guatemalan coffee nursery represents a small part of the labor, cost and risk farmers face when deciding to invest in their coffee farms. Photo by Oscar Leiva/Silverlight for CRS

The drivers of migration remain the usual suspects: climate change, debt, prices, and, in some parts of the Northern Triangle, violence. But the pressure of these forces is increasing, and it is hard to ignore their compounding nature when you are dealing with them all at once. The hard numbers as well as numerous qualitative features seem to bear out the hypothesis that the pressure on Central America’s coffee farmers is growing.

For those who were following the news prior to the November midterm elections in the United States, you probably came across the story of the migrant caravan a few times during your daily reading, and another one left Honduras in January. Although these caravans are not uncommon, the size of the one in the fall caught some people by surprise. What caught my field team by surprise was that  before the caravan, and right around the time the C-Price dropped below a $1 per pound, we started to hear from our staff about a slow exodus of program participants, family members, and friends or acquaintances in the region, making the journey North. Although the price has recovered a bit, as recently as last week, farmers in Zacapa and Chiquimula were still only receiving $0.75 per pound for parchment at farmgate. 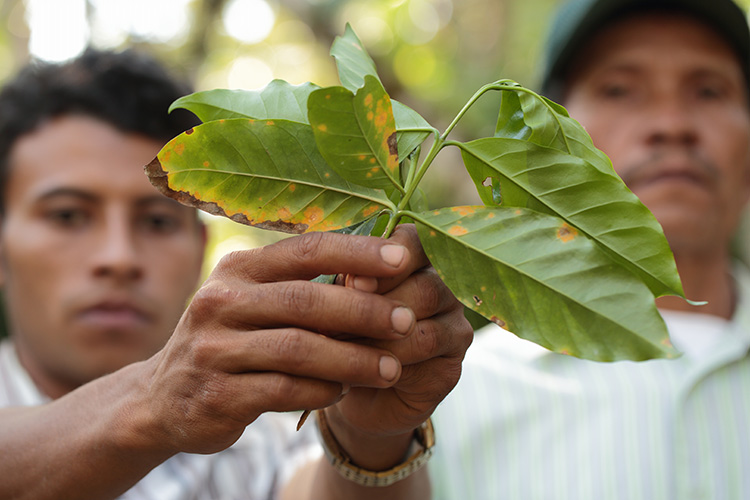 As press coverage continued to grow, our field team began to investigate what was driving these seemingly sudden decisions to migrate. What we ascertained was threefold:

Decisions to migrate are multi-year decisions. It’s not all about the price and it doesn’t happen overnight — this gets at the complexity of building a sustainable industry or value chain. Migrating to the U.S. is expensive and dangerous. It entails leaving your loved ones behind and not knowing when you might see them again. There tends to be a compounding of factors — coffee leaf rust, drought, prices — that lead to a farmer making this decision. Literature on the economics of migration explore the complexity of this decision-making process.

Coffee farmers are carrying more debt than other farmers. Coffee farmers in CRS programs tend to be more dependent on one source of income. For instance, our grain farmers often have well-developed internal migration networks and rely on non-agriculture income sources, as well. This means that coffee farmers are more vulnerable to the ups and downs of production and market prices.

To complicate matters, coffee farmers are heavily reliant on credit to make their operations work. They often rely on credit, and some savings, for eight to nine months out of the year until payday during the coffee harvest. In a context in which there is generally no insurance or no sophisticated price-risk-management tools, farmers can be in dire straits when prices drop over the course of the year, after they have already committed their harvest in exchange for a credit advance.

A farmer recently told us that when price signals reached him before the harvest, he knew he only had one option: migrate. He called the decision “re-capitalization.” He would go to the U.S. to build up some capital, pay off debts, and maybe invest in his farm again. In an average year, our coffee farmers carry a debt-to-income ratio of about 50 percent. In recent years, that number has climbed higher with the additional debt, and opportunity cost, of farm renovation.

For example, I spoke with a farmer named Fernando yesterday whose debt-to-income ratio had risen to 75 percent. He said he generally owes about half of his harvest to the intermediary who bankrolls him nine months out of the year. However, due to the low price of coffee, he owes much more this year. He figures he will end up putting about $600 in his pocket after annual debts are taken care of. That will last his family until about April.

The coffee leaf rust outbreak of 2012-13 decimated farms, leading to production drops of 20 percent across the region, and the loss of 100s of millions of dollars of revenue, including half a billion just in Guatemala. There hasn’t been a severe outbreak since, but given coffee’s perennial nature, farmers are still dealing with the consequences of the outbreak.

Many farmers made a bet on coffee and began to renovate their farms from 2014-16. They were just seeing those plants come online last year and this year. There was optimism, but this price drop came at the worst possible time for farmers just returning to pre-2012 production levels. During the months of July and August 2018, farmers who were receiving early word of what prices would look like this harvest (November-February) feared they would be left once again in the red.

In my next post, I’ll dig into our project’s cost of production numbers to see what they look like at the farm level. I will do some analysis of the numbers and compare them to another tree crop (macadamia), using tools such as the Land Equivalency Ratio and gross margin analysis. Afterwards I will hypothesize about what they might mean for farmer profitability and decision making.