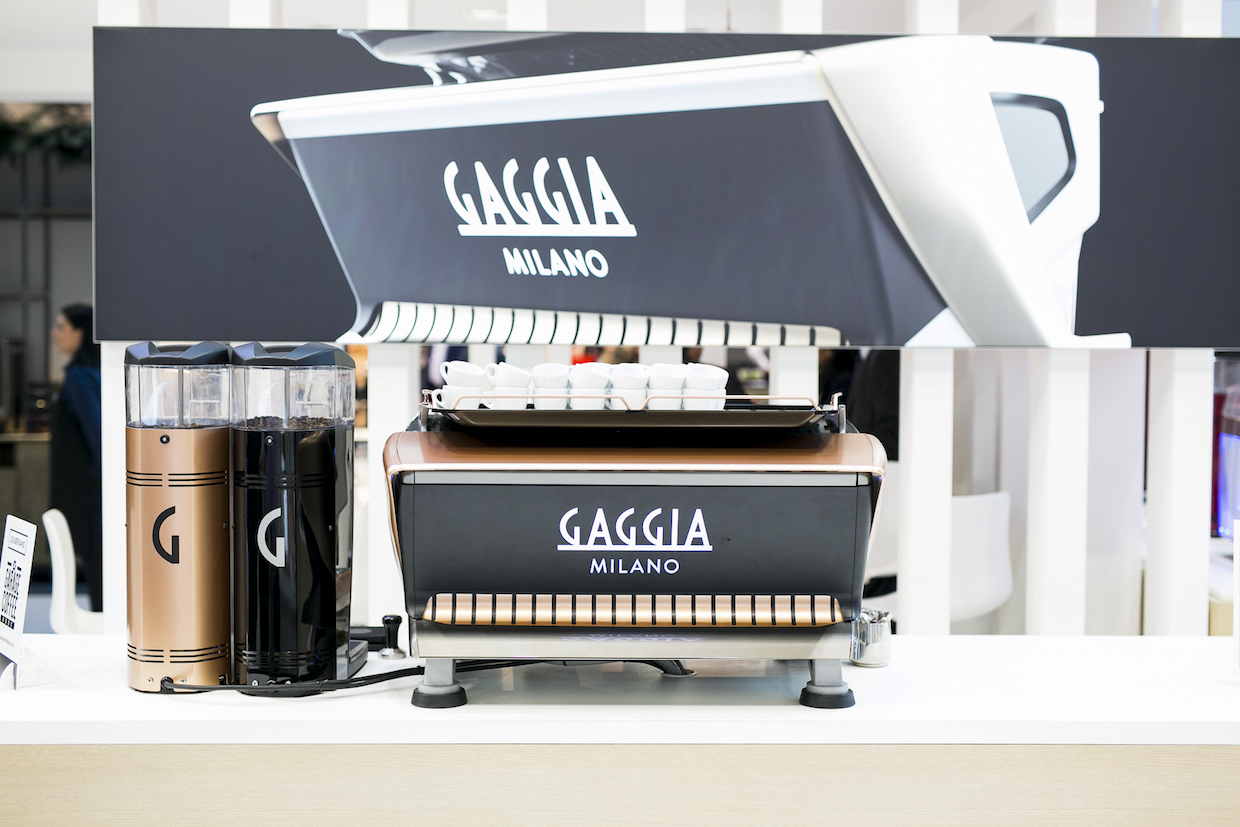 Evoca Group unveiled the new look for its historic Gaggia brand at the recent MICE show in Australia. All photos courtesy of Evoca Group.

Coffee equipment conglomerate Evoca Group is ringing in the 80th anniversary of the patent filed by Achille Gaggia, founder of the classic brand Gaggia Milano. Evoca acquired the brand license roughly two years ago, and has just rolled out a line of machines intended to spring the iconic Italian brand back to stylish, functional relevance in a new era of technology and consumption.

Evoca collaborated with the Bonetto Design Center to develop the look of the new machines, emphasizing the classic brand’s clean lines and hallmark metallic shine, brought up to date with modern shaping and innovative use of LED lighting. The first 100 units of the new line’s high-tech flagship, La Reale, will be issued as a numbered edition to mark what the company hopes is an historic turning point in the ongoing saga of an industry icon. 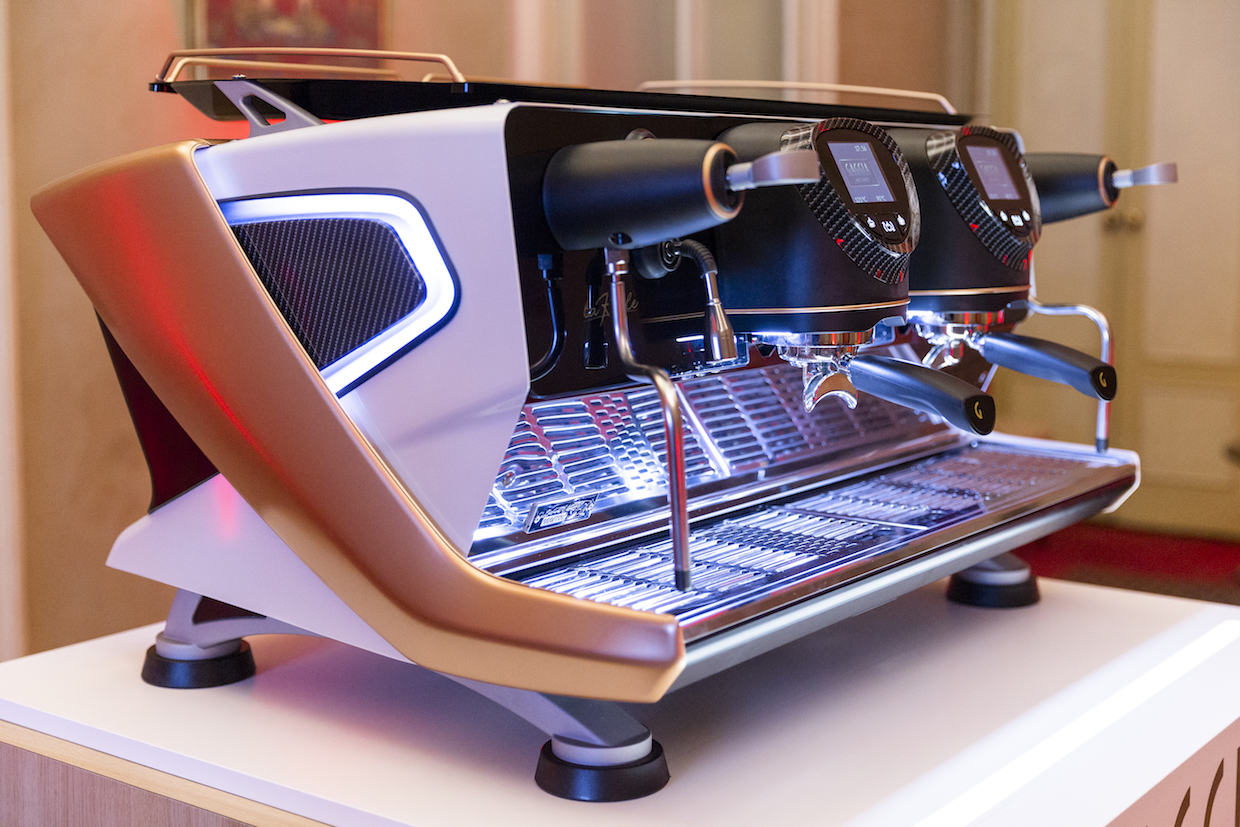 Beneath the strong lines and sturdy-looking exterior that both reflects and generates light, a multi-boiler system provides steady individual temperatures for each group while maintaining high steam performance, according to the company.

Baristas manage each group using what the company calls a “dual interface,” including a 3.5-inch touchscreen for setting independent parameters, with three physical buttons underneath for quick execution.

“The touchscreen is used for the programming of brewing temperature, pressure profiling, fast cleaning of the groups, while the physical buttons allow the barista to make selections in a fast way,” Evoca HoReCa Marketing Manager Lucio Gotti told Daily Coffee News. 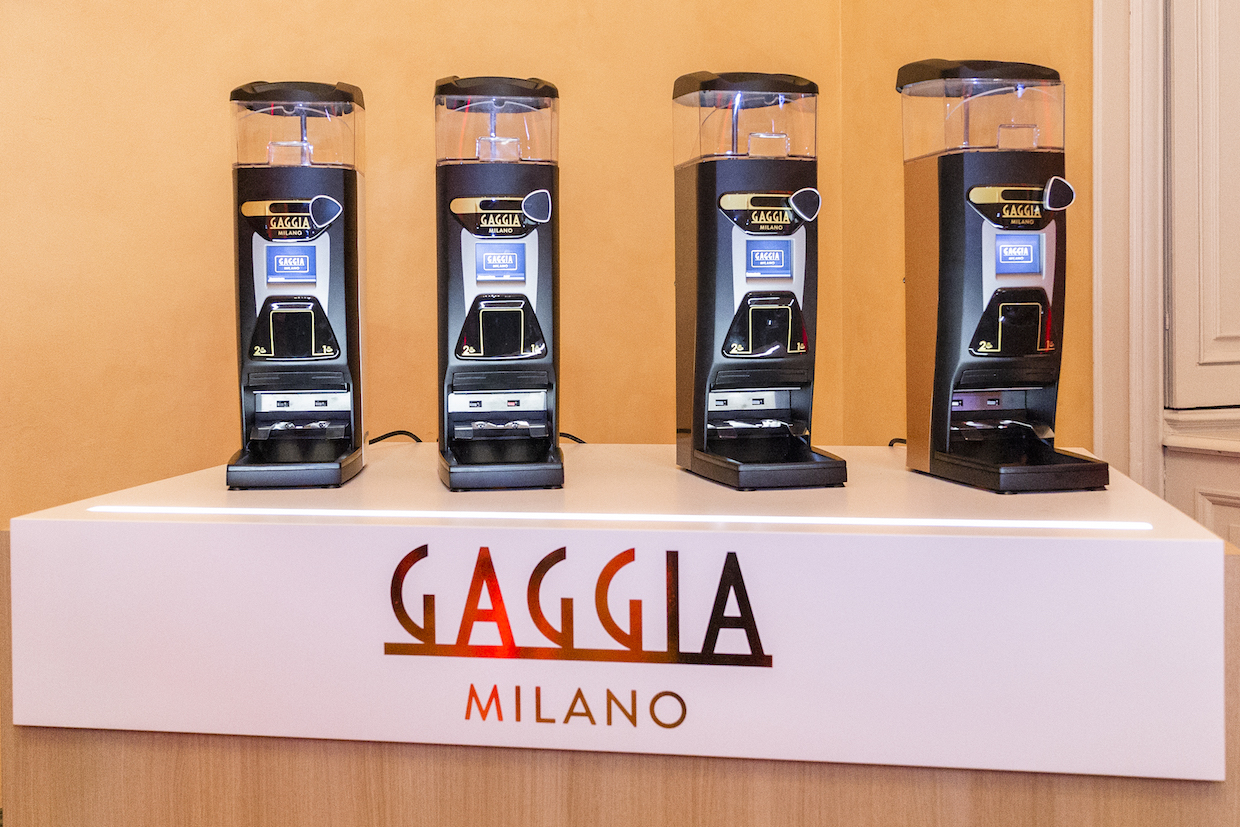 Gaggia s.p.a. was originally registered in 1948 in Milan by Achille Gaggia who, according to Gaggia USA, had for 10 years already been promoting his invention of a coffee maker that brews using the force of hot water instead of steam. Gaggia’s patent, No. 365726, was filed in Italy 1938, and is credited with ushering in the era of modern espresso as it essentially continues to be enjoyed today.

In 1949, the company’s first commercial machine, the Gaggia Classic, was released. Three years later Gaggia released the Gilda, which the company says was the first espresso machine designed for home use. Over time, the brand’s focus shifted more into the consumer market, leading eventually to numerous acquisitions and changes of ownership under the hands of larger appliance manufacturing companies. 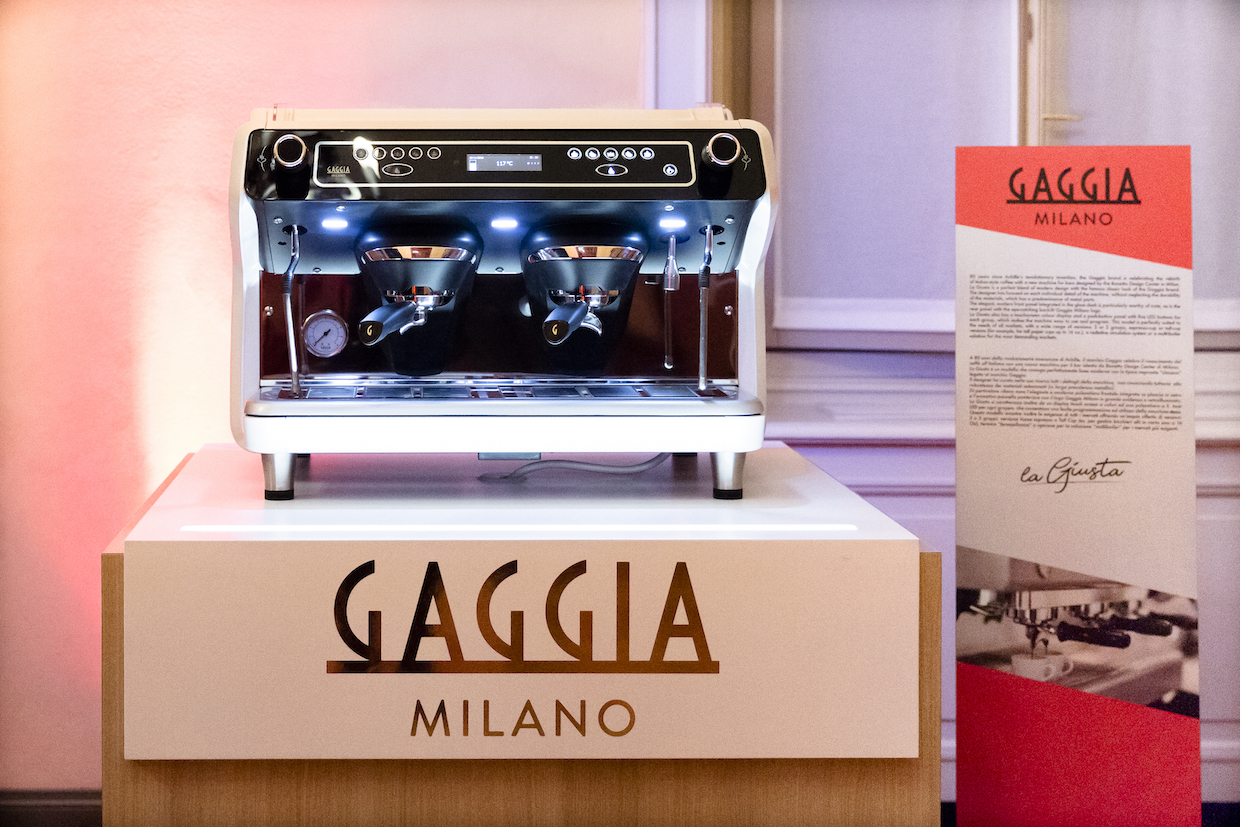 Today, the Gaggia Milano professional equipment business is part of the Evoca Group, while the consumer machine brand is managed by Philips. These will remain separate businesses, according to Gotti. From the public perspective, though, Evoca’s relaunch of Gaggia Milano in the professional sphere does mark a return to form for the brand.

At an event held in December at Palazzo Bovara in Milan, Evoca publicly presented the line of three new Gaggia-branded commercial espresso machines, including La Reale, which launched for sale last month. Also in the lineup is a wifi-connected super-automatic called La Radiosa sends faults, statistics and sales data and allows users to change parameters remotely via the internet, and the straightforward auto-volumetric workhorse La Giusta. The latter two will be released in the second part of the year. 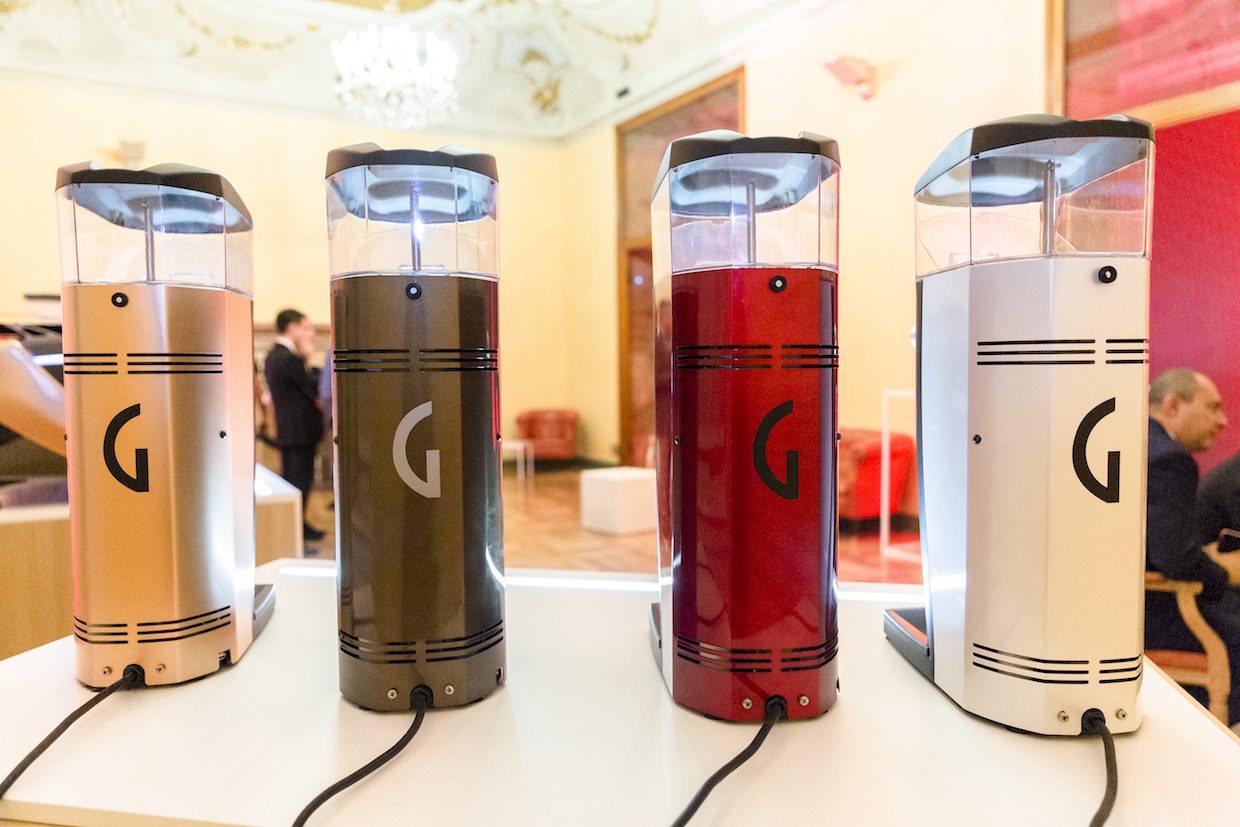 New Gaggia Milano machines were most recently on display at the Evoca Group booth at the 2019 Melbourne International Coffee Expo (MICE) earlier this month.  Gotti said Evoca will next display the line at the Host exhibition in October in Milan.

Said Gotti, “The ambitious target is to become one of the most prestigious brands in the professional coffee machine business in both categories: traditional and fully auto.” 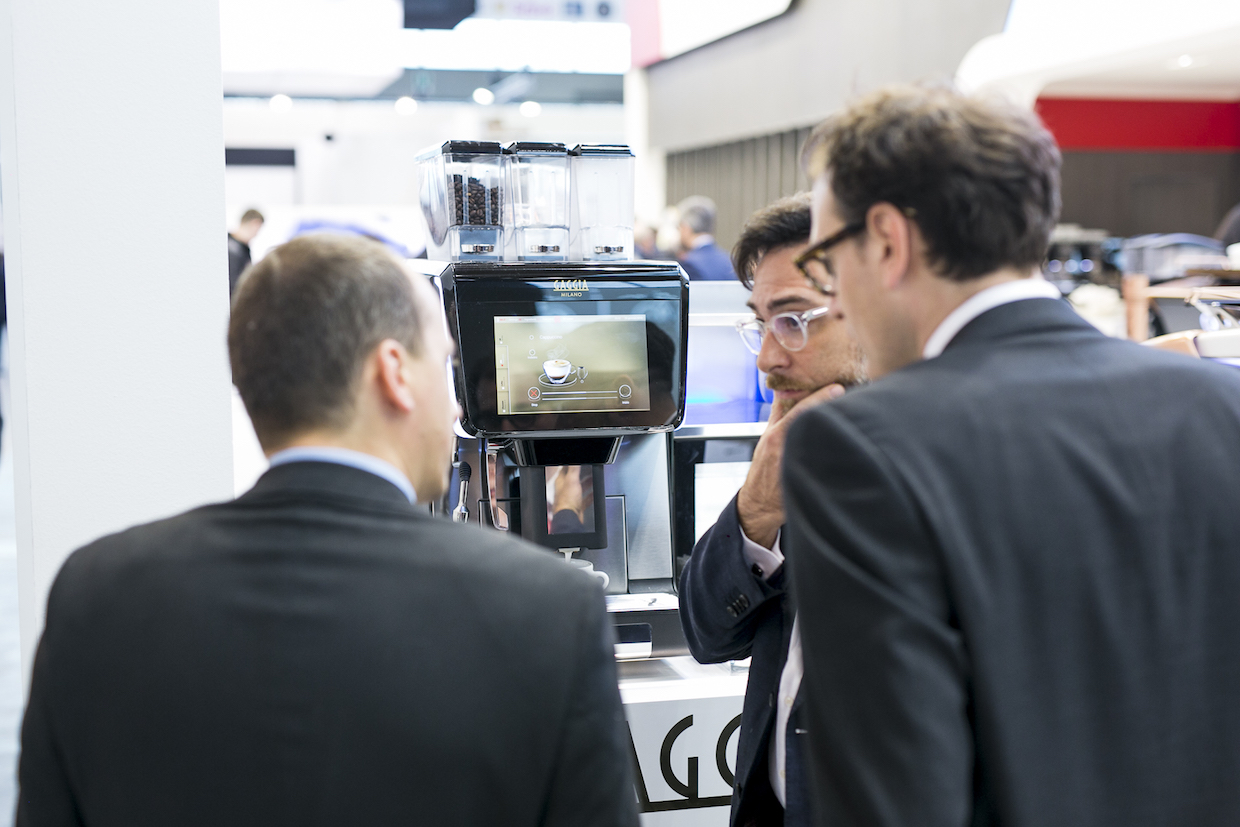