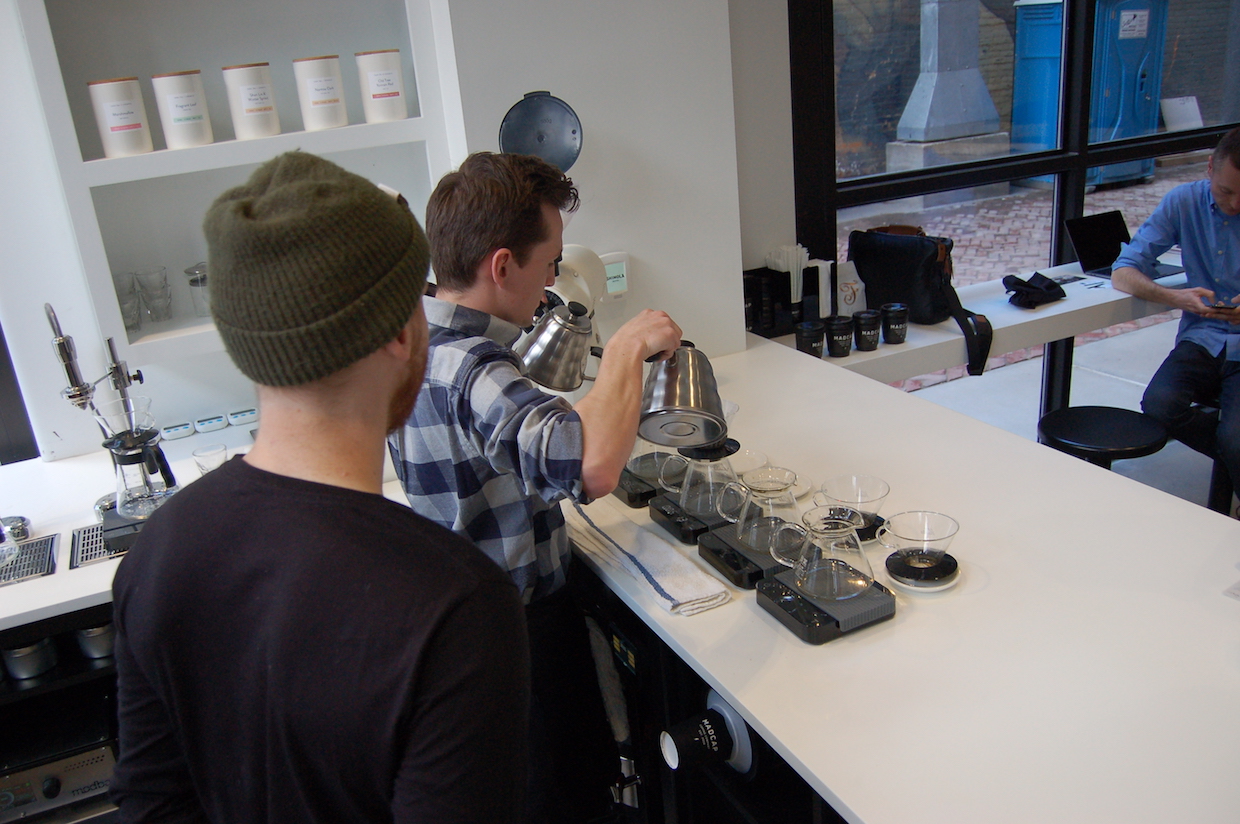 The 900-square-foot shop in Downtown Detroit is the fourth retail location for the 11-year-old roasting company to date — and its smallest. Trevor Corlett, who co-founded Madcap back in 2008 along with Director of Coffee Ryan Knapp, told DCN that he’s been interested in establishing a retail presence in Detroit for nearly nine years. It wasn’t until 2017, when Madcap featured a pop-up cafe at Detroit’s Holiday Market, that the company made a firm commitment towards opening a brick-and-mortar location in the city. 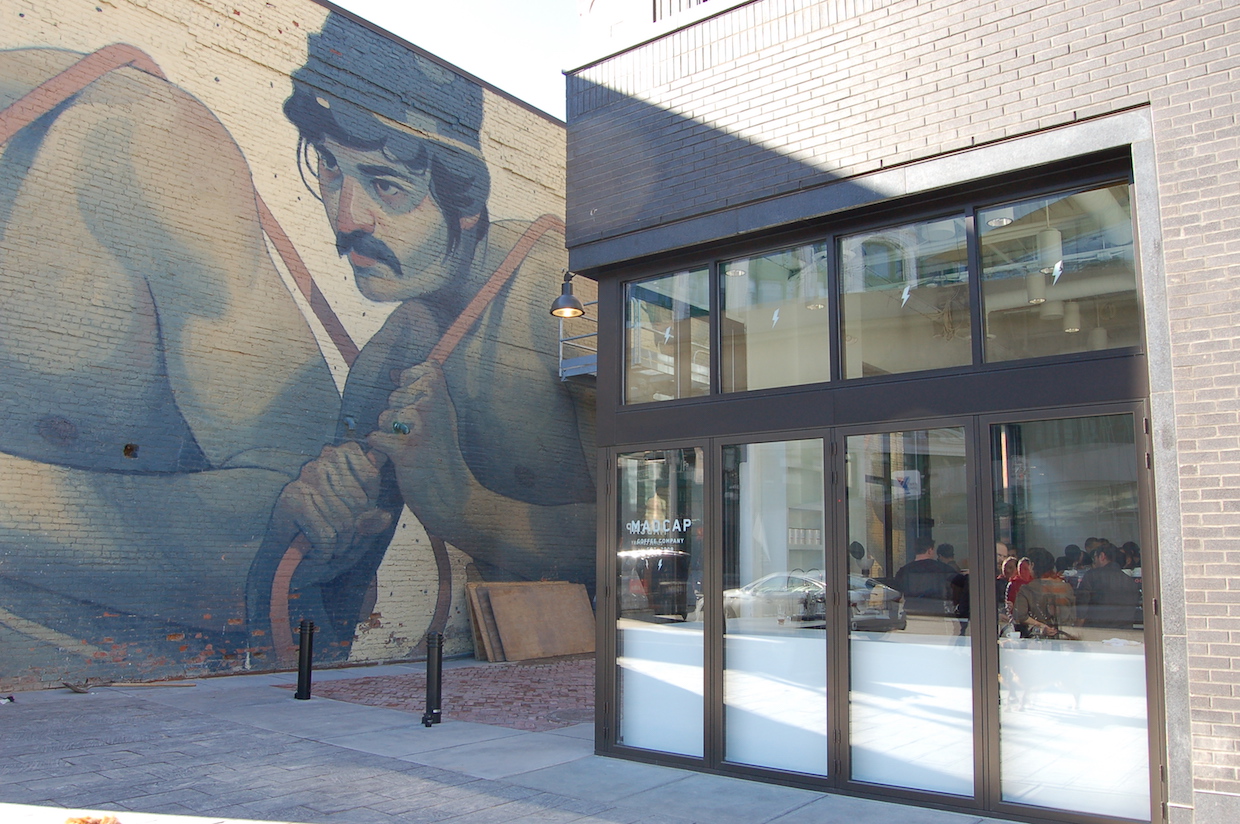 “The pop-up lasted five weeks long and it was a huge challenge for our company,” Corlett said. “We rented an Airbnb for our staff and everyone worked so hard — but we saw a ton of success.”

The Madcap team is hoping to build upon that success within its minimal, airy and elegantly designed new space. Corlett said he worked with Madcap’s long-time design collaborator Seth Herman, who is in part responsible not only for Madcap’s Grand Rapids cafes, but also for its signature lightning bolt logo. 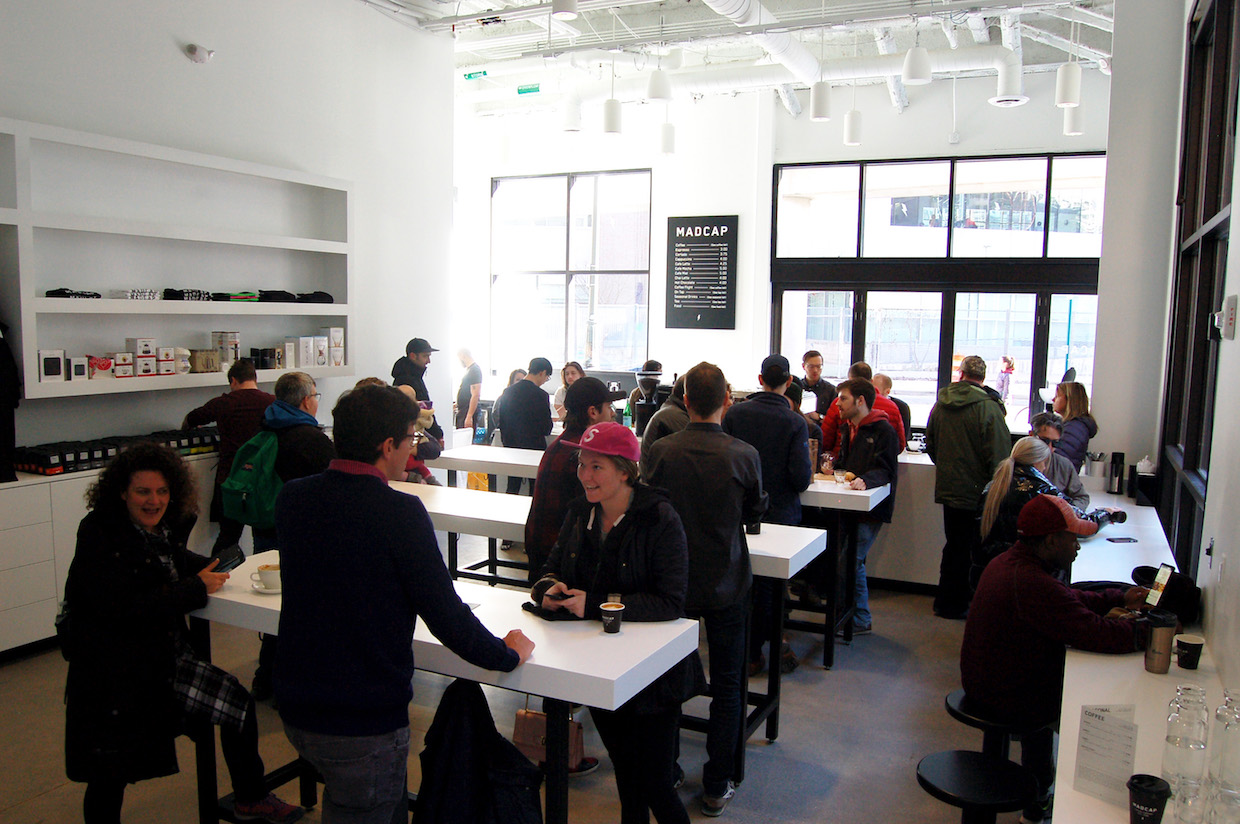 Despite being surrounded by multi-story buildings, the cafe space is flooded with natural light through tall windows lining the east and south walls, with each window being able to retract in the summer. An expansive counter space is designed to allow baristas to serve walk-up customers when the windows are open. 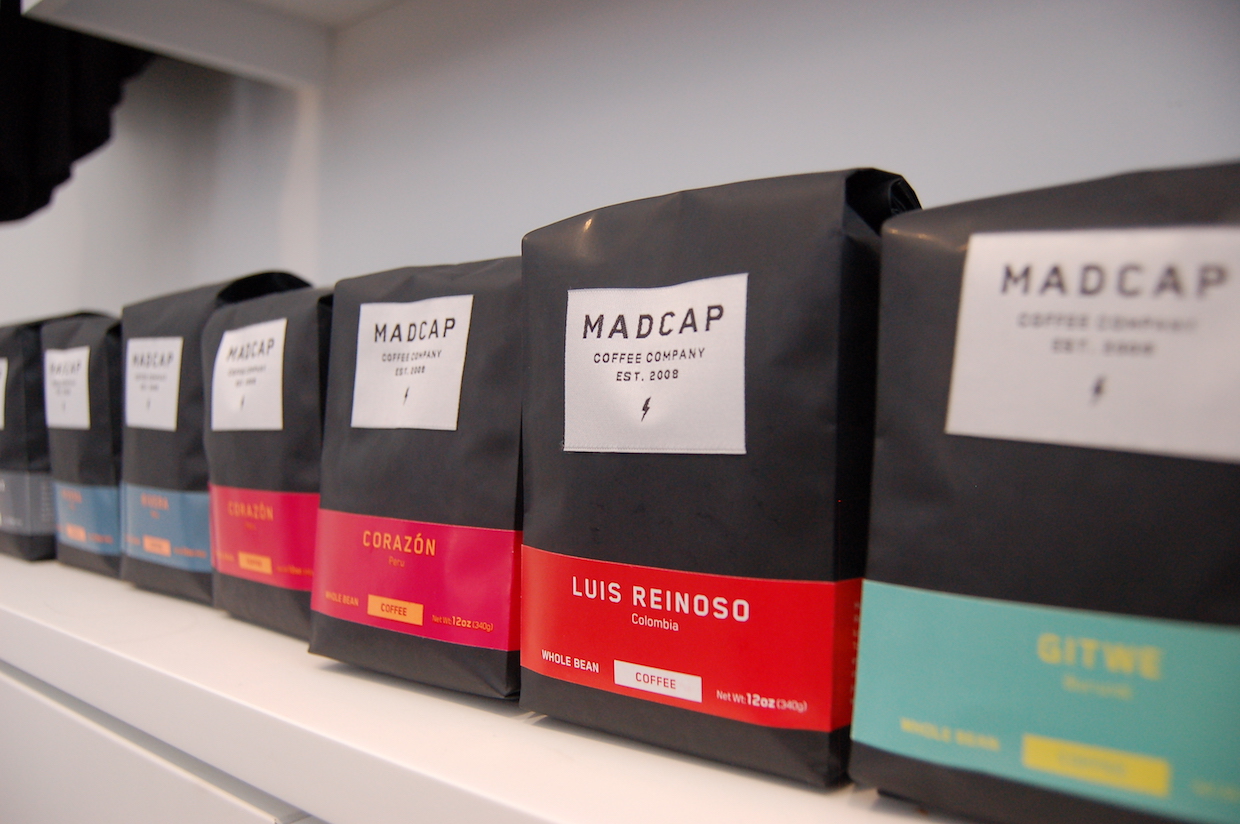 Staff for the new location began training in October of 2018, spending a few weeks in Grand Rapids becoming familiar with the brand, attending mandatory coffee tastings, and learning barista skills. The company is also leading trainings for Shinola Hotel staff for coffee service.

Coffees roasted in Grand Rapids and transported weekly to Detroit will make up a rotating menu of single-origin pourovers and single-origin espressos, as well as a seasonal menu of staff-devised concoctions. 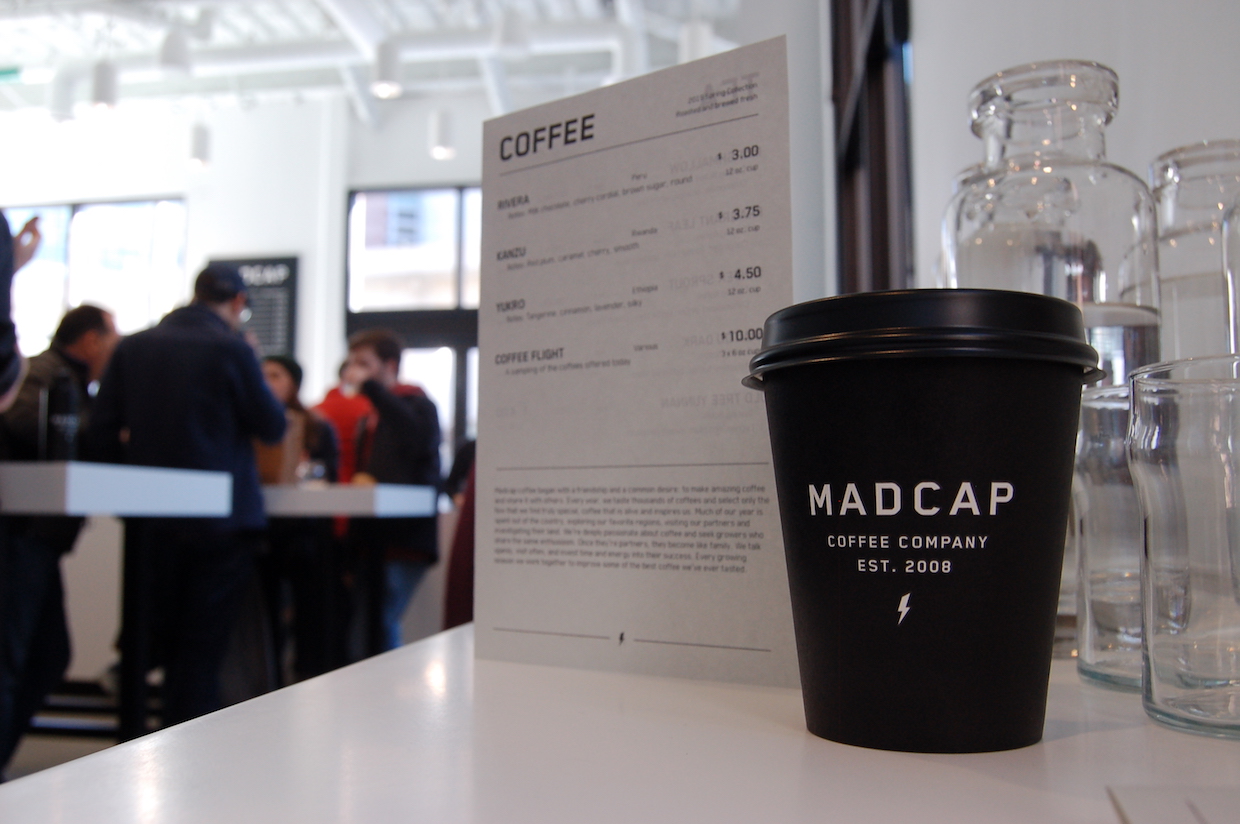 A La Marzococo Linea 3-group espresso machine lives atop the bar next to Nuova Simonelli Mythos 2 and Mahlkonig Peak grinders for espresso. A Mahlkonig EK43 grinder and Kalita Waves are being used for individual pourovers, with a Modbar system for larger pourover orders. Batch brew is also offered, along with cold brew, and nitro infused tea. Madcap has also unveiled a new blend called the Detroit 313, referencing the city’s area code.

Madcap has maintained a reputation for offering exceptional customer service, and Corlett mentioned numerous times that extending those qualities to Detroit is one of the most important challenges in the long-distance move. In addition to traditional training, he said the company may invest in staff activities such as dairy farm visits, vineyard visits, and other special tastings. 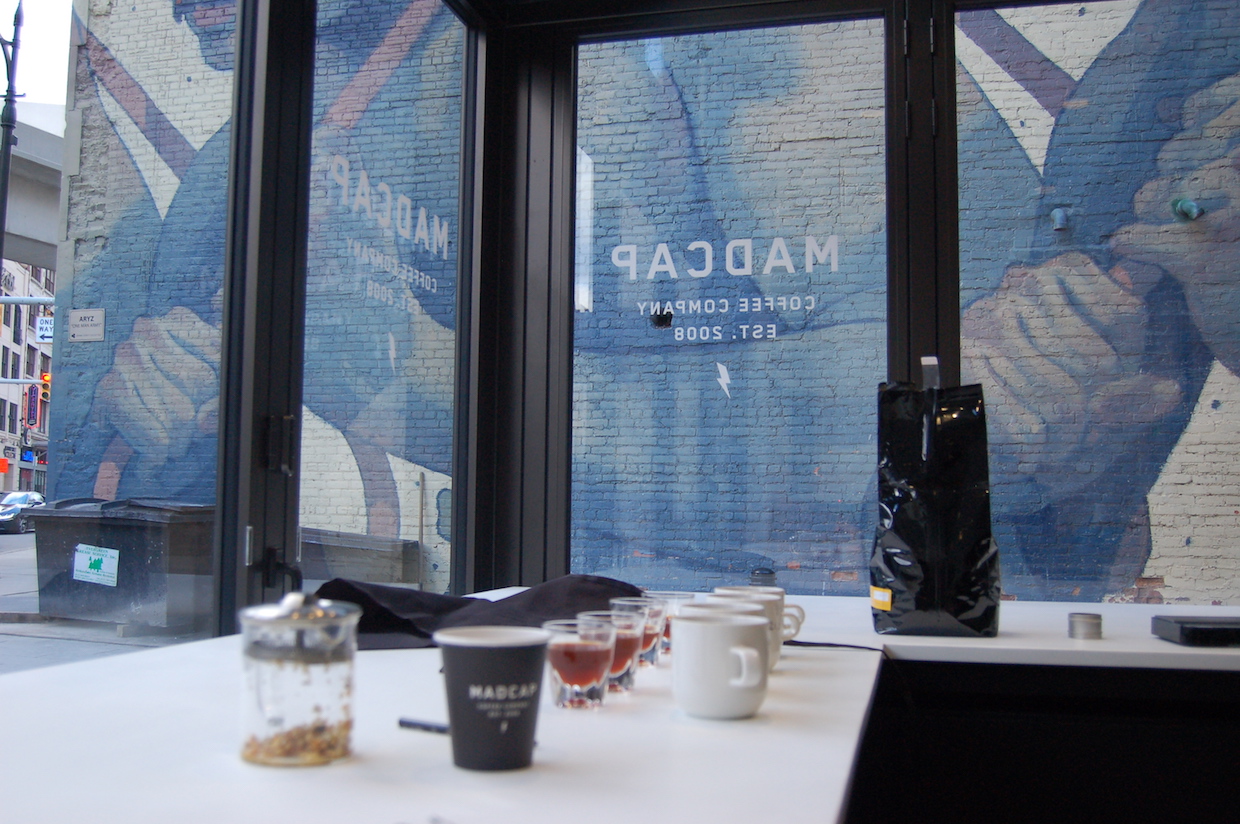 “Our goal is to build relationships with our staff and our Detroit customers. It’s not just transactions; it’s relationships.” Corlett said. “The goal is to help the community and the staff prosper. We want to share our success with everyone.”

Madcap Detroit is located at 1413 Farmer St., near the corner of Woodward Ave. in Downtown Detroit.

Craig Batory
Craig Batory is a writer, marketer, and coffee professional working and living in Detroit.