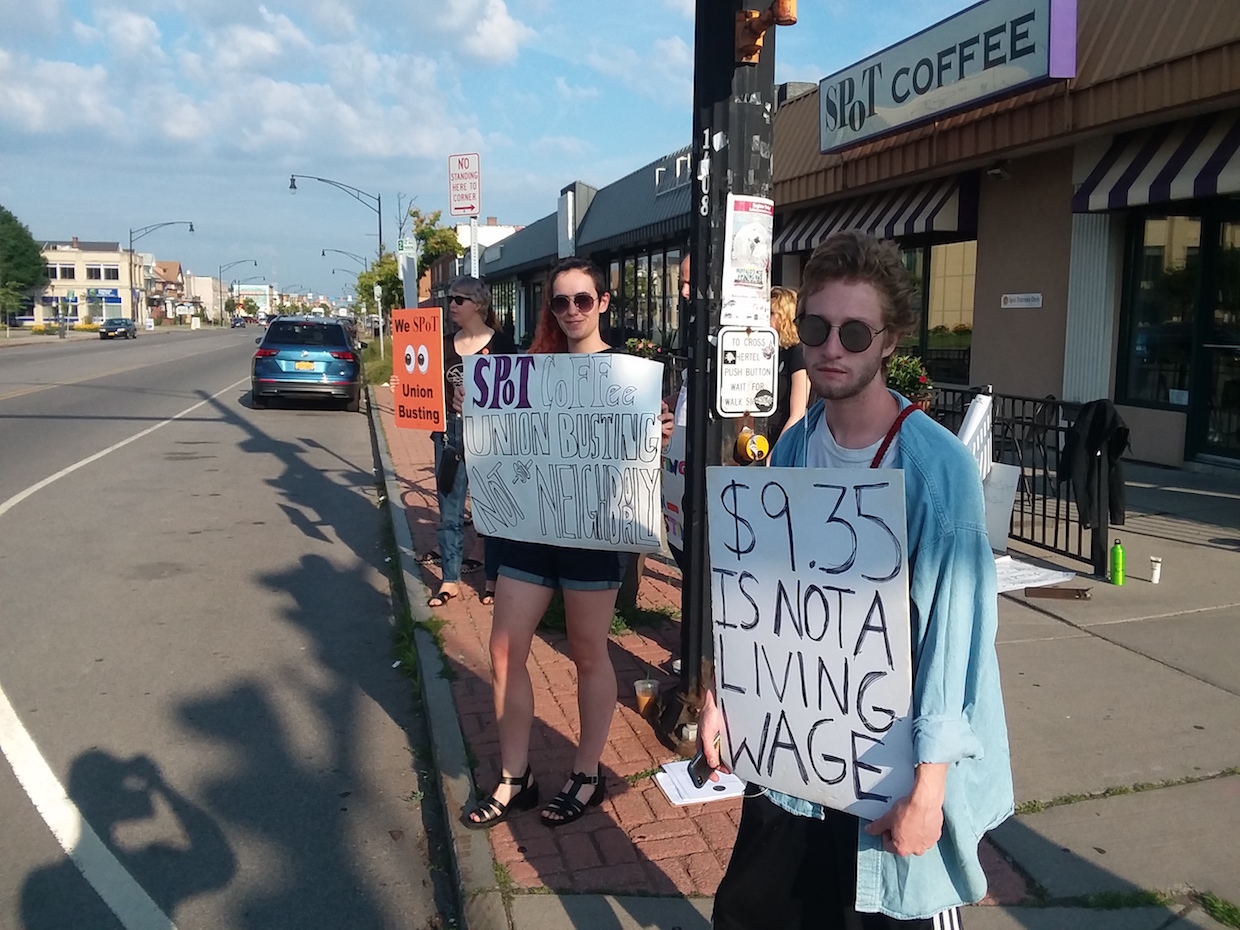 Protesters outside of a SPoT Coffee location in Buffalo today. Photo courtesy of Phoenix Cerny.

Following a successful effort to unionize by workers at the lone SPoT Coffee location in Rochester, New York, three employees at locations in the Buffalo area claim they have been illegally fired for exploring unionization.

Charges have been filed with the National Labor Relations Board (NLRB) by Workers United Rochester Regional Joint Board, the union that is representing the Rochester workers, and protests in support of the fired trio have been taking place outside numerous Buffalo locations of SPoT over the past week.

In written statements, SPoT Coffee CEO Anton Ayoub has publicly denied the allegations, saying the company supported the respected the workers’ rights to organize in Rochester, and that the workers in Buffalo were fired for legitimate reasons.

According to numerous reports, Buffalo-area SPoT employees Lukas Weinstein, Phoenix Cerny and Philip Kneitinger were all fired within days of one other after attending a meeting also attended by Cory Johnson of the Rochester location and employees of numerous Buffalo SPoT locations.

Kneitinger told Daily Coffee News that the meeting with Johnson was informational in nature, after the Rochester members voted overwhelmingly to unionize in late May.

“It was just for him to tell us his story, the story of Rochester organizing,” Kneitinger said. “It wasn’t meant to be a strategic meeting.” 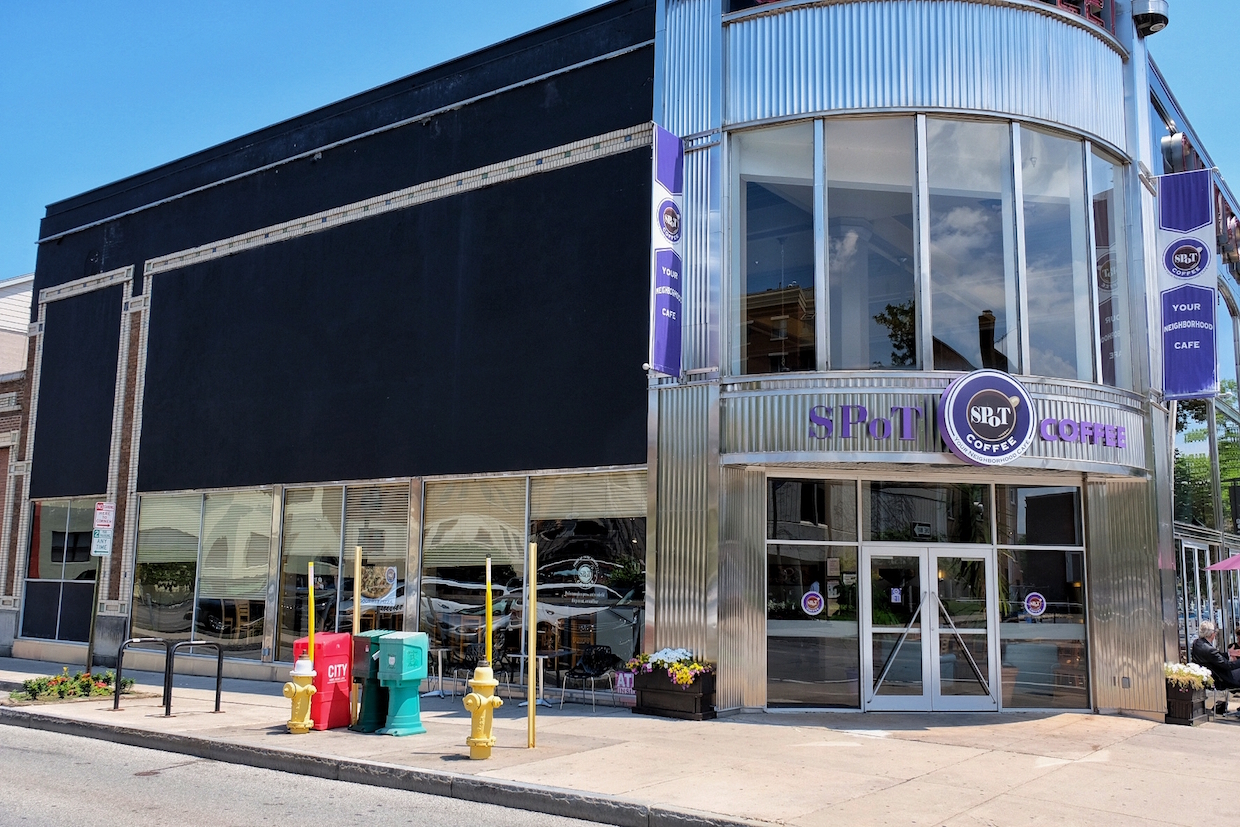 “I was never given a reason for being terminated,” Cerny said, “[but] it’s definitely because of the meeting, and perhaps the following discussions that we were having with our coworkers.”

At this time the matter concerning the discharge of three SPoT Coffee employees is now formally before the National Labor Relations Board. Consequently the company believes it is not appropriate to make any comments on these proceedings. As stated in the company’s earlier media release, SPoT Coffee continues to deny these allegations. The three employees – two of whom were part time – were discharged for lawful business reasons. The entire SPoT Coffee team greatly appreciates the support it has received from many of our customers during this difficult time.

Cerny said the intention behind filing formal charges with the NLRB is to have the three employees reinstated and to prevent the company from interfering in future union organization efforts. Said Cerny, “This has always been about the ability for us to exercise our rights, and to be respected by the company.” 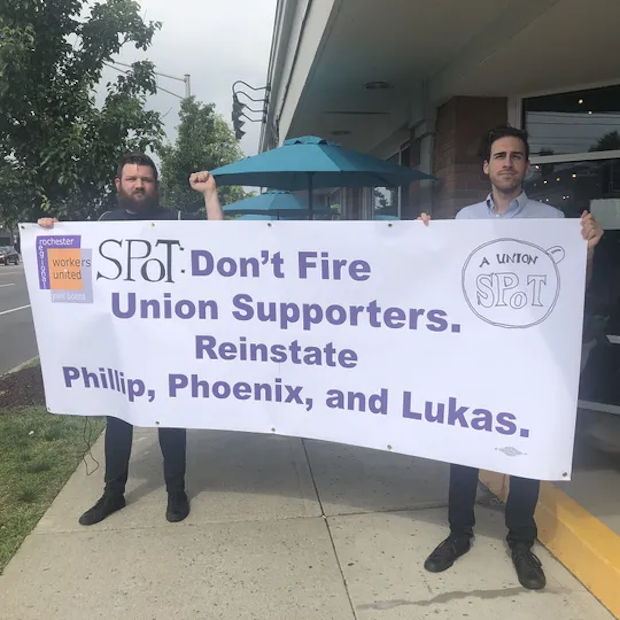 Said Kay Kennedy, a shift manager who worked with Kneitinger at the Hertel Ave. location and also attended the protests, “I think corporate made a big mistake with the way they handled their announcements, just based on how customers have reacted to it and how slow business has been for my particular cafe.”

“We’re going to continue to build support within the community, to hopefully give SPoT time to see the error of their ways and make the decision of their own accord to reinstate us,” Kneitinger said. “After reinstatement, we’ll talk to our coworkers and they may decide, via voting, that we don’t even want a union, and that’s perfectly fine. But that’s up to us to decide.”

$9.35 is not a living wage for you at this time, that is what the sign should say. There was a time in history where unions were necessary. These days a union only raises prices for all and makes you think that you don’t have to do anything to get paid more. That way of thinking will hold you back the rest of your life. Companies are looking for loyalty at the wage they pay you. So if they can find happy loyal employees for that wage, the company will succeed and so will you providing your attitude is bright. Take this humble advice or leave it.