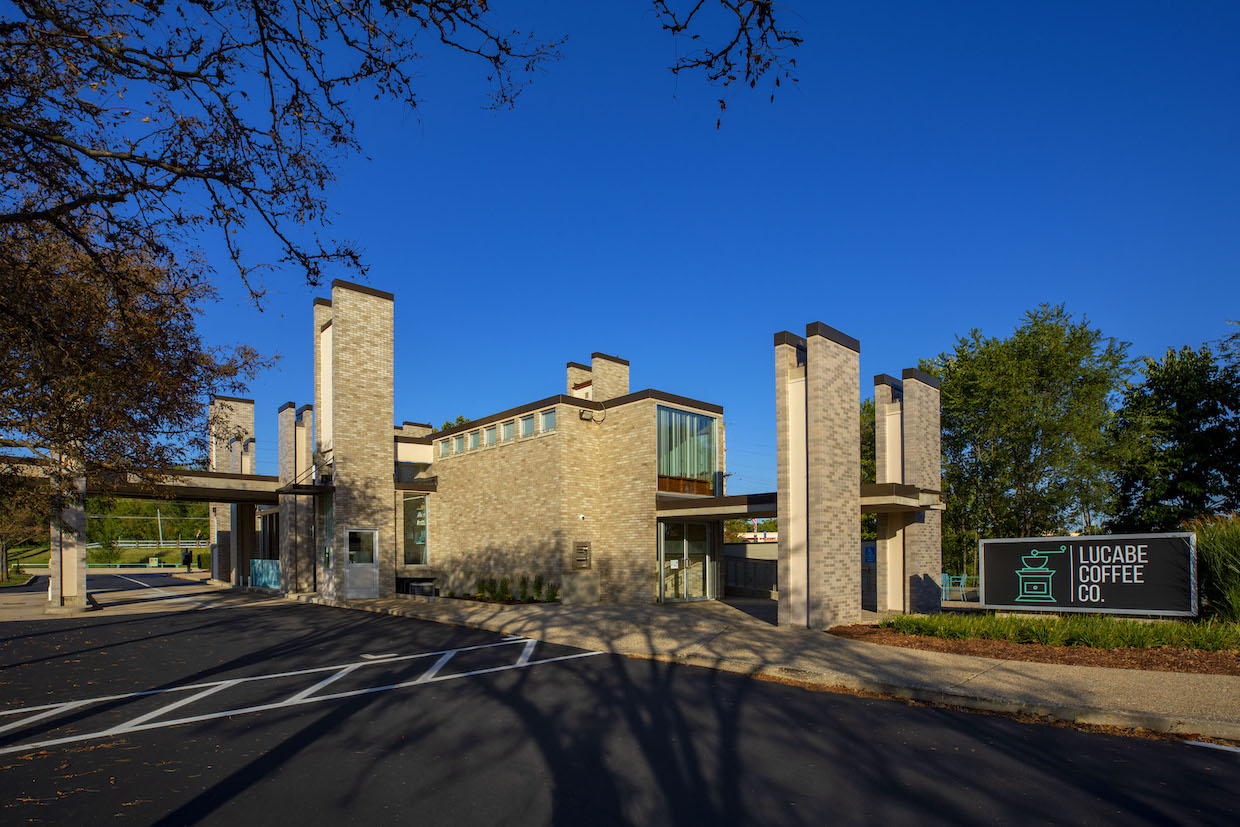 Lucabe co-owners Tyler and Alissa Hodge coordinated with the Nashville, Indiana-based architecture studio Daugherty Design Plus for a substantial remodeling of the iconic glazed brick building’s interior, giving it new life as a coffee shop while also restoring and highlighting many of the original interior details. 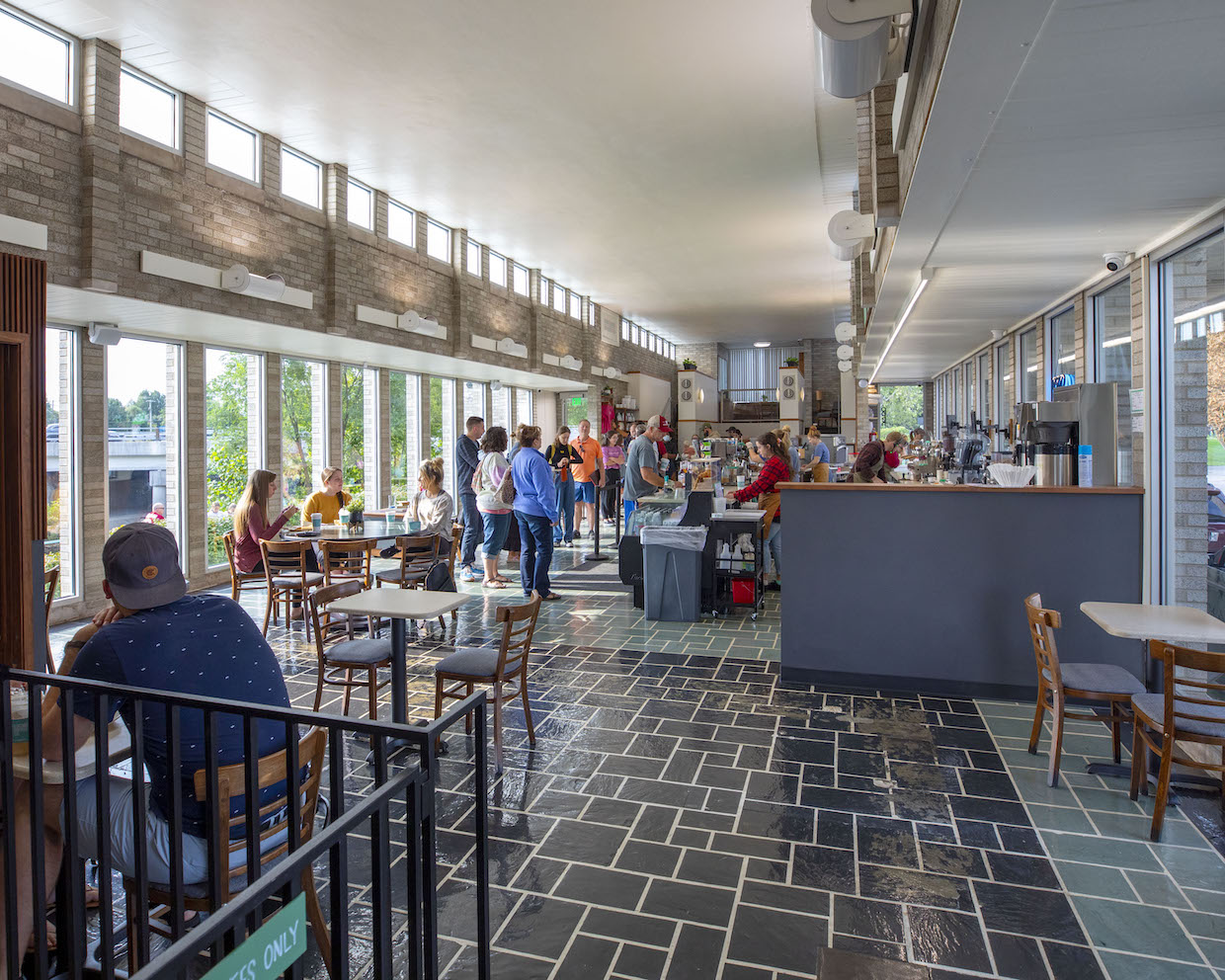 Inside the roughly 3,000-square-foot retail space, a cubicle farm was cleared out to make way for new plumbing and electrical lines to support a new quartz service counter. Carpets and glue were cleared off the floors to reveal an original alternating stone tile pattern.

Greys, black and natural wood surfaces now accentuate the sense of modern sophistication, while the original bank vault has been both converted to contain some of life’s most precious treasures. 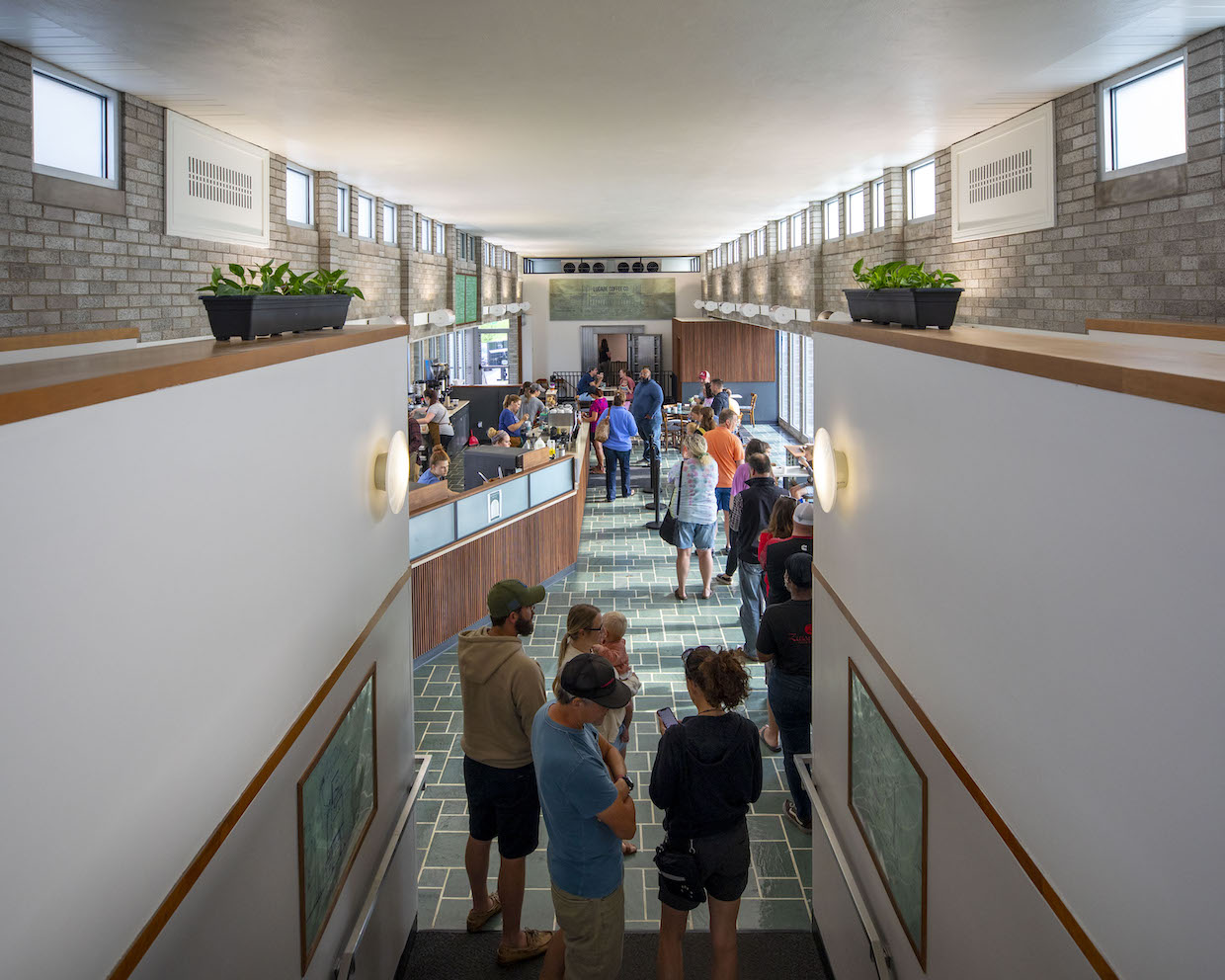 “We kept a lot of the unique elements of the vault for decor purposes, but repurposed it into the kids area,” Tyler Hodge told Daily Coffee News.

The original Lucabe location in downtown Columbus features a play area with a variety of coffee-themed toys, whereas the new shop of course offers a bank-themed play area.

Said Hodge, “We set out to design a family-friendly coffee shop where the kids feel just just as welcome as the adults do.” 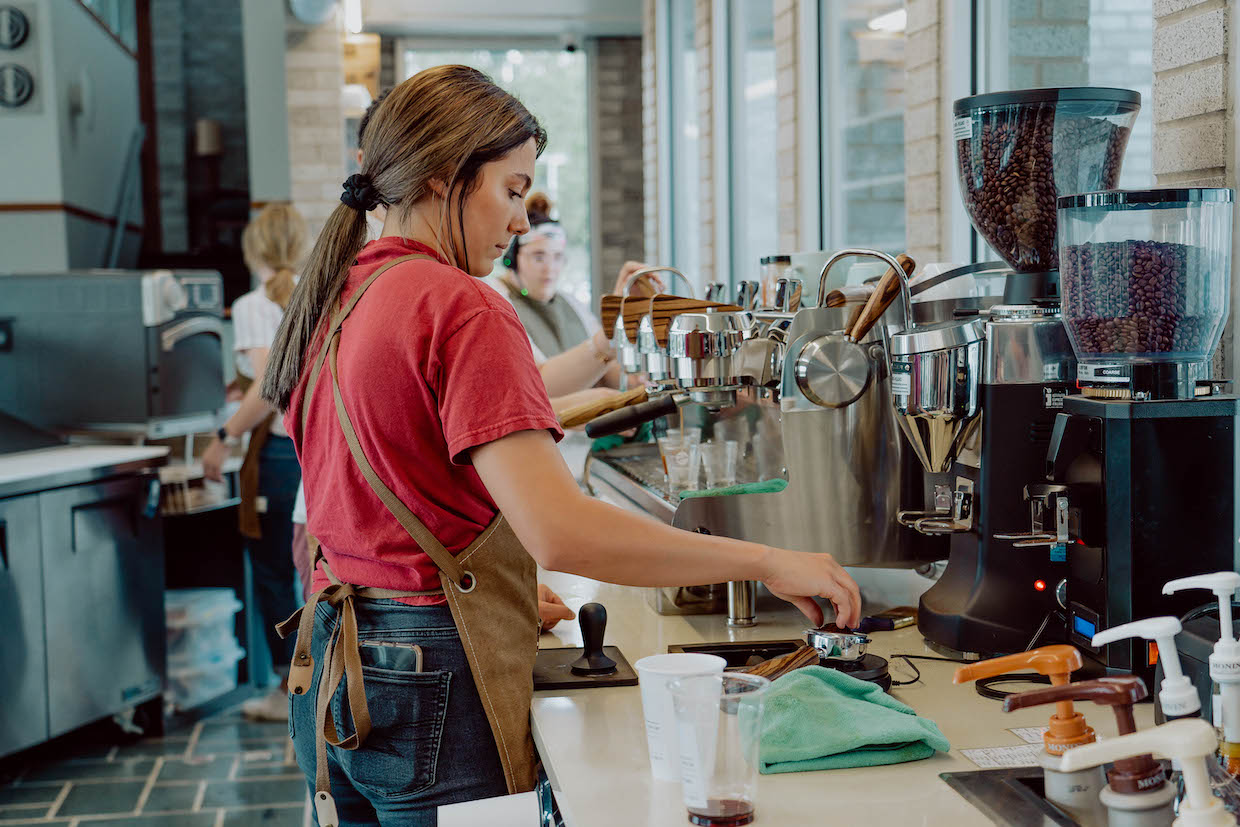 Weese, a famous Chicago modernist architect who also gained renown for historic preservation and modern railway design, designed numerous buildings in Columbus in the 1950s and 60s. The building now inhabited by Lucabe turned 60 this year.

What was originally a lane for cars has been converted into a patio seating area. However, a separate drive-through coffee station has been built into one of the building’s four castle-like crenellated towers.

In the building’s banking days, each tower housed live tellers and a system of pneumatic tubes. Lucabe repurposed three of the towers into storage spaces while through the drive-through window of the fourth, a barista gently delivers the goods.

“We couldn’t shoot coffee out of a tube, as much as we wanted to,” Hodge told DCN. “A lot of thought and intention was put into how we actually serve coffee out of that, and the adaptive reuse of that tower.” 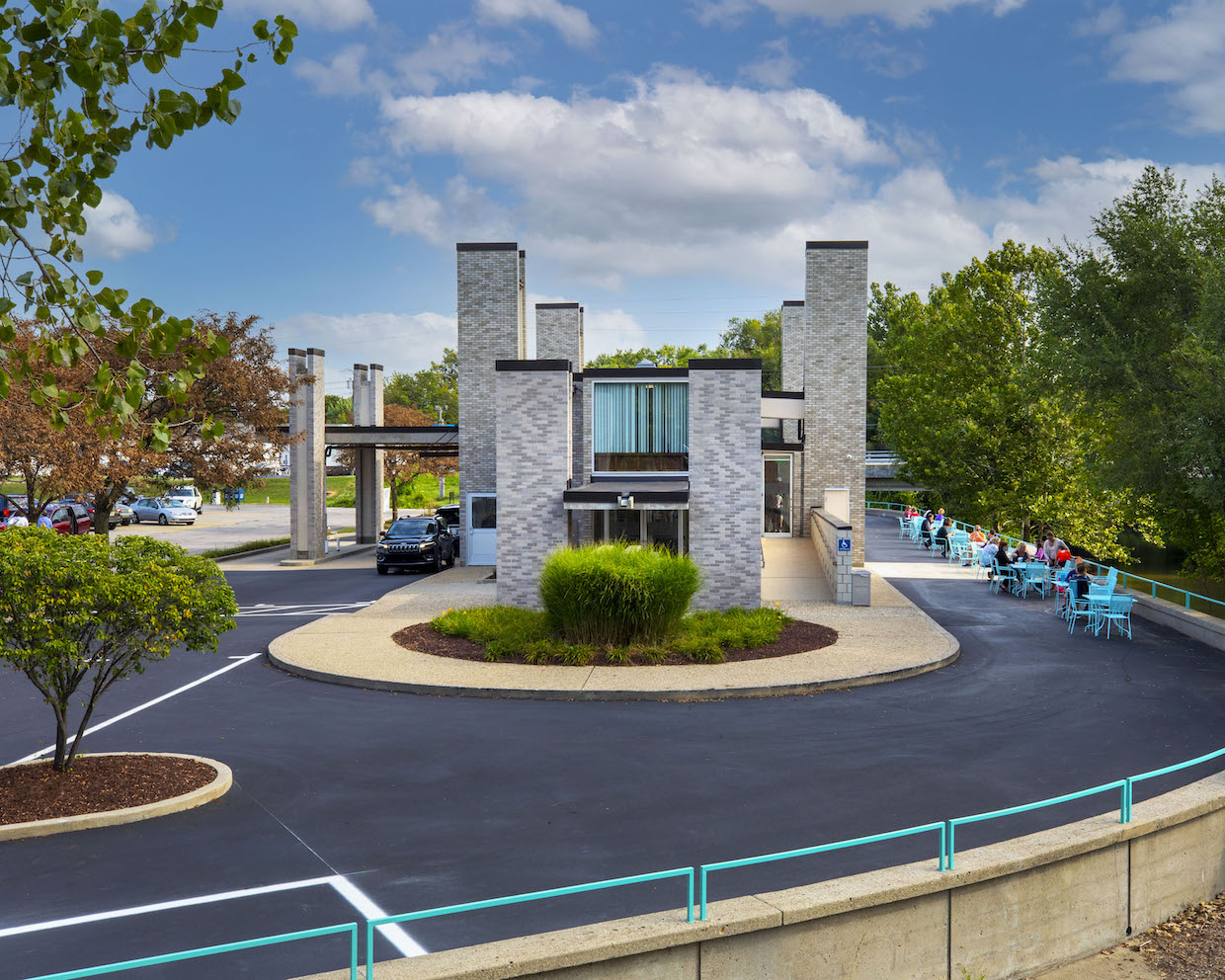 A 3-group Synesso MVP espresso machine on the “back bar” powers the fast pace of the drive through during peak times, while a La Marzocco Linea AV serves as the shop’s primary engine. Coffees for both shops, including its house blend, single-origin coffees and beans packed in Lucabe branded retail bags are roasted by Louisville, Kentucky-based Sunergos Coffee. 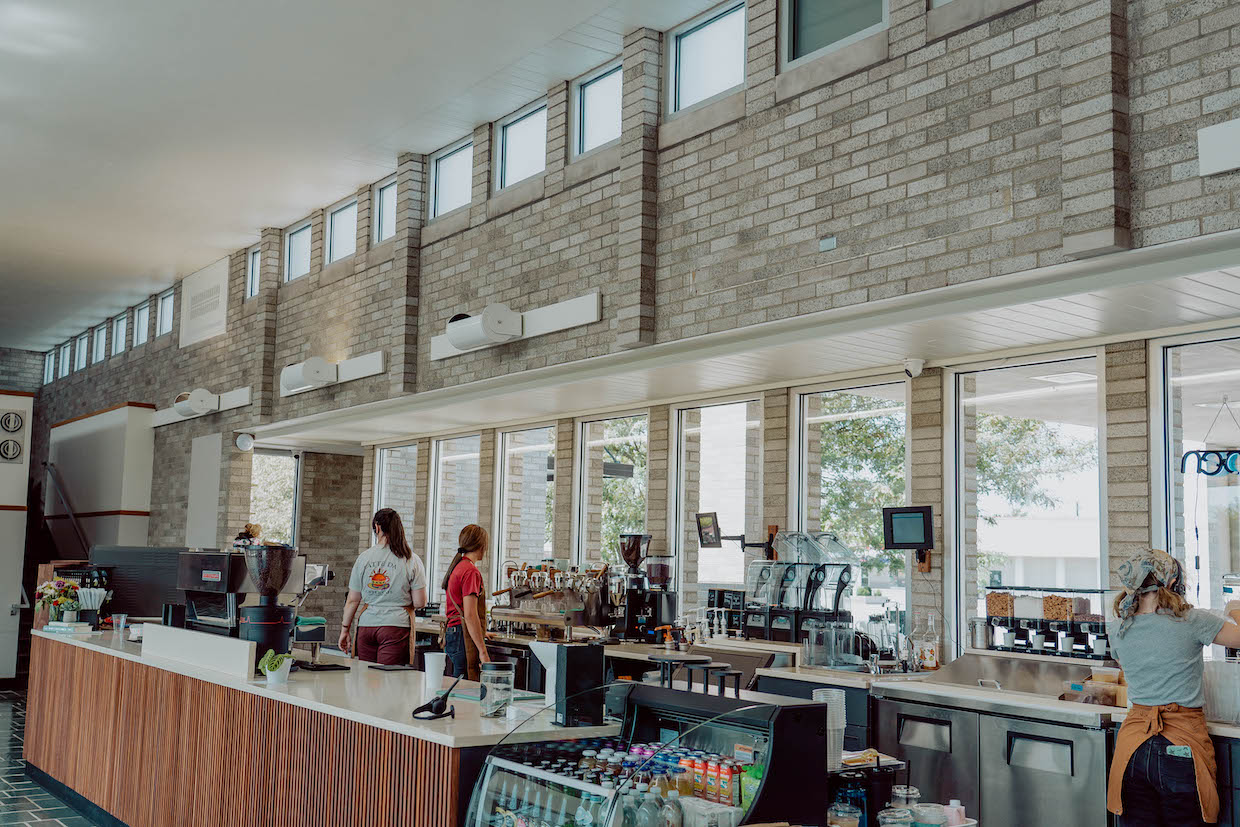 “We’ve become one of their biggest customers, and it’s a great relationship,” said Hodge. “They provide really great coffee and that allows us to focus on what we do well. We may get into roasting at some point, but at this point, creating great experiences is really what we’re all about.” 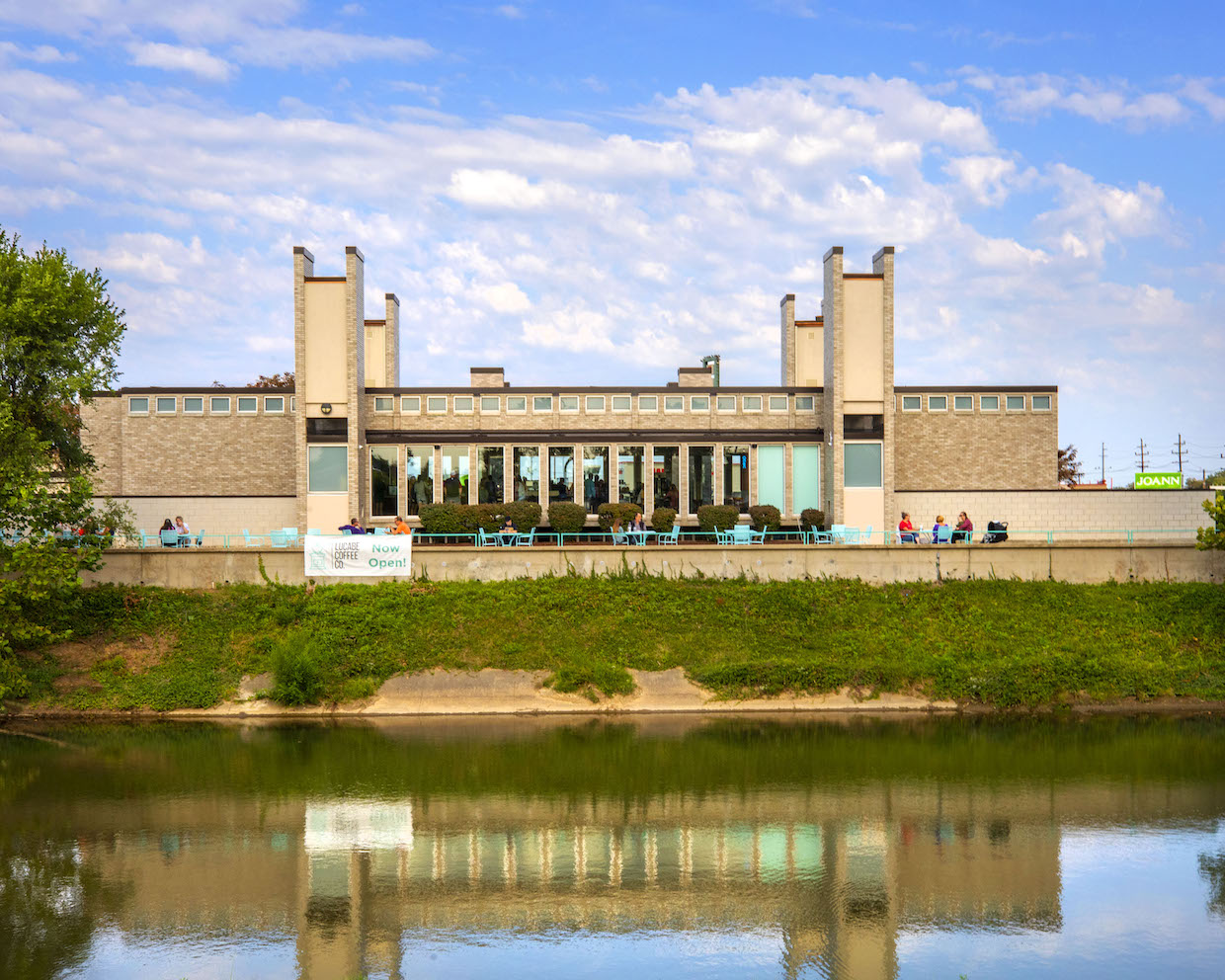 Lucabe Coffee “At the Bank” is now open at 2531 Eastbrook Plz in Columbus, Indiana. Tell us about your new coffee shop or roastery here.