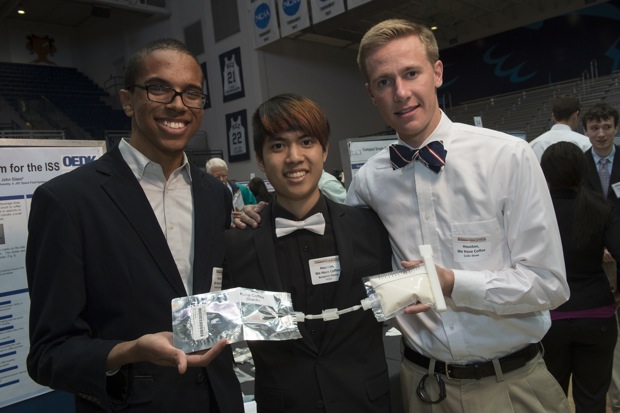 Three Rice University students have boldly gone where no researchers have gone before, creating a better coffee system for the International Space Station.

Until now, the Tang-weary astronauts aboard the ISS were unable to modify the ratios of sugar and cream in their freeze-dried coffee blends. Assuming the astronauts might want to, the Rice students began playing with space-friendly pouches and ingredients.

Currently, freeze-dried coffee blends are in aluminum pouches. Astronauts rehydrate the coffee with 70-degree Celsius water from a dispenser on the ISS and drink it through a leak-proof straw that keeps stray drops from floating throughout the station.

The students’ advisor at Johnson Space Center’s Space Food Systems Laboratory set few constraints. “He gave us a variety of plastic and aluminum pouches and adapters, and just said, ‘Go,’” Shaw said. “Our solution had to be small, lightweight, function in microgravity and proportion condiments accurately. We felt it was best addressed by making a system that supplemented the existing solution, as opposed to totally reinventing it.”

The students’ four-part system works with existing black coffee pouches. They used two-ply, heat-sealed pouches supplied by NASA for the sugar and creamer and a roller system to squeeze just the right amount through an adapter to the coffee pouch without leaking. The design was inspired by similar devices that squeeze the last drop of toothpaste out of a tube.

“I was reading an interview with an astronaut on Reddit the other day,” Shaw said, “and he was asked, ‘What’s your favorite thing up in orbit?’ He said it was the Russian shrimp and tartar sauce, because it’s crunchy and has a lot of flavor. We hope that coffee will soon be on that list.”