We received word today that the New York State Department of Economic Development has gone after New York’s Everyman Espresso for federal trademark infringement, citing the use of the “I [coffee mug] NY® logo” used by the coffee retailer. (The state is claiming the logo mimics the “I [heart] NY® logo” that it has been fighting to simultaneously protect and promote since the 1970s.) 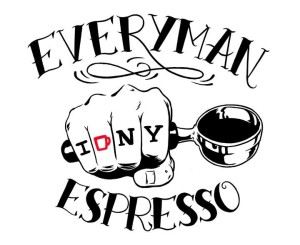 The New York Times has the full story here. In essence, the economic development office issued a cease and desist, to which Everyman quickly complied. Now the state is asking the small business to disclose how much revenue the shops earned, so it can seek compensation.

Here’s a snippet from the Times reporter Andy Newman, who got in touch with Everyman co-owner Sam Penix:

“We expect that any entity that infringes on the rights of our client compensate it for unauthorized use,” the lawyer, Clare Neumann, wrote on May 20, requesting “an accounting of all gross revenues generated during the period when the I ♥ NY® Trademark was used” to help her set the appropriate penalty.
That, in coffee parlance, has left a bitter taste in Mr. Penix’s mouth.

“Basically, it’s extortion,” he said. “It’s also ironic because we are being threatened by the entity that has vowed to grow our New York business.”

Indeed, the disconnect between the mission of the state’s economic development and its actions towards Everyman is problematic. Since opening in 2011 with a fierce dedication to promoting coffee quality while working with Counter Culture, Everyman quickly developed a reputation as one of the city’s finest shops. But even more important here has been its community-based approach. Here’s a review from Sprudge:

If you were ever certain of your own status as a weirdo, a freak, a geek, an outsider, a queer, or any combination thereof, then you know how certain spaces have the ability to transcend these labels and feel like a second home. Everyman Espresso, in New York’s East Village, is exactly that sort of place.

To accuse Everyman of propagation, however unwarranted, is one thing. To go after its owners for cash is shameful. The logo in question is based on the concepts of love and a sense of place. Of course the department of economic development has every right to protect its intellectual property, but to bring a small business within its own borders to its knees in the process is simply ugly. Sam Penix has a tattoo of the logo in question inked into the flesh of four fingers on his right hand. It is hard to ignore the permanent symbol — this is not someone who sees his shop or his place in New York as temporary.

As this regretful story plays out, we hope you’ll visit Everyman Espresso at one of its two locations, at 301 West Broadway in Soho or at 136 East 13th Street in the East Village.

Although this article brings a sour taste in my mouth after learning that NY City demanded monetary compensation from Everyman Espresso, I say victory to Everyman Espresso! Because of this article, now I know that this coffee shop exists! This is a classic example of bad publicity is good publicity! Bravo! I will definitely check this place out when I go to NY!

This is why businesses and people are leaving NYC and the Northeast in general. Very hostile towards small business!